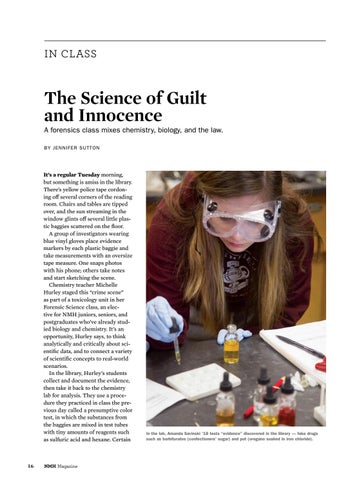 The Science of Guilt and Innocence

It’s a regular Tuesday morning, but something is amiss in the library. There’s yellow police tape cordoning off several corners of the reading room. Chairs and tables are tipped over, and the sun streaming in the window glints off several little plastic baggies scattered on the floor. A group of investigators wearing blue vinyl gloves place evidence markers by each plastic baggie and take measurements with an oversize tape measure. One snaps photos with his phone; others take notes and start sketching the scene. Chemistry teacher Michelle Hurley staged this “crime scene” as part of a toxicology unit in her Forensic Science class, an elective for NMH juniors, seniors, and postgraduates who’ve already studied biology and chemistry. It’s an opportunity, Hurley says, to think analytically and critically about scientific data, and to connect a variety of scientific concepts to real-world scenarios. In the library, Hurley’s students collect and document the evidence, then take it back to the chemistry lab for analysis. They use a procedure they practiced in class the previous day called a presumptive color test, in which the substances from the baggies are mixed in test tubes with tiny amounts of reagents such as sulfuric acid and hexane. Certain

In the lab, Amanda Savinski ’18 tests “evidence” discovered in the library — fake drugs such as barbiturates (confectioners’ sugar) and pot (oregano soaked in iron chloride).