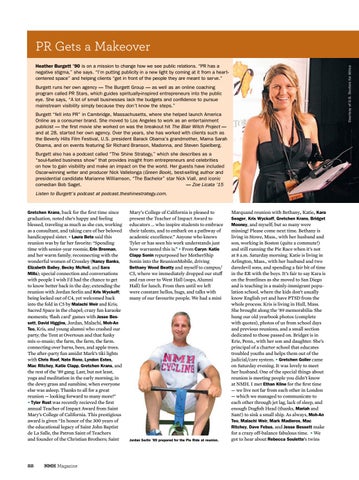 PR Gets a Makeover Courtesy of U.S. Doctors for Africa

Heather Burgett ’90 is on a mission to change how we see public relations. “PR has a negative stigma,” she says. “I’m putting publicity in a new light by coming at it from a heartcentered space” and helping clients “get in front of the people they are meant to serve.” Burgett runs her own agency — The Burgett Group — as well as an online coaching program called PR Stars, which guides spiritually-inspired entrepreneurs into the public eye. She says, “A lot of small businesses lack the budgets and confidence to pursue mainstream visibility simply because they don’t know the steps.” Burgett “fell into PR” in Cambridge, Massachusetts, where she helped launch America Online as a consumer brand. She moved to Los Angeles to work as an entertainment publicist — the first movie she worked on was the breakout hit The Blair Witch Project — and at 28, started her own agency. Over the years, she has worked with clients such as the Beverly Hills Film Festival, U.S. president Barack Obama’s grandmother, Mama Sarah Obama, and on events featuring Sir Richard Branson, Madonna, and Steven Spielberg. Burgett also has a podcast called “The Shine Strategy,” which she describes as a “soul-fueled business show” that provides insight from entrepreneurs and celebrities on how to gain visibility and make an impact on the the world. Her guests have included Oscar-winning writer and producer Nick Vallelonga (Green Book), best-selling author and presidential candidate Marianne Williamson, “The Bachelor” star Nick Viall, and iconic comedian Bob Saget. — Zoe Licata ’15 Listen to Burgett’s podcast at podcast.theshinestrategy.com.

Gretchen Krans, back for the first time since graduation, noted she’s happy and feeling blessed, traveling as much as she can, working as a consultant, and taking care of her beloved handicapped sister. • Laura Bete said this reunion was by far her favorite: “Spending time with senior-year roomie, Erin Brennan, and her warm family; reconnecting with the wonderful women of Crossley (Nancy Banks, Elizabeth Bailey, Becky McNeil, and Sara Mills); special connection and conversations with people I wish I’d had the chance to get to know better back in the day; extending the reunion with Jordan Serlin and Kris Wyckoff; being locked out of C4, yet welcomed back into the fold in C5 by Malachi Weir and Kris; Sacred Space in the chapel; crazy fun karaoke moments; ‘flash card’ games with Jesse Bessett, David Higgins, Jordan, Malachi, Moh-An Teo, Kris, and young alumni who crashed our party; the Tent at Overtoun and that funky mix-o-music; the farm, the farm, the farm. connecting over barns, bees, and apple trees. The after-party fun amidst Mark’s tiki lights with Chris Roof, Nate Rono, Lyndon Estes, Mac Ritchey, Katie Clapp, Gretchen Krans, and the rest of the ’89 gang. Last, but not least, yoga and meditation in the early morning, in the dewy grass and sunshine, when everyone else was asleep. Thanks to all for a great reunion — looking forward to many more!” • Tyler Rust was recently recieved the first annual Teacher of Impact Award from Saint Mary’s College of California. This prestigious award is given “In honor of the 300 years of the educational legacy of Saint John Baptist de La Salle, the Patron Saint of Teachers and founder of the Christian Brothers; Saint

Mary’s College of California is pleased to present the Teacher of Impact Award to educators … who inspire students to embrace their talents, and to embark on a pathway of academic excellence.” Anyone who knows Tyler or has seen his work understands just how warranted this is.” • From Caryn: Katie Clapp Sonin repurposed her MotherShip Sonin into the ReunionMobile, driving Bethany Wood Beatty and myself to campus/ C5, where we immediately dropped our stuff and ran over to West Hall (oops, Alumni Hall) for lunch. From then until we left were constant hellos, hugs, and talks with many of our favourite people. We had a mini

Jordan Serlin ’89 prepared for the Pie Ride at reunion.

Marquand reunion with Bethany, Katie, Kara Seager, Kris Wyckoff, Gretchen Krans, Bridget Mooney, and myself; but so many were missing! Please come next time. Bethany is living in Stowe, Mass., with her husband and son, working in Boston (quite a commute!) and still running the Pie Race when it’s not at 8 a.m. Saturday morning. Katie is living in Arlington, Mass., with her husband and two daredevil sons, and spending a fair bit of time in the ER with the boys. It’s fair to say Kara is on the frontlines as she moved to San Diego and is teaching in a mainly-immigrant population school, where the kids don’t usually know English yet and have PTSD from the whole process. Kris is living in Hull, Mass. She brought along the ’89 memorabilia: She hung our old yearbook photos (complete with quotes), photos of us from school days and previous reunions, and a small section dedicated to those passed on. Bridget is in Erie, Penn., with her son and daughter. She’s principal of a charter school that educates troubled youths and helps them out of the judicial/care system. • Gretchen Goller came on Saturday evening. It was lovely to meet her husband. One of the special things about reunion is meeting people you didn’t know at NMH. I met Ethan Kline for the first time — we live not far from each other in London — which we managed to communicate to each other through jet lag, lack of sleep, and enough Dogfish Head (thanks, Mariah and Sam!) to sink a small ship. As always, Moh-An Teo, Malachi Weir, Mark Madieros, Mac Ritchey, Dave Febus, and Jesse Bessett make for a crazy off-balance fabulous time. • We got to hear about Rebecca Soulette’s twins