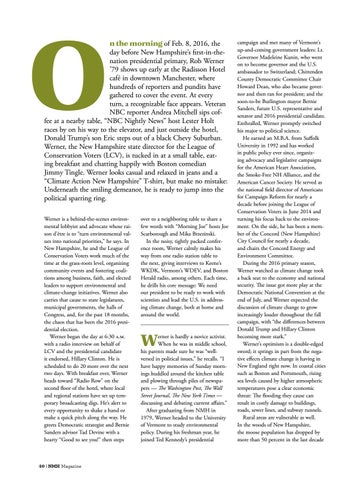 n the morning of Feb. 8, 2016, the day before New Hampshire’s first-in-thenation presidential primary, Rob Werner ’79 shows up early at the Radisson Hotel café in downtown Manchester, where hundreds of reporters and pundits have gathered to cover the event. At every turn, a recognizable face appears. Veteran NBC reporter Andrea Mitchell sips coffee at a nearby table, “NBC Nightly News” host Lester Holt races by on his way to the elevator, and just outside the hotel, Donald Trump’s son Eric steps out of a black Chevy Suburban. Werner, the New Hampshire state director for the League of Conservation Voters (LCV), is tucked in at a small table, eating breakfast and chatting happily with Boston comedian Jimmy Tingle. Werner looks casual and relaxed in jeans and a “Climate Action New Hampshire” T-shirt, but make no mistake: Underneath the smiling demeanor, he is ready to jump into the political sparring ring. Werner is a behind-the-scenes environmental lobbyist and advocate whose raison d’être is to “turn environmental values into national priorities,” he says. In New Hampshire, he and the League of Conservation Voters work much of the time at the grass-roots level, organizing community events and fostering coalitions among business, faith, and elected leaders to support environmental and climate-change initiatives. Werner also carries that cause to state legislatures, municipal governments, the halls of Congress, and, for the past 18 months, the chaos that has been the 2016 presidential election. Werner began the day at 6:30 a.m. with a radio interview on behalf of LCV and the presidential candidate it endorsed, Hillary Clinton. He is scheduled to do 20 more over the next two days. With breakfast over, Werner heads toward “Radio Row” on the second floor of the hotel, where local and regional stations have set up temporary broadcasting digs. He’s alert to every opportunity to shake a hand or make a quick pitch along the way. He greets Democratic strategist and Bernie Sanders advisor Tad Devine with a hearty “Good to see you!” then steps

over to a neighboring table to share a few words with “Morning Joe” hosts Joe Scarborough and Mika Brzezinski. In the noisy, tightly packed conference room, Werner calmly makes his way from one radio station table to the next, giving interviews to Keene’s WKDK, Vermont’s WDEV, and Boston Herald radio, among others. Each time, he drills his core message: We need our president to be ready to work with scientists and lead the U.S. in addressing climate change, both at home and around the world.

erner is hardly a novice activist. When he was in middle school, his parents made sure he was “wellversed in political issues,” he recalls. “I have happy memories of Sunday mornings huddled around the kitchen table and plowing through piles of newspapers — The Washington Post, The Wall Street Journal, The New York Times — discussing and debating current affairs.” After graduating from NMH in 1979, Werner headed to the University of Vermont to study environmental policy. During his freshman year, he joined Ted Kennedy’s presidential

campaign and met many of Vermont’s up-and-coming government leaders: Lt. Governor Madeleine Kunin, who went on to become governor and the U.S. ambassador to Switzerland; Chittenden County Democratic Committee Chair Howard Dean, who also became governor and then ran for president; and the soon-to-be Burlington mayor Bernie Sanders, future U.S. representative and senator and 2016 presidential candidate. Enthralled, Werner promptly switched his major to political science. He earned an M.B.A. from Suffolk University in 1992 and has worked in public policy ever since, organizing advocacy and legislative campaigns for the American Heart Association, the Smoke-Free NH Alliance, and the American Cancer Society. He served as the national field director of Americans for Campaign Reform for nearly a decade before joining the League of Conservation Voters in June 2014 and turning his focus back to the environment. On the side, he has been a member of the Concord (New Hampshire) City Council for nearly a decade, and chairs the Concord Energy and Environment Committee. During the 2016 primary season, Werner watched as climate change took a back seat to the economy and national security. The issue got more play at the Democratic National Convention at the end of July, and Werner expected the discussion of climate change to grow increasingly louder throughout the fall campaign, with “the differences between Donald Trump and Hillary Clinton becoming more stark.” Werner’s optimism is a double-edged sword; it springs in part from the negative effects climate change is having in New England right now. In coastal cities such as Boston and Portsmouth, rising sea levels caused by higher atmospheric temperatures pose a clear economic threat: The flooding they cause can result in costly damage to buildings, roads, sewer lines, and subway tunnels. Rural areas are vulnerable as well. In the woods of New Hampshire, the moose population has dropped by more than 50 percent in the last decade