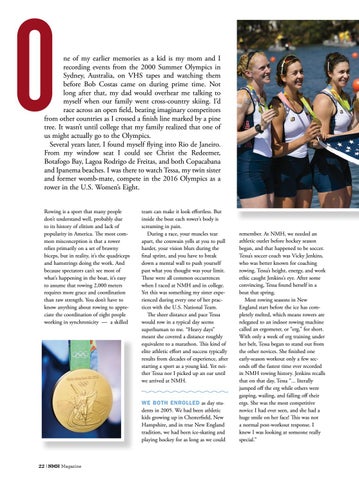 ne of my earlier memories as a kid is my mom and I recording events from the 2000 Summer Olympics in Sydney, Australia, on VHS tapes and watching them before Bob Costas came on during prime time. Not long after that, my dad would overhear me talking to myself when our family went cross-country skiing. I’d race across an open field, beating imaginary competitors from other countries as I crossed a finish line marked by a pine tree. It wasn’t until college that my family realized that one of us might actually go to the Olympics. Several years later, I found myself flying into Rio de Janeiro. From my window seat I could see Christ the Redeemer, Botafogo Bay, Lagoa Rodrigo de Freitas, and both Copacabana and Ipanema beaches. I was there to watch Tessa, my twin sister and former womb-mate, compete in the 2016 Olympics as a rower in the U.S. Women’s Eight. Rowing is a sport that many people don’t understand well, probably due to its history of elitism and lack of popularity in America. The most common misconception is that a rower relies primarily on a set of brawny biceps, but in reality, it’s the quadriceps and hamstrings doing the work. And because spectators can’t see most of what’s happening in the boat, it’s easy to assume that rowing 2,000 meters requires more grace and coordination than raw strength. You don’t have to know anything about rowing to appreciate the coordination of eight people working in synchronicity — a skilled

team can make it look effortless. But inside the boat each rower’s body is screaming in pain. During a race, your muscles tear apart, the coxswain yells at you to pull harder, your vision blurs during the final sprint, and you have to break down a mental wall to push yourself past what you thought was your limit. These were all common occurrences when I raced at NMH and in college. Yet this was something my sister experienced during every one of her practices with the U.S. National Team. The sheer distance and pace Tessa would row in a typical day seems superhuman to me. “Heavy days” meant she covered a distance roughly equivalent to a marathon. This kind of elite athletic effort and success typically results from decades of experience, after starting a sport as a young kid. Yet neither Tessa nor I picked up an oar until we arrived at NMH.

WE BOTH ENROLLED as day students in 2005. We had been athletic kids growing up in Chesterfield, New Hampshire, and in true New England tradition, we had been ice-skating and playing hockey for as long as we could

remember. At NMH, we needed an athletic outlet before hockey season began, and that happened to be soccer. Tessa’s soccer coach was Vicky Jenkins, who was better known for coaching rowing. Tessa’s height, energy, and work ethic caught Jenkins’s eye. After some convincing, Tessa found herself in a boat that spring. Most rowing seasons in New England start before the ice has completely melted, which means rowers are relegated to an indoor rowing machine called an ergometer, or “erg,” for short. With only a week of erg training under her belt, Tessa began to stand out from the other novices. She finished one early-season workout only a few seconds off the fastest time ever recorded in NMH rowing history. Jenkins recalls that on that day, Tessa “... literally jumped off the erg while others were gasping, wailing, and falling off their ergs. She was the most competitive novice I had ever seen, and she had a huge smile on her face! This was not a normal post-workout response. I knew I was looking at someone really special.”