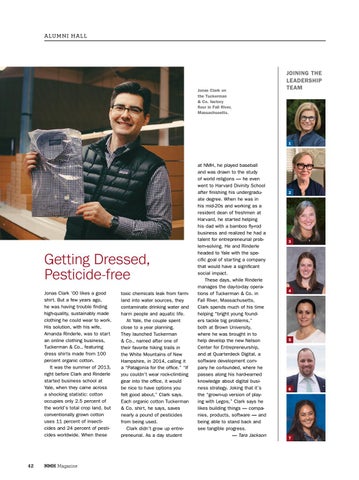 Getting Dressed, Pesticide-free Jonas Clark ’00 likes a good shirt. But a few years ago, he was having trouble finding high-quality, sustainably made clothing he could wear to work. His solution, with his wife, Amanda Rinderle, was to start an online clothing business, Tuckerman &amp; Co., featuring dress shirts made from 100 percent organic cotton. It was the summer of 2013, right before Clark and Rinderle started business school at Yale, when they came across a shocking statistic: cotton occupies only 2.5 percent of the world’s total crop land, but conventionally grown cotton uses 11 percent of insecticides and 24 percent of pesticides worldwide. When these

toxic chemicals leak from farmland into water sources, they contaminate drinking water and harm people and aquatic life. At Yale, the couple spent close to a year planning. They launched Tuckerman &amp; Co., named after one of their favorite hiking trails in the White Mountains of New Hampshire, in 2014, calling it a “Patagonia for the office.” “If you couldn’t wear rock-climbing gear into the office, it would be nice to have options you felt good about,” Clark says. Each organic cotton Tuckerman &amp; Co. shirt, he says, saves nearly a pound of pesticides from being used. Clark didn’t grow up entrepreneurial. As a day student

at NMH, he played baseball and was drawn to the study of world religions — he even went to Harvard Divinity School after finishing his undergraduate degree. When he was in his mid-20s and working as a resident dean of freshmen at Harvard, he started helping his dad with a bamboo fly-rod business and realized he had a talent for entrepreneurial problem-solving. He and Rinderle headed to Yale with the specific goal of starting a company that would have a significant social impact. These days, while Rinderle manages the day-to-day operations of Tuckerman &amp; Co. in Fall River, Massachusetts, Clark spends much of his time helping “bright young founders tackle big problems,” both at Brown University, where he was brought in to help develop the new Nelson Center for Entrepreneurship, and at Quarterdeck Digital, a software development company he co-founded, where he passes along his hard-earned knowledge about digital business strategy. Joking that it’s the “grown-up version of playing with Legos,” Clark says he likes building things — companies, products, software — and being able to stand back and see tangible progress. — Tara Jackson