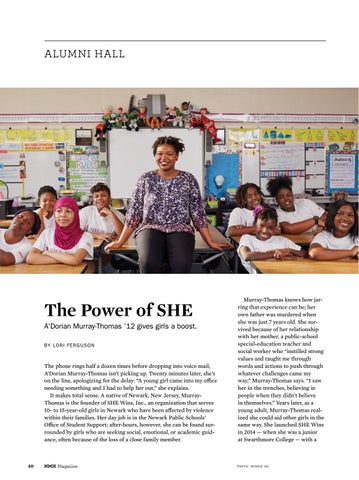 The phone rings half a dozen times before dropping into voice mail; A’Dorian Murray-Thomas isn’t picking up. Twenty minutes later, she’s on the line, apologizing for the delay: “A young girl came into my office needing something and I had to help her out,” she explains. It makes total sense. A native of Newark, New Jersey, MurrayThomas is the founder of SHE Wins, Inc., an organization that serves 10- to 15-year-old girls in Newark who have been affected by violence within their families. Her day job is in the Newark Public Schools’ Office of Student Support; after-hours, however, she can be found surrounded by girls who are seeking social, emotional, or academic guidance, often because of the loss of a close family member.

Murray-Thomas knows how jarring that experience can be; her own father was murdered when she was just 7 years old. She survived because of her relationship with her mother, a public-school special-education teacher and social worker who “instilled strong values and taught me through words and actions to push through whatever challenges came my way,” Murray-Thomas says. “I saw her in the trenches, believing in people when they didn’t believe in themselves.” Years later, as a young adult, Murray-Thomas realized she could aid other girls in the same way. She launched SHE Wins in 2014 — when she was a junior at Swarthmore College — with a

The Power of SHE A’Dorian Murray-Thomas ’12 gives girls a boost. B Y LOR I FER G USO N