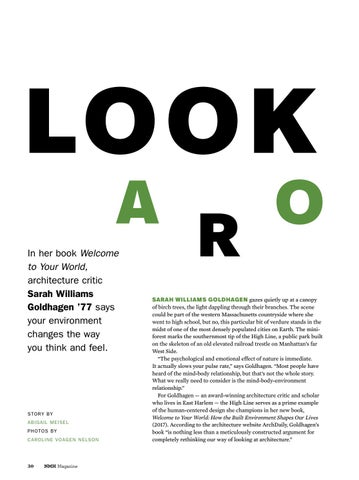 In her book Welcome to Your World, architecture critic Sarah Williams Goldhagen ’77 says your environment changes the way you think and feel.

SARAH WILLIAMS GOLDHAGEN gazes quietly up at a canopy of birch trees, the light dappling through their branches. The scene could be part of the western Massachusetts countryside where she went to high school, but no, this particular bit of verdure stands in the midst of one of the most densely populated cities on Earth. The miniforest marks the southernmost tip of the High Line, a public park built on the skeleton of an old elevated railroad trestle on Manhattan’s far West Side. “The psychological and emotional effect of nature is immediate. It actually slows your pulse rate,” says Goldhagen. “Most people have heard of the mind-body relationship, but that’s not the whole story. What we really need to consider is the mind-body-environment relationship.” For Goldhagen — an award-winning architecture critic and scholar who lives in East Harlem — the High Line serves as a prime example of the human-centered design she champions in her new book, Welcome to Your World: How the Built Environment Shapes Our Lives (2017). According to the architecture website ArchDaily, Goldhagen’s book “is nothing less than a meticulously constructed argument for completely rethinking our way of looking at architecture.”