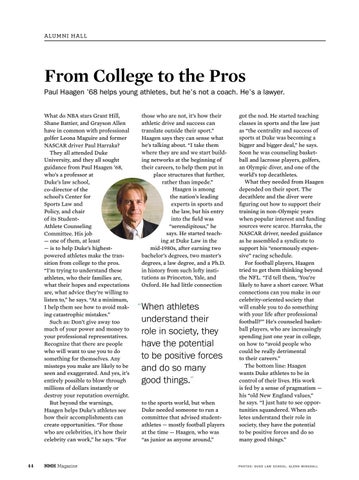 From College to the Pros Paul Haagen ’68 helps young athletes, but he’s not a coach. He’s a lawyer. What do NBA stars Grant Hill, Shane Battier, and Grayson Allen have in common with professional golfer Leona Maguire and former NASCAR driver Paul Harraka? They all attended Duke University, and they all sought guidance from Paul Haagen ’68, who’s a professor at Duke’s law school, co-director of the school’s Center for Sports Law and Policy, and chair of its StudentAthlete Counseling Committee. His job — one of them, at least — is to help Duke’s highestpowered athletes make the transition from college to the pros. “I’m trying to understand these athletes, who their families are, what their hopes and expectations are, what advice they’re willing to listen to,” he says. “At a minimum, I help them see how to avoid making catastrophic mistakes.” Such as: Don’t give away too much of your power and money to your professional representatives. Recognize that there are people who will want to use you to do something for themselves. Any missteps you make are likely to be seen and exaggerated. And yes, it’s entirely possible to blow through millions of dollars instantly or destroy your reputation overnight. But beyond the warnings, Haagen helps Duke’s athletes see how their accomplishments can create opportunities. “For those who are celebrities, it’s how their celebrity can work,” he says. “For

those who are not, it’s how their athletic drive and success can translate outside their sport.” Haagen says they can sense what he’s talking about. “I take them where they are and we start building networks at the beginning of their careers, to help them put in place structures that further, rather than impede.” Haagen is among the nation’s leading experts in sports and the law, but his entry into the field was “serendipitous,” he says. He started teaching at Duke Law in the mid-1980s, after earning two bachelor’s degrees, two master’s degrees, a law degree, and a Ph.D. in history from such lofty institutions as Princeton, Yale, and Oxford. He had little connection

“ When athletes understand their role in society, they have the potential to be positive forces and do so many good things.” to the sports world, but when Duke needed someone to run a committee that advised studentathletes — mostly football players at the time — Haagen, who was “as junior as anyone around,”

got the nod. He started teaching classes in sports and the law just as “the centrality and success of sports at Duke was becoming a bigger and bigger deal,” he says. Soon he was counseling basketball and lacrosse players, golfers, an Olympic diver, and one of the world’s top decathletes. What they needed from Haagen depended on their sport. The decathlete and the diver were figuring out how to support their training in non-Olympic years when popular interest and funding sources were scarce. Harraka, the NASCAR driver, needed guidance as he assembled a syndicate to support his “enormously expensive” racing schedule. For football players, Haagen tried to get them thinking beyond the NFL. “I’d tell them, ‘You’re likely to have a short career. What connections can you make in our celebrity-oriented society that will enable you to do something with your life after professional football?’” He’s counseled basketball players, who are increasingly spending just one year in college, on how to “avoid people who could be really detrimental to their careers.” The bottom line: Haagen wants Duke athletes to be in control of their lives. His work is fed by a sense of pragmatism — his “old New England values,” he says. “I just hate to see opportunities squandered. When athletes understand their role in society, they have the potential to be positive forces and do so many good things.” 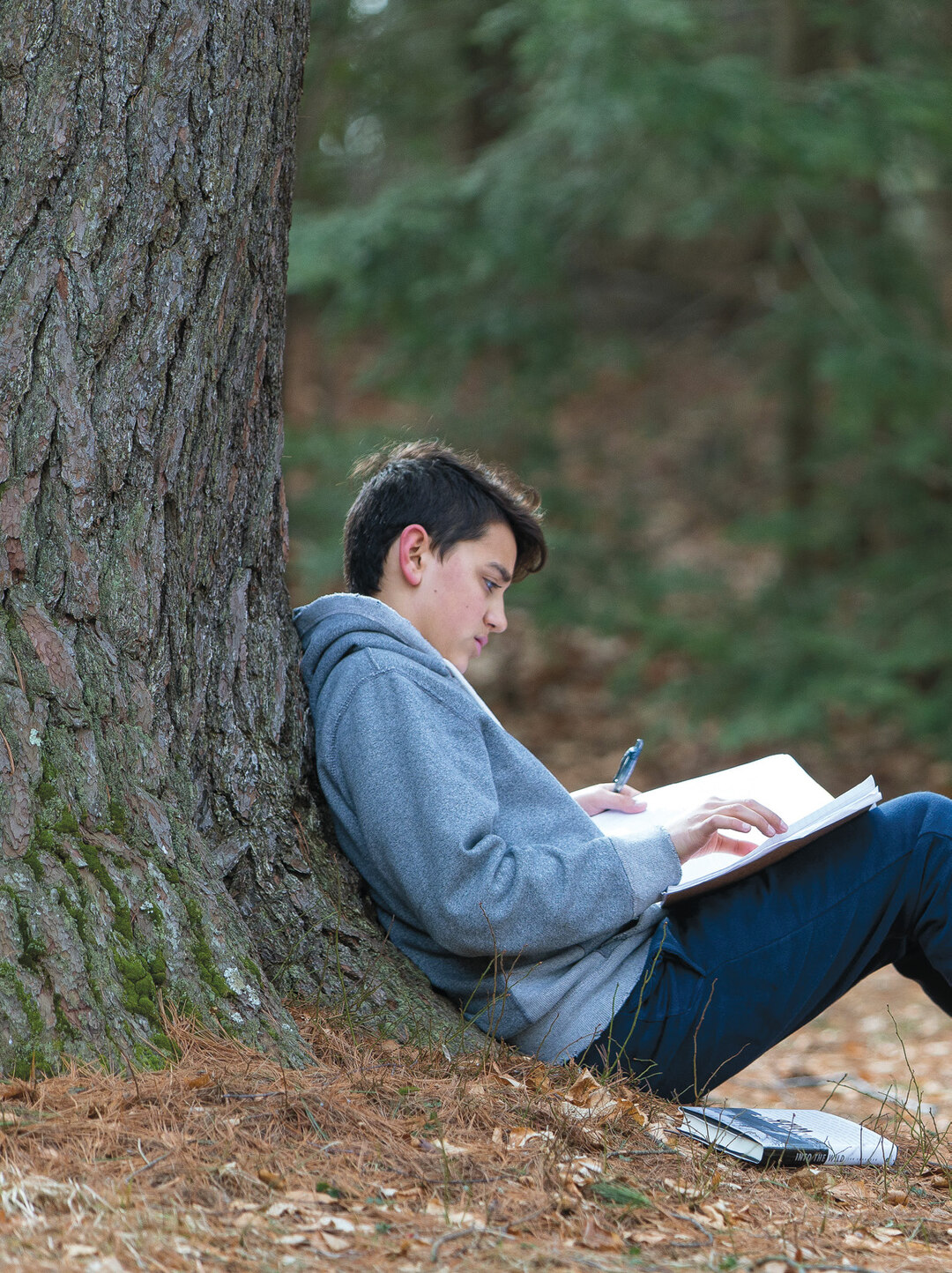