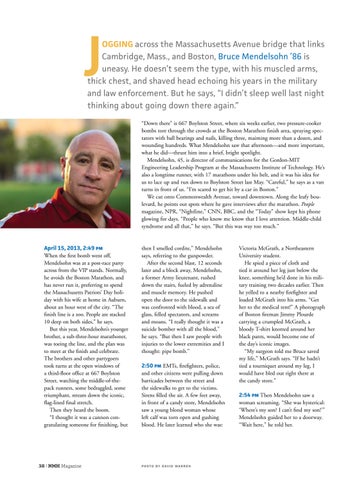 OGGING across the Massachusetts Avenue bridge that links Cambridge, Mass., and Boston, Bruce Mendelsohn ’86 is uneasy. He doesn’t seem the type, with his muscled arms, thick chest, and shaved head echoing his years in the military and law enforcement. But he says, “I didn’t sleep well last night thinking about going down there again.” “Down there” is 667 Boylston Street, where six weeks earlier, two pressure-cooker bombs tore through the crowds at the Boston Marathon finish area, spraying spectators with ball bearings and nails, killing three, maiming more than a dozen, and wounding hundreds. What Mendelsohn saw that afternoon—and more important, what he did—thrust him into a brief, bright spotlight. Mendelsohn, 45, is director of communications for the Gordon-MIT Engineering Leadership Program at the Massachusetts Institute of Technology. He’s also a longtime runner, with 17 marathons under his belt, and it was his idea for us to lace up and run down to Boylston Street last May. “Careful,” he says as a van turns in front of us. “I’m scared to get hit by a car in Boston.” We cut onto Commonwealth Avenue, toward downtown. Along the leafy boulevard, he points out spots where he gave interviews after the marathon. People magazine, NPR, “Nightline,” CNN, BBC, and the “Today” show kept his phone glowing for days. “People who know me know that I love attention. Middle-child syndrome and all that,” he says. “But this was way too much.”

April 15, 2013, 2:49 PM When the first bomb went off, Mendelsohn was at a post-race party across from the VIP stands. Normally, he avoids the Boston Marathon, and has never run it, preferring to spend the Massachusetts Patriots’ Day holiday with his wife at home in Auburn, about an hour west of the city. “The finish line is a zoo. People are stacked 10 deep on both sides,” he says. But this year, Mendelsohn’s younger brother, a sub-three-hour marathoner, was toeing the line, and the plan was to meet at the ﬁnish and celebrate. The brothers and other partygoers took turns at the open windows of a third-floor office at 667 Boylston Street, watching the middle-of-thepack runners, some bedraggled, some triumphant, stream down the iconic, flag-lined final stretch. Then they heard the boom. “I thought it was a cannon congratulating someone for finishing, but

then I smelled cordite,” Mendelsohn says, referring to the gunpowder. After the second blast, 12 seconds later and a block away, Mendelsohn, a former Army lieutenant, rushed down the stairs, fueled by adrenaline and muscle memory. He pushed open the door to the sidewalk and was confronted with blood, a sea of glass, felled spectators, and screams and moans. “I really thought it was a suicide bomber with all the blood,” he says. “But then I saw people with injuries to the lower extremities and I thought: pipe bomb.” 2:50 PM EMTs, firefighters, police, and other citizens were pulling down barricades between the street and the sidewalks to get to the victims. Sirens filled the air. A few feet away, in front of a candy store, Mendelsohn saw a young blond woman whose left calf was torn open and gushing blood. He later learned who she was:

Victoria McGrath, a Northeastern University student. He spied a piece of cloth and tied it around her leg just below the knee, something he’d done in his military training two decades earlier. Then he yelled to a nearby firefighter and loaded McGrath into his arms. “Get her to the medical tent!” A photograph of Boston fireman Jimmy Plourde carrying a crumpled McGrath, a bloody T-shirt knotted around her black pants, would become one of the day’s iconic images. “My surgeon told me Bruce saved my life,” McGrath says. “If he hadn’t tied a tourniquet around my leg, I would have bled out right there at the candy store.” 2:54 PM Then Mendelsohn saw a woman screaming. “She was hysterical: ‘Where’s my son? I can’t find my son!’” Mendelsohn guided her to a doorway. “Wait here,” he told her.