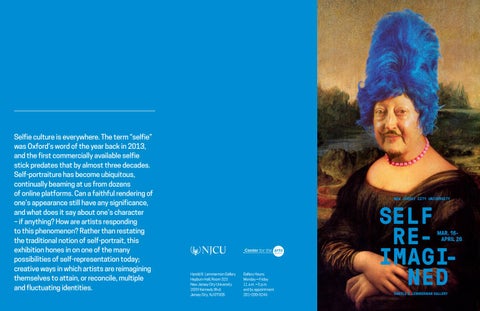 Selfie culture is everywhere. The term “selfie” was Oxford’s word of the year back in 2013, and the first commercially available selfie stick predates that by almost three decades. Self-portraiture has become ubiquitous, continually beaming at us from dozens of online platforms. Can a faithful rendering of one’s appearance still have any significance, and what does it say about one’s character – if anything? How are artists responding to this phenomenon? Rather than restating the traditional notion of self-portrait, this exhibition hones in on one of the many possibilities of self-representation today; creative ways in which artists are reimagining themselves to attain, or reconcile, multiple and fluctuating identities.

The idea of identities in flux was popularized within the post-structuralist critical discourse of the 1980s, represented by Judith Butler’s theory of gender performativity. Martha Wilson’s early works, such as Posturing Drag (1972), prefigured Butler’s theory, as well as Cindy Sherman’s photographic performances. By dressing up and making up as her “Others,” Wilson emphasized the fluidity of one’s identity. For her 1976 Self-Portrait performance, she asked people to write down their impressions of her on notecards and exhibited the documentation as her self-portrait. Wilson completely let go of control of her self-image and entrusted the audience to portray her in any way they pleased. Her recent work further complicates the assumed identity of the subject. In Mona/Marcel/Marge, she is Marcel Duchamp’s mustached version of Mona Lisa by Leonardo Da Vinci as well as Marge Simpson. Gender ambiguity of the original Mona Lisa is heightened by the mustache and goatee while the extremely high up ’do and parrot blue color make the subject comical.

The subject of the ceramist Hirotsune Tashima is also often himself. His ceramic sculpture, Desire, depicts his dream of winning in a motorcycle race as well as broadening his knowledge and expanding his horizons through traveling. Although the artist actually practices motorcycle racing, he is aware of how difficult it is to actually win. Since he has a college teaching job and a family to support in Tucson, Arizona, it is almost impossible to travel freely as well. Thus, this sculpture is his first step toward self-realization.

LAURA ALEXANDER Like Wilson, Laura Alexander dons Others’ disguises which are culturally diverse and takes photographs; turning them into oversized oil paintings. Inspired by Jersey City’s Indian neighborhood, Alexander depicted herself as the Hindu deities Kali and Ganesha: a fierce and protective female god and a half-elephant/half-human-male god. The latter becomes transgendered as the result of the artist not hiding her female body. In addition, the swastika on Ganesha’s hand has been replaced with the Starbucks’ logo. Alexander assimilates and mixes these cultural icons to address cultural hybridization as the result of globalization.

LISA FICARELLI-HALPERN #SelfPortraitwithTrappings by Lisa Ficarelli-Halpern, on the other hand, highlights contemporary cultural identity, which is often defined by the objects they own. The sitter (the artist herself) wears her curled hair in a Rococo-style, topped with a crown, while her body is literally trapped within long pearl necklaces and pricey gadgets such as a golden iPhone and Apple watch. This artist’s profile seems to suggest that, if Marie Antoinette lived today, she would be as obsessed with our ever-evolving technological accessories as with designer dresses.

NORIKO SHINOHARA Fantasy and narrative have driven Noriko Shinohara’s paintings about her half-imaginary self, Cutie, and her daily struggle to distinguish herself from her artist husband, Bullie. While the series is based on her autobiography of coming to the United States from Japan at a young age, and getting married to an eccentric, older artist, it is also a fairy tale of self-empowerment, in which Cutie often overcomes Bullie to get what she wants in her life. In reality, the couple’s relationship is more bitter than sweet, as they struggle to make ends meet. Noriko’s rarely exhibited pair of sculptures portrays herself, not only as her signature Cutie, but also as a Godzilla figure, to express her suppressed rage with comical humor.

FARSAD LABBAUF For the Iranian-American artist, Farsad Labbauf, his own image became the logical place to start an exploration of his identity and ideas related to Monistic belief systems. In order to express the concept of singularity or unity, Labbauf began sewing various found images and materials in the early 2000s. His 2011 Self-Portrait - #2 continues this pursuit and shows sewn threads connecting the separate parts of his body - photographed from slightly different angles and distances. In two other self-portraits by him in this exhibition, expressive lines fill up his body or head, as if seeking to reunite disembodied identities.

ZHANG HONGTU Zhang Hongtu’s Self-Portrait in the Style of Old Masters can also be considered an attempt to reconcile the artist’s split identities between East and West. Having grown up during the Cultural Revolution in China and migrated to the United States in 1982, Zhang spent an almost equal length of time in both native and adopted countries. To create this work, he used Photoshop for the first time, but only after numerous preparatory sketches. It required him to add layer upon layer, and took a long time to complete. Through such elaboration, Zhang paid homage to Leonardo Da Vinci and Pablo Picasso, both of whom he admires as “old masters.” The ancient Chinese folk song, “Yellow Ox Mountain,” quoted at the upper left corner narrates a story of a traveler finding himself still at the same mountain after three days of traveling. Like this traveler, Zhang found himself returning to painting after trying other mediums. Through varied mediums and styles, all eight artists in the exhibition invite the viewer to a self-exploratory journey to reflect on their own history, identity, and personal mythology. These visual realizations may lead to internal transformation, and deepen our understanding of both the world, and our place in it. Midori Yoshimoto NJCU Gallery Director/Associate Professor of Art History

KEVIN DARMANIE Similarly, Kevin Darmanie’s series of graphic-novel-style narrative paintings, Public Pool, features his alter ego, Kedar, in an imaginary island within Trinidad. Through this halffictitious self, Darmanie revisits his native country and reflects with nostalgia on the Rastafarian culture which used to be more vibrant and proud. Interacting with imaginary islanders, Kedar finds that the proud culture has long since declined and needs to be reinvigorated. Like Shinohara’s Cutie, Kedar holds a close physical resemblance to the artist, including the long dreadlocks, but he can travel and interact with strangers freely which is often not possible in real life. 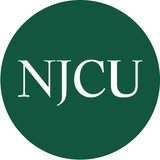 Selfie culture is everywhere. The term “selfie” was Oxford’s word of the year back in 2013, and the first commercially available selfie stic...

Selfie culture is everywhere. The term “selfie” was Oxford’s word of the year back in 2013, and the first commercially available selfie stic...