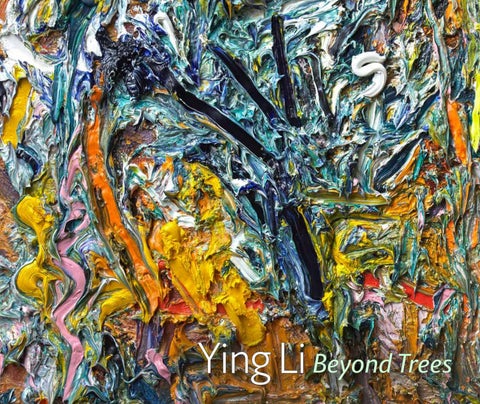 ing Li paints in a style that recalls simultaneously the exuberant clarity of northern Renaissance landscape (e.g., Vermeer), the rigorous explorations of post-impressionism (e.g., Cézanne), and the athletic energies of Abstract Expressionism (e.g., de Kooning). Such recollections are subtle, canny, and generous, but they are ultimately submerged into the blend

of urgency, inquiry, and playfulness that constitutes the distinctive signature of Ying’s art. Her landscapes speak both of their external subjects and of the active, emphatic process of creation: this is painting that is about both the world and the paint—its mode is at once mimetic and reflexive, its mood at once passionate and pensive. In oceanic greens

and sturdy strokes of blue-flicked black, she conveys the confident invitation and independent energies of a “leaf walk”; in ethereal pastels marked by suddenly insistent blue teardrops she evokes a “crying tree” holding its place against currents of natural and emotive energy; in gravity-defying patches of purple-tinged whites, dancing swirls of mellow blue, and brash patches of ochre, she brings to life the brazen dignity of a “wild orchid.” Layering paint onto the canvas in defiant mixtures of color, density, texture, shape, and directional force, Ying’s paintings engage the natural world’s multiplicities while evoking the seemingly endless possibilities of her own enterprise—and, perhaps above all, of her own participation in that dialogue of perception and performance. Indeed, among Ying’s central subjects (which she locates within, not beyond, the ever-evolving physical scene before her) is the act of painting itself and its capacity to enlarge the experience and significance of perception. The pressure of paint upon canvas, which highlights and violates pictorial two-dimensionality even as it extends pigment beyond the physical borders of the canvas frame, bespeaks a restless if also savvy relation to her medium. Each canvas becomes not simply a passively receptive surface for

transcribing observations but more dynamically a field of energy that pulsates, expands, recedes, and rekindles as lines, splats, masses, eddies, and swooshes of tactile hues contest and complement one another, forming networks that are coherent and cogent if never final. In turn, we are compelled to engage physically with these works, to participate in the drama of choices that lies at the heart of Ying’s compositional ethos. From afar, the paintings are undeniably representational; as we approach the canvas, an

odd and stimulating dissolution occurs: the edges of concrete objects come apart, and the landscape seethes with the interpenetration of elements. We move close to the canvas, to admire the sheer physicality of the paint—thick, rash, and decisive in its strokes. And then we back off slowly, watching the lost image reassert itself, testing the validity of our enduring hunger for signification. All the while, our perception is being transformed from unconscious instrument to awakened element of the painting’s ‘meaning.’ Ying is, then, an artist of tremendous visual impact, whose works demand to be read and re-read across a shifting distance. That ceaseless movement of our body and eye in relation to the picture brings awareness of viewing as a temporal act—aptly enough, as time is a fundamental concern of these paintings. The circuits of energy that charge the paint’s activity are traces of the painter’s embodied interaction with the scene’s ephemeral immediacy: the pigment’s movement and rhythm, in all their struggle and joy, provide a material allegory of Ying’s protean engagements with her environment and with her craft. Oscillating between reflective poise and immoderate frenzy, between reverent luminosity and glowing impatience, Ying’s paintings—seen in the

full arc from those delicately suggestive renderings of trees in dialogue with China’s sacred Mount Jiuhua to the glorious specimens of Haverford’s Arboretum—constitute a continuous meditation on the power and limits of duration. China, Haverford, paint, painting—these are all ecosystems in which Ying has lived, survived, and thrived, on differing terms for varying spans … just as her beloved trees constantly shift in their rootedness; just as her rigorously sumptuous works continuously surprise in their richly satisfying plenitude.

—Kim Benston President of Haverford College and Francis B. Gummere Professor of English

The Koshland Family contributions to Haverford College are immeasurable, but only when I actually met Kathy and Phlyssa did I realize what extraordinary people they are. Through meeting them I began to understand what the Haverford “spirit resonance” is truly about. The unique all-encompassing energy that has a deep and profound personal impact on all who visit, work, and study here. The first time I met Kathy was at our home at 2 College Lane, soon after I began teaching at Haverford. My husband Michael and I hosted a dinner for a few board members as a part of the faculty/board events, Kathy was one of our guests, along with the legendary John Whitehead. Over some homemade Chinese food and good wine, we talked about most everything— from the history of the college to world politics, from Paul Cézanne to how to start collecting artwork, from the impact of 9/11 to the imagination and beauty of the architecture and landscaping on our campus. Kathy is an exciting conversationalist. Her words flow seamlessly and spontaneously, from intimate knowledge of the Italian Renaissance to the very current moment of the contemporary art world, from studio practice to teaching art in a liberal arts college. Her vast knowledge is deep and her vision is clear. She is humorous and incredibly articulate. I feel the impact she makes on the people around her, and her warmth is penetrating. And, if I may add a small observational note: Cathy is one of the smartest and most elegant dressers I have ever known. It was through Kathy that I met Phlyssa Koshland, an enormously talented and original sculptor. Phlyssa’s sculptures are

so uplifting and alive that while marveling at their physical weight and size—many of them are bronze and they are huge—they can simultaneously make a viewer’s spirits fly. We first met at the Museum of Modern Art in New York; and then a second time again, at MOMA, naturally. Where else would two artists meet? Walking through the many galleries of paintings and sculptures with Phlyssa was an inspiring experience. But some of the most memorable moments occurred while we strolled in the Architecture and Design galleries. I still can hear her calm and assured voice describing the pieces on display—the combination of crispy lines and semi-transparent shapes of a hanging light; the graceful contours of a chair made of paper; the surprising and bold colors in a set of Kitchenware… I started to see and feel these daily objects in a totally new way, through the eyes and imagination of a brilliant sculptor. While looking through the shows we reflected on the importance of recognizing the character of different materials and how to use them in unexpected ways (she is a master of that!), about the routines and disciplines of studio practice, travels, inspirations, the process of making art. I mentioned that I was having a difficult time finding drawing pens that could make bold and smooth lines. Soon after that visit, I received a package from Paris that contained a set of beautiful pens from Phlyssa. They made the kind of lines I wanted! I carried them wherever I went. The pens have been long used, the drawings I made with them stayed. —Ying Li Phlyssa Koshland Professor in Fine Arts Haverford College An exhibition on view April 22-28, 2019 at VCAM, Haverford College, in commemoration of Ying Li's appointment as Phlyssa Koshland Professor...

An exhibition on view April 22-28, 2019 at VCAM, Haverford College, in commemoration of Ying Li's appointment as Phlyssa Koshland Professor...