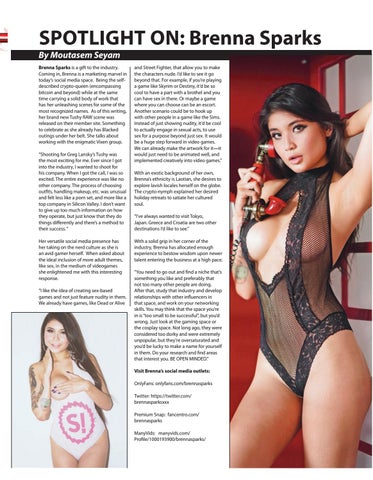 Brenna Sparks is a gift to the industry. Coming in, Brenna is a marketing marvel in today’s social media space. Being the selfdescribed crypto-queen (encompassing bitcoin and beyond) while at the same time carrying a solid body of work that has her unleashing scenes for some of the most recognized names. As of this writing, her brand new Tushy RAW scene was released on their member site. Something to celebrate as she already has Blacked outings under her belt. She talks about working with the enigmatic Vixen group. “Shooting for Greg Lansky’s Tushy was the most exciting for me. Ever since I got into the industry, I wanted to shoot for his company. When I got the call, I was so excited. The entire experience was like no other company. The process of choosing outfits, handling makeup, etc. was unusual and felt less like a porn set, and more like a top company in Silicon Valley. I don’t want to give up too much information on how they operate, but just know that they do things differently and there’s a method to their success. “ Her versatile social media presence has her taking on the nerd culture as she is an avid gamer herself. When asked about the ideal inclusion of more adult themes, like sex, in the medium of videogames she enlightened me with this interesting response. “I like the idea of creating sex-based games and not just feature nudity in them. We already have games, like Dead or Alive

and Street Fighter, that allow you to make the characters nude. I’d like to see it go beyond that. For example, if you’re playing a game like Skyrim or Destiny, it’d be so cool to have a part with a brothel and you can have sex in there. Or maybe a game where you can choose can be an escort. Another scenario could be to hook up with other people in a game like the Sims. Instead of just showing nudity, it’d be cool to actually engage in sexual acts, to use sex for a purpose beyond just sex. It would be a huge step forward in video games. We can already make the artwork for it—it would just need to be animated well, and implemented creatively into video games.” With an exotic background of her own, Brenna’s ethnicity is Laotian, she desires to explore lavish locales herself on the globe. The crypto-nymph explained her desired holiday retreats to satiate her cultured soul. “I’ve always wanted to visit Tokyo, Japan. Greece and Croatia are two other destinations I’d like to see.” With a solid grip in her corner of the industry, Brenna has allocated enough experience to bestow wisdom upon newer talent entering the business at a high pace. “You need to go out and find a niche that’s something you like and preferably that not too many other people are doing. After that, study that industry and develop relationships with other influencers in that space, and work on your networking skills. You may think that the space you’re in is “too small to be successful”, but you’d wrong. Just look at the gaming space or the cosplay space. Not long ago, they were considered too dorky and were extremely unpopular, but they’re oversaturated and you’d be lucky to make a name for yourself in them. Do your research and find areas that interest you. BE OPEN MINDED.” Visit Brenna’s social media outlets: OnlyFans: onlyfans.com/brennasparks Twitter: https://twitter.com/ brennasparksxxx Premium Snap: fancentro.com/ brennasparks ManyVids: manyvids.com/ Profile/1000193900/brennasparks/ 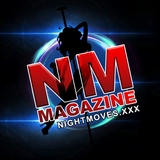