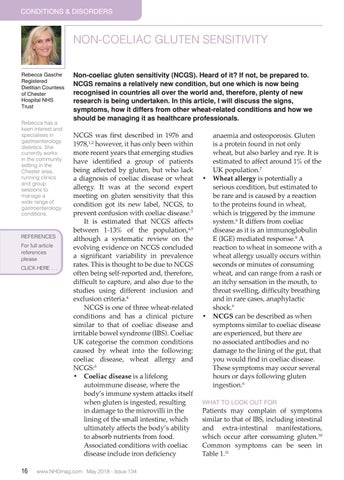 Non-coeliac gluten sensitivity (NCGS). Heard of it? If not, be prepared to. NCGS remains a relatively new condition, but one which is now being recognised in countries all over the world and, therefore, plenty of new research is being undertaken. In this article, I will discuss the signs, symptoms, how it differs from other wheat-related conditions and how we should be managing it as healthcare professionals. NCGS was first described in 1976 and 1978,1,2 however, it has only been within more recent years that emerging studies have identified a group of patients being affected by gluten, but who lack a diagnosis of coeliac disease or wheat allergy. It was at the second expert meeting on gluten sensitivity that this condition got its new label, NCGS, to prevent confusion with coeliac disease.3 It is estimated that NCGS affects between 1-13% of the population,4,5 although a systematic review on the evolving evidence on NCGS concluded a significant variability in prevalence rates. This is thought to be due to NCGS often being self-reported and, therefore, difficult to capture, and also due to the studies using different inclusion and exclusion criteria.4 NCGS is one of three wheat-related conditions and has a clinical picture similar to that of coeliac disease and irritable bowel syndrome (IBS). Coeliac UK categorise the common conditions caused by wheat into the following: coeliac disease, wheat allergy and NCGS:6 • Coeliac disease is a lifelong autoimmune disease, where the body’s immune system attacks itself when gluten is ingested, resulting in damage to the microvilli in the lining of the small intestine, which ultimately affects the body’s ability to absorb nutrients from food. Associated conditions with coeliac disease include iron deficiency

anaemia and osteoporosis. Gluten is a protein found in not only wheat, but also barley and rye. It is estimated to affect around 1% of the UK population.7 • Wheat allergy is potentially a serious condition, but estimated to be rare and is caused by a reaction to the proteins found in wheat, which is triggered by the immune system.6 It differs from coeliac disease as it is an immunoglobulin E (IGE) mediated response.8 A reaction to wheat in someone with a wheat allergy usually occurs within seconds or minutes of consuming wheat, and can range from a rash or an itchy sensation in the mouth, to throat swelling, difficulty breathing and in rare cases, anaphylactic shock.9 • NCGS can be described as when symptoms similar to coeliac disease are experienced, but there are no associated antibodies and no damage to the lining of the gut, that you would find in coeliac disease. These symptoms may occur several hours or days following gluten ingestion.6 WHAT TO LOOK OUT FOR

Patients may complain of symptoms similar to that of IBS, including intestinal and extra-intestinal manifestations, which occur after consuming gluten.10 Common symptoms can be seen in Table 1.11

Lack of well being

Numbness in arms and legs

There are currently no guidelines on the diagnosis of NCGS, but reviews generally conclude that a diagnosis can be considered when there is a clear link between gluten and symptoms, but coeliac disease serology is negative and no villous atrophy is seen,12,13 essentially ruling out coeliac disease. The current NICE guidance advises that the gold standard for diagnosing coeliac disease is to test for total immunoglobulin A (IgA) and IgA tissue transglutaminase (tTG) as the first choice. IgA endomysial antibodies (EMA) may be used if IgA tTG is weakly positive, and immunoglobulin G (IgG) EMA, IgG deamidated gliadin peptide (DGP) or IgG tTG if may be considered if IgA is deficient. HLA DQ2/DQ8 testing should only be considered in the diagnosis of coeliac disease in specialist settings (for example, in children who are not having a biopsy, or in people who already have limited gluten ingestion and choose not to have a gluten challenge). If serology results are positive, the patient should be referred to a gastroenterologist specialist for an endoscopy and duodenal biopsy (to assess if there is damage to the microvilli), to confirm or exclude coeliac disease. Throughout the serology testing and biopsy, the patient must be on a gluten containing diet of 10g gluten/day for six weeks to provide true results.14 A wheat allergy may be excluded by a skin prick test and an IgE antibody test.15 Therefore, these tests should be completed before reaching a conclusion of NCGS. There is ongoing research into other potential diagnostic criteria for NCGS, with

some suggesting that an IgG anti-gliadin (IgG AGA) test may be of use, as IgG AGAs may be seen more frequently in NCGS.16 However, further research is needed before this can be recommended as a diagnostic feature of NCGS, as IgG AGAs may also be present in some patients with coeliac disease, as well as a small number of the healthy population.15 Once coeliac disease and wheat allergy have been ruled out, a further method to confirm a diagnosis of NCGS would be to follow a glutenfree diet, followed by a reintroduction of gluten. If symptoms improve on a gluten-free diet, and return when gluten is reintroduced, NCGS can be assumed.15 THE LOW FODMAP DIET

The treatment, or better said, management of symptoms for NCGS is to avoid gluten. But, how strictly this needs to be followed is yet to be confirmed. As NCGS differs from coeliac disease in the fact there is no autoimmune response and, therefore, no damage done to the small intestine, it is not as essential for patients to follow such a strict gluten-free diet. Studies have also shown that a small amount of gluten may be tolerated by patients with NCGS,17 and it may be possible for patients to reintroduce small amounts of gluten into their diets after following a glutenfree diet for one to two years. However, this tolerance is thought to be individual.18 As well as the more obvious gluten-free diet, there are other diets which may warrant consideration in the management of NCGS. With the symptoms of NCGS and IBS being so similar, www.NHDmag.com May 2018 - Issue 134

NCGS remains a new and upcoming condition, which definitely requires further research in the areas of its prevalence, how it could be diagnosed and how it is best managed. some studies have discussed the use of the low FODMAP (fermentable, oligo-saccharides, disaccharides, monosaccharides and polyols) diet being an alternative treatment for NCGS. FODMAPs are poorly absorbed carbohydrates, which can cause the symptoms of bloating, abdominal discomfort and an altered bowel habit in patients with IBS. A study by Biesiekierski et al reported that NCGS patients’ symptoms improved with the addition of a low FODMAP diet, rather than with a gluten-free diet alone.19 This is thought to be due to the fact the non-gluten components of wheat (fructans - a FODMAP) are known to induce symptoms in patients with IBS20 and, therefore, links to other high FODMAP foods may be seen in patients with NCGS. NCGS has also been linked to IBS, particularly diarrhoea prominent IBS, and may be termed as gluten-sensitive irritable bowel syndrome.21 Recent evidence has shown significant improvement in GI symptoms and tiredness levels during a low FODMAP diet and saw no effect of gluten in inducing change in any symptom in either a seven-day gluten challenge or a three-day rechallenge. These results highlight the likely impact that reducing FODMAPs and other dietary triggers may have in the NCGS patient group.19 However, further research and the need for more comparative studies on a gluten-free diet and a low FODMAP diet in NCGS patients is required, to continue guiding this therapeutic approach.22 THE ROLE OF THE HEALTHCARE PROFESSIONAL

The main role for healthcare professionals is to ensure that patients have first been screened for coeliac disease, as studies have shown that two in three patients with self-perceived NCGS did not have coeliac disease adequately excluded.23 This can in turn increase a patients’ risk of misdiagnosis and lead to inadequate management and screening of the associated 18

complications of coeliac disease, if it is left untreated. In addition to this, healthcare professionals are important in guiding patients through their dietary modifications. As mentioned, this could be a complete gluten-free diet, a gluten challenge diet, or perhaps a low FODMAP diet. Reasons for this include the fact that a gluten-free diet can be markedly restrictive and, if not followed correctly, can be nutritionally inadequate - especially in fibre and B vitamins.24 Further studies have shown that at least 45% of patients with self-perceived NCGS who initiate a gluten-free diet have not undergone dietetic education to ensure nutritional adequacy,25 highlighting a further need for education provided by healthcare professionals. CONCLUSION

NCGS remains a new and upcoming condition, which definitely requires further research in the areas of its prevalence, how it could be diagnosed and how it is best managed. The current evidence concludes that the imperative role for healthcare professionals in the management of NCGS is firstly to ensure a correct diagnosis is made by ruling out coeliac disease and wheat allergy. This helps to ensure the correct dietary advice and follow up is provided to prevent potential longterm complications in coeliac disease. Healthcare professionals can also provide the correct diet suited to the patient, to ensure symptoms are well controlled without compromising the nutritional adequacy of the diet. The general consensus on treating NCGS is to follow a gluten-free diet; however, emerging evidence is questioning if this needs to be completely gluten-free or low gluten and includes the role of the low FODMAP diet in NCGS. Plenty more to learn, but I’m sure we’ll be hearing much more on NCGS in the future, with the hope of developing more structured pathways for the diagnosis and management of this condition. 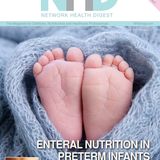