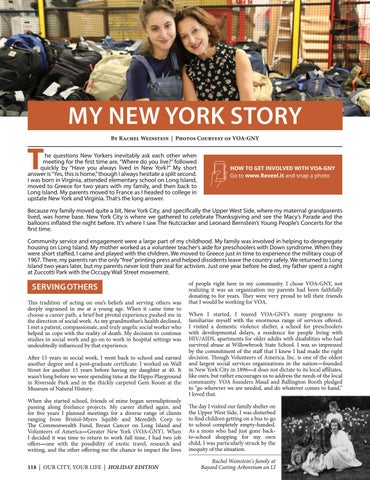 he questions New Yorkers inevitably ask each other when meeting for the first time are, “Where do you live?” followed quickly by “Have you always lived in New York?” My short answer is “Yes, this is home,” though I always hesitate a split second. I was born in Virginia, attended elementary school on Long Island, moved to Greece for two years with my family, and then back to Long Island. My parents moved to France as I headed to college in upstate New York and Virginia. That’s the long answer.

HOW TO GET INVOLVED WITH VOA-GNY Go to www.Reveel.it and snap a photo

Because my family moved quite a bit, New York City, and specifically the Upper West Side, where my maternal grandparents lived, was home base. New York City is where we gathered to celebrate Thanksgiving and see the Macy’s Parade and the balloons inflated the night before. It’s where I saw The Nutcracker and Leonard Bernstein’s Young People’s Concerts for the first time. Community service and engagement were a large part of my childhood. My family was involved in helping to desegregate housing on Long Island. My mother worked as a volunteer teacher’s aide for preschoolers with Down syndrome. When they were short staffed, I came and played with the children. We moved to Greece just in time to experience the military coup of 1967. There, my parents ran the only “free” printing press and helped dissidents leave the country safely. We returned to Long Island two years later, but my parents never lost their zeal for activism. Just one year before he died, my father spent a night at Zuccotti Park with the Occupy Wall Street movement.

SERVING OTHERS This tradition of acting on one’s beliefs and serving others was deeply ingrained in me at a young age. When it came time to choose a career path, a brief but pivotal experience pushed me in the direction of social work. As my grandmother’s health declined, I met a patient, compassionate, and truly angelic social worker who helped us cope with the reality of death. My decision to continue studies in social work and go on to work in hospital settings was undoubtedly influenced by that experience. After 15 years in social work, I went back to school and earned another degree and a post-graduate certificate. I worked on Wall Street for another 15 years before having my daughter at 40. It wasn’t long before we were spending time at the Hippo Playground in Riverside Park and in the thickly carpeted Gem Room at the Museum of Natural History. When she started school, friends of mine began serendipitously passing along freelance projects. My career shifted again, and for five years I planned meetings for a diverse range of clients ranging from Bristol-Myers Squibb and Meredith Corp to The Commonwealth Fund, Breast Cancer on Long Island and Volunteers of America—Greater New York (VOA-GNY). When I decided it was time to return to work full time, I had two job offers—one with the possibility of exotic travel, research and writing, and the other offering me the chance to impact the lives 118 | OUR CITY, YOUR LIFE | HOLIDAY EDITION

of people right here in my community. I chose VOA-GNY, not realizing it was an organization my parents had been faithfully donating to for years. They were very proud to tell their friends that I would be working for VOA. When I started, I toured VOA-GNY’s many programs to familiarize myself with the enormous range of services offered. I visited a domestic violence shelter, a school for preschoolers with developmental delays, a residence for people living with HIV/AIDS, apartments for older adults with disabilities who had survived abuse at Willowbrook State School. I was so impressed by the commitment of the staff that I knew I had made the right decision. Though Volunteers of America, Inc. is one of the oldest and largest social services organizations in the nation—founded in New York City in 1896—it does not dictate to its local affiliates, like ours, but rather encourages us to address the needs of the local community. VOA founders Maud and Ballington Booth pledged to “go wherever we are needed, and do whatever comes to hand.” I loved that. The day I visited our family shelter on the Upper West Side, I was disturbed to find children getting on a bus to go to school completely empty-handed. As a mom who had just gone backto-school shopping for my own child, I was particularly struck by the inequity of the situation. Rachel Weinstein's family at Bayard Cutting Arboretum on LI