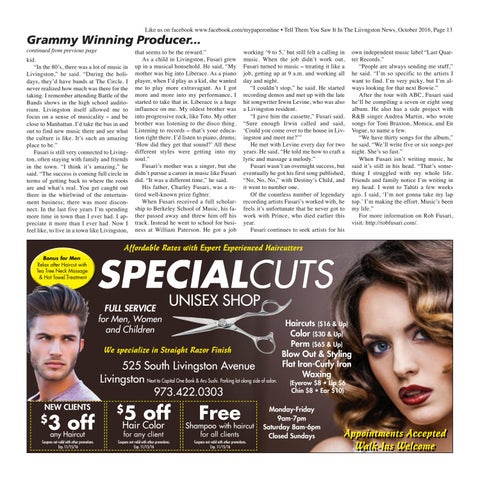 kid. “In the 80’s, there was a lot of music in Livingston,” he said. “During the holidays, they’d have bands at The Circle. I never realized how much was there for the taking. I remember attending Battle of the Bands shows in the high school auditorium. Livingston itself allowed me to focus on a sense of musicality – and be close to Manhattan. I’d take the bus in and out to find new music there and see what the culture is like. It’s such an amazing place to be.” Fusari is still very connected to Livington, often staying with family and friends in the town. “I think it’s amazing,” he said. “The success is coming full circle in terms of getting back to where the roots are and what’s real. You get caught out there in the whirlwind of the entertainment business; there was more disconnect. In the last five years I’m spending more time in town than I ever had. I appreciate it more than I ever had. Now I feel like, to live in a town like Livingston,

that seems to be the reward.” As a child in Livingston, Fusari grew up in a musical household. He said, “My mother was big into Liberace. As a piano player, when I’d play as a kid, she wanted me to play more extravagant. As I got more and more into my performance, I started to take that in. Liberace is a huge influence on me. My oldest brother was into progressive rock, like Toto. My other brother was listening to the disco thing. Listening to records – that’s your education right there. I’d listen to piano, drums; ‘How did they get that sound?’ All these different styles were getting into my soul.” Fusari’s mother was a singer, but she didn’t pursue a career in music like Fusari did. “It was a different time,” he said. His father, Charley Fusari, was a retired well-known prize fighter. When Fusari received a full scholarship to Berkeley School of Music, his father passed away and threw him off his track. Instead he went to school for business at William Paterson. He got a job

working ‘9 to 5,’ but still felt a calling in music. When the job didn’t work out, Fusari turned to music – treating it like a job, getting up at 9 a.m. and working all day and night. “I couldn’t stop,” he said. He started recording demos and met up with the late hit songwriter Irwin Levine, who was also a Livingston resident. “I gave him the cassette,” Fusari said. “Sure enough Irwin called and said, ‘Could you come over to the house in Livingston and meet me?’” He met with Levine every day for two years. He said, “He told me how to craft a lyric and massage a melody.” Fusari wasn’t an overnight success, but eventually he got his first song published, “No, No, No,” with Destiny’s Child, and it went to number one. Of the countless number of legendary recording artists Fusari’s worked with, he feels it’s unfortunate that he never got to work with Prince, who died earlier this year. Fusari continues to seek artists for his

own independent music label “Last Quarter Records.” “People are always sending me stuff,” he said. “I’m so specific to the artists I want to find. I’m very picky, but I’m always looking for that next Bowie.” After the tour with ABC, Fusari said he’ll be compiling a seven or eight song album. He also has a side project with R&amp;B singer Andrea Martin, who wrote songs for Toni Braxton, Monica, and En Vogue, to name a few. “We have thirty songs for the album,” he said. “We’ll write five or six songs per night. She’s so fast.” When Fusari isn’t writing music, he said it’s still in his head. “That’s something I struggled with my whole life. Friends and family notice I’m writing in my head. I went to Tahiti a few weeks ago. I said, ‘I’m not gonna take my lap top.’ I’m making the effort. Music’s been my life.” For more information on Rob Fusari, visit: http://robfusari.com/.