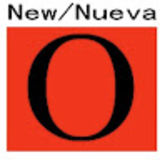 Contributions and Challenges of the Latinx Community in Kalamazoo series

Editor's note: This story is part of New/Nueva Opinión's Contributions and Challenges of the Latinx Community in the Kalamazoo series. The Kalamazoo Community Foundation funds it.

Kalamazoo, MI – The LGBT (lesbian, gay, bisexual and transgender) community in Michigan has, for the most part, enjoyed a significant improvement in their living standards over the past 15 years. With the Obergefell v. Hodges decision in 2015, same-sex couples are now allowed to marry and afforded all the same rights as heterosexual couples are, most of Michigan’s major cities provide protections against housing and employment discrimination for LGBT people, and transgender individuals are allowed change their gender markers on birth certificates and drivers’ licenses.

Nevertheless, significant challenges remain, particularly outside of the legal sphere, as many LGBT individuals struggle to be accepted by their families and even their communities. Problems of acceptance are especially evident in the Latinx LGBT community in the state, who often have to face the struggles of both communities at the same time. In the Latinx community, they find themselves ostracized and their identities a taboo, while in the LGBT community they find themselves underrepresented in organizations geared primarily towards white community members. Despite these struggles, several LGBT Latinx people have struggled to make their voices heard and their issues known, defying systemic bias and cultural taboos alike to be who they are.

Growing up Hispanic in the Southwest Michigan area, Carla Fernandez found herself surrounded by the Catholic Church and its influence on the community. As she tells it, “Everything was about, ‘marriage is between a man and a woman. The family [had] to be preserved.” In this environment, there was often a significant amount of hostility towards the idea of LGBT and queer individuals, as many community members “[took] the church’s word as law”. As a result, Fernandez felt like she couldn’t discuss her identity openly with her family, until much later. Eventually, she was able to come out as bisexual to her parents—and fortunately, they accepted her for the most part.

Her extended family, on the other hand, was much more difficult to convince. “[Being bisexual] caused rifts between family members and my extended family,” she says. Their adherence to church doctrine, which has only recently begun to change under the comparatively gay-friendly Pope Francis, meant many of them rejected her sexuality. As a result of this, she cites family acceptance as an important step in increasing visibility and acceptance of LGBT Latinx people. “Rejection can lead to homelessness or suicide,” she explains. “People need to think about the implications of their actions.” By accepting their LGBT family members when they come out as who they are, Latinx families can make sure that they stay safe and feel welcome, rather than ostracized and unable to turn to anyone they know.

Fellow LGBT community member Frances shares similar experiences with the Latinx community in Southwest Michigan. Frances, a queer, gender non-conforming (GNC) Black Latinx person, grew up in New York City, where she was exposed to a variety of different cultures and sub-cultures, including LGBT people. While she did feel like she had to hide her identity from her family, she eventually came out to them after finding out her brother was gay, and seeing how he was received by her family members. After moving to Kalamazoo two years ago, she found that her identity was often not accepted by the local Latinx community, and in many cases she felt like she had to hide her identity when working at Latinx-owned businesses to avoid being alienated or fired.

Nevertheless, Frances found ways to speak about her identity and find members of the community who shared her background. After meeting other members of the community who were non-heterosexual or cisgendered, she was able to discuss her own LGBT identity much more comfortably. At a recent meeting of the Battle Creek Coalition for Truth, Racial Healing & Transformation (TRHT), she was able to meet with many members of the Latinx community of Southwest Michigan, both LGBT and non-LGBT, and discuss her own experiences as a queer person in the community. Although many of them were “taken aback”, as she describes it, they nevertheless asked questions out of curiosity and respect for her, rather than making judgements on who she was or who she loved. As a result, she says, “it was easier [for her] to just speak openly with them”, giving her and other community members alike the chance to interact more openly about LGBT identity.

In the opinions of both Frances and Fernandez, the stigma within the community owes its existence not just to the influence of the church, but to lack of experience with LGBT individuals and a “fear of the unknown”, as Frances puts it, that leads many people to make incorrect assumptions about LGBT community members. In many cases, use of slurs and so-called “micro-aggressions” such as assumptions about LGBT persons’ lives are unintentional, originating more out of ignorance or unfamiliarity than any deliberate malice on the part of cis, heterosexual community members. On the other hand, as Fernandez explains, many people do deliberately choose to be homophobic or transphobic to their LGBT brethren, usually due to the aforementioned reasons. Although the attitudes of many Latinx are changing, especially as the church starts to open up to same-sex attracted individuals, significant challenges remain, and Fernandez still frequently finds herself witness to prejudice in the community. “Young people used to say things like ‘Oh, that’s so gay’ or throw the word ‘fag’ around,” she tells us. After asking them to think critically about why they were using that language, she found many of them did not have a good answer for why they used it. “No one had ever stopped to question them.”

In Fernandez and Frances’ opinions, the taboo around LGBT identity in Latinx spaces, while difficult to resolve, is absolutely solvable. Fernandez especially emphasizes the need for representation in mainstream media, as it helps educate Latinx individuals and consequently reduce the stigma around LGBT topics. “Even LGBT news anchors can help positively raise the profile of the community,” she says. Frances, for her part, believes that more openness on the part of the Latinx community towards outside perspectives and finding “common humanity” with LGBT people of Latinx and non-Latinx backgrounds alike will help to resolve the stigma. “We are all more the same than we are different”, she says.

Juan Martin Velez is a student of Cultural Studies, U3, at McGill University, Montreal, Quebec, Canada, is an intern at New/New Opinion, and is a resident of Kalamazoo County.

If you know of a story about the Kalamazoo area Latinx community that you think should be told or have a suggestion for a topic to be covered in this series, please email newopinionnews@ newopinion.net. or call 269.425.6728. 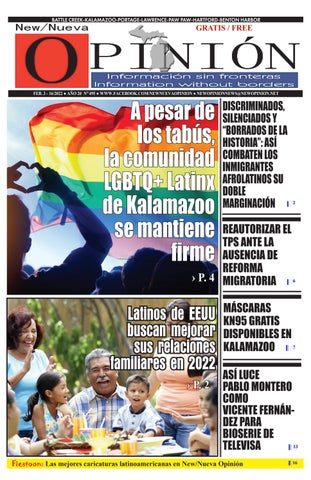