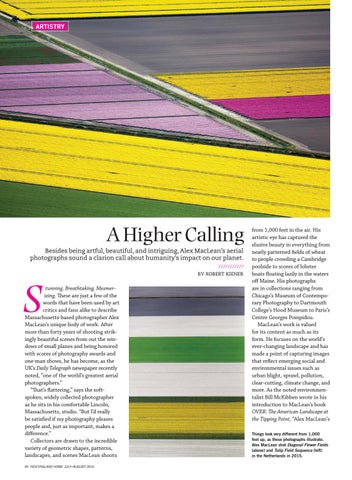 A Higher Calling Besides being artful, beautiful, and intriguing, Alex MacLean’s aerial photographs sound a clarion call about humanity’s impact on our planet. ///////////

tunning. Breathtaking. Mesmerizing. These are just a few of the words that have been used by art critics and fans alike to describe Massachusetts-based photographer Alex MacLean’s unique body of work. After more than forty years of shooting strikingly beautiful scenes from out the windows of small planes and being honored with scores of photography awards and one-man shows, he has become, as the UK’s Daily Telegraph newspaper recently noted, “one of the world’s greatest aerial photographers.” “That’s flattering,” says the softspoken, widely collected photographer as he sits in his comfortable Lincoln, Massachusetts, studio. “But I’d really be satisfied if my photography pleases people and, just as important, makes a difference.” Collectors are drawn to the incredible variety of geometric shapes, patterns, landscapes, and scenes MacLean shoots

from 1,000 feet in the air. His artistic eye has captured the elusive beauty in everything from neatly patterned fields of wheat to people crowding a Cambridge poolside to scores of lobster boats floating lazily in the waters off Maine. His photographs are in collections ranging from Chicago’s Museum of Contemporary Photography to Dartmouth College’s Hood Museum to Paris’s Centre Georges Pompidou. MacLean’s work is valued for its content as much as its form. He focuses on the world’s ever-changing landscape and has made a point of capturing images that reflect emerging social and environmental issues such as urban blight, sprawl, pollution, clear-cutting, climate change, and more. As the noted environmentalist Bill McKibben wrote in his introduction to MacLean’s book OVER: The American Landscape at the Tipping Point, “Alex MacLean’s Things look very different from 1,000 feet up, as these photographs illustrate. Alex MacLean shot Diagonal Flower Fields (above) and Tulip Field Sequence (left) in the Netherlands in 2015.