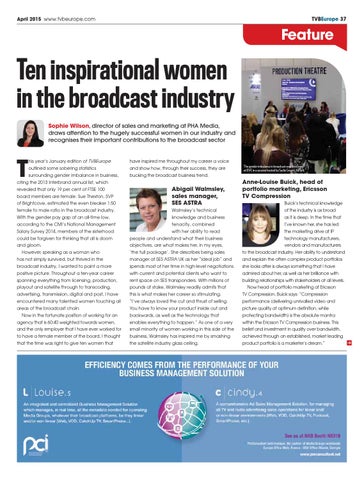 Ten inspirational women in the broadcast industry Sophie Wilson, director of sales and marketing at PHA Media, draws attention to the hugely successful women in our industry and recognises their important contributions to the broadcast sector

his year’s January edition of TVBEurope

have inspired me throughout my career a voice

and show how, through their success, they are

The gender imbalance in broadcast was discussed at BVE in a session hosted by Sadie Groom, far left

of Brightcove, estimated the even bleaker 1:50

female to male ratio in the broadcast industry.

of the industry is as broad

With the gender pay gap at an all-time low,

as it is deep. In the time that

according to the CMI’s National Management

I’ve known her, she has led

Salary Survey 2014, members of the sisterhood

with her ability to read

the marketing drive at IP

revealed that only 19 per cent of FTSE 100 board members are female. Sue Thexton, SVP

could be forgiven for thinking that all is doom

people and understand what their business

objectives, are what makes her, in my eyes,

‘the full package’. She describes being sales

to the broadcast industry. Her ability to understand

has not simply survived, but thrived in the

manager at SES ASTRA UK as her “ideal job” and

broadcast industry, I wanted to paint a more

spends most of her time in high-level negotiations

she looks after is always something that I have

positive picture. Throughout a ten-year career

with current and potential clients who want to

admired about her, as well as her brilliance with

spanning everything from licensing, production,

rent space on SES transponders. With millions of

building relationships with stakeholders at all levels.

playout and satellite through to transcoding,

this is what makes her career so stimulating.

encountered many talented women touching all

“I’ve always loved the cut and thrust of selling.

areas of the broadcast chain.

You have to know your product inside out and

picture quality at optimum deﬁnition, while

backwards, as well as the technology that

protecting bandwidth) is the absolute mantra

agency that is 60:40 weighted towards women,

enables everything to happen.” As one of a very

within the Ericsson TV Compression business. This

and the only employer that I have ever worked for

small minority of women working in this side of the

belief and investment in quality over bandwidth,

to have a female member of the board, I thought

business, Walmsley has inspired me by smashing

achieved through an established, market leading

that the time was right to give ten women that

product portfolio is a marketer’s dream.”

However, speaking as a woman who

Now in the fortunate position of working for an