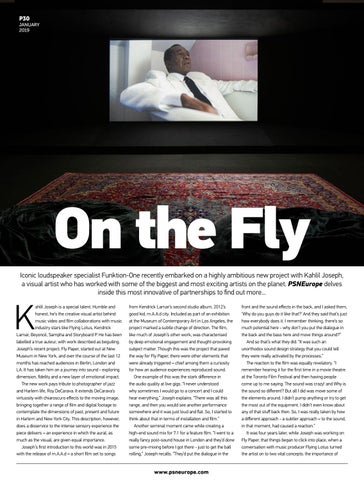 On the Fly Iconic loudspeaker specialist Funktion-One recently embarked on a highly ambitious new project with Kahlil Joseph, a visual artist who has worked with some of the biggest and most exciting artists on the planet. PSNEurope delves inside this most innovative of partnerships to find out more...

ahlil Joseph is a special talent. Humble and honest, he’s the creative visual artist behind music video and film collaborations with music industry stars like Flying Lotus, Kendrick Lamar, Beyoncé, Sampha and Storyboard P. He has been labelled a true auteur, with work described as beguiling. Joseph’s recent project, Fly Paper, started out at New Museum in New York, and over the course of the last 12 months has reached audiences in Berlin, London and LA. It has taken him on a journey into sound - exploring dimension, fidelity and a new layer of emotional impact. The new work pays tribute to photographer of jazz and Harlem life, Roy DeCarava. It extends DeCarava’s virtuosity with chiaroscuro effects to the moving image, bringing together a range of film and digital footage to contemplate the dimensions of past, present and future in Harlem and New York City. This description, however, does a disservice to the intense sensory experience the piece delivers – an experience in which the aural, as much as the visual, are given equal importance. Joseph’s first introduction to this world was in 2015 with the release of m.A.A.d – a short film set to songs

from Kendrick Lamar’s second studio album, 2012’s good kid, m.A.A.d city. Included as part of an exhibition at the Museum of Contemporary Art in Los Angeles, the project marked a subtle change of direction. The film, like much of Joseph’s other work, was characterised by deep emotional engagement and thought-provoking subject matter. Though this was the project that paved the way for Fly Paper, there were other elements that were already triggered – chief among them a curiosity for how an audience experiences reproduced sound. One example of this was the stark difference in the audio quality at live gigs. “I never understood why sometimes I would go to a concert and I could hear everything,” Joseph explains. “There was all this range, and then you would see another performance somewhere and it was just loud and flat. So, I started to think about that in terms of installation and film.” Another seminal moment came while creating a high-end sound mix for 7.1 for a feature film. “I went to a really fancy post-sound house in London and they’d done some pre-mixing before I got there - just to get the ball rolling,” Joseph recalls. “They’d put the dialogue in the

front and the sound effects in the back, and I asked them, ‘Why do you guys do it like that?’ And they said that’s just how everybody does it. I remember thinking, there’s so much potential here - why don’t you put the dialogue in the back and the bass here and move things around?” And so that’s what they did. “It was such an unorthodox sound design strategy that you could tell they were really activated by the processes.” The reaction to the film was equally revelatory. “I remember hearing it for the first time in a movie theatre at the Toronto Film Festival and then having people come up to me saying: The sound was crazy! and Why is the sound so different? But all I did was move some of the elements around. I didn’t pump anything or try to get the most out of the equipment. I didn’t even know about any of that stuff back then. So, I was really taken by how a different approach - a subtler approach – to the sound, in that moment, had caused a reaction.” It was four years later, while Joseph was working on Fly Paper, that things began to click into place, when a conversation with music producer Flying Lotus turned the artist on to two vital concepts: the importance of

The January edition of PSNEurope is all about NAMM, featuring an in-depth interview with NAMM CEO Joe Lamond as well as insights from some of the show's top pro audio exhibitors about why they keep coming back year after year. In addition, we are given an exclusive look at the brand new KSL system, which has just been on the road with legendary dance duo the Chemical Brothers, while SSE founder John Penn takes us inside the company's recent acquisition by Solotech. Plus we have all the latest news, views and analysis from across the pro audio market.