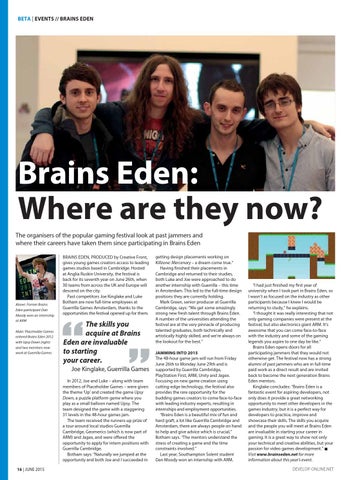 Brains Eden: Where are they now? The organisers of the popular gaming festival look at past jammers and where their careers have taken them since participating in Brains Eden

BRAINS EDEN, PRODUCED by Creative Front, gives young games creators access to leading games studios based in Cambridge. Hosted at Anglia Ruskin University, the festival is back for its seventh year on June 26th, when 30 teams from across the UK and Europe will descend on the city. Past competitors Joe Kinglake and Luke Botham are now full-time employees at Guerrilla Games Amsterdam, thanks to the opportunities the festival opened up for them.

The skills you acquire at Brains Eden are invaluable to starting your career. Joe Kinglake, Guerrilla Games In 2012, Joe and Luke – along with team members of Placeholder Games – were given the theme ‘Up’ and created the game Upsy Down, a puzzle platform game where you play as a small balloon named Upsy. The team designed the game with a staggering 31 levels in the 48-hour games jam. The team received the runners-up prize of a tour around local studios Guerrilla Cambridge, Geomerics (which is now part of ARM) and Jagex, and were offered the opportunity to apply for intern positions with Guerrilla Cambridge. Botham says: “Naturally we jumped at the opportunity and both Joe and I succeeded in

getting design placements working on Killzone: Mercenary – a dream come true.” Having finished their placements in Cambridge and returned to their studies, both Luke and Joe were approached to do another internship with Guerrilla – this time in Amsterdam. This led to the full-time design positions they are currently holding. Mark Green, senior producer at Guerrilla Cambridge, says: “We get some amazingly strong new fresh talent through Brains Eden. A number of the universities attending the festival are at the very pinnacle of producing talented graduates, both technically and artistically highly skilled, and we’re always on the lookout for the best.” JAMMING INTO 2015 The 48-hour game jam will run from Friday June 26th to Monday June 29th and is supported by Guerrilla Cambridge, PlayStation First, ARM, Unity and Jagex. Focusing on new game creation using cutting-edge technology, the festival also provides the rare opportunity for the budding games creators to come face-to-face with leading industry experts, resulting in internships and employment opportunities. “Brains Eden is a beautiful mix of fun and hard graft, a lot like Guerrilla Cambridge and Amsterdam, there are always people on hand to help and give advice which is crucial,” Botham says. “The mentors understand the stress of creating a game and the time constraints involved.” Last year, Southampton Solent student Dan Moody won an internship with ARM.

“I had just finished my first year of university when I took part in Brains Eden, so I wasn’t as focused on the industry as other participants because I knew I would be returning to study,” he explains. “I thought it was really interesting that not only gaming companies were present at the festival, but also electronics giant ARM. It’s awesome that you can come face-to-face with the industry and some of the gaming legends you aspire to one day be like.” Brains Eden opens doors for all participating jammers that they would not otherwise get. The festival now has a strong alumni of past jammers who are in full-time paid work as a direct result and are invited back to become the next generation Brains Eden mentors. Kinglake concludes: “Brains Eden is a fantastic event for aspiring developers, not only does it provide a great networking opportunity to meet other developers in the games industry, but it is a perfect way for developers to practice, improve and showcase their skills. The skills you acquire and the people you will meet at Brains Eden are invaluable in starting your career in gaming. It is a great way to show not only your technical and creative abilities, but your passion for video games development.” Visit www.brainseden.net for more information about this year&#39;s event. DEVELOP-ONLINE.NET

The cutting edge of motion capture