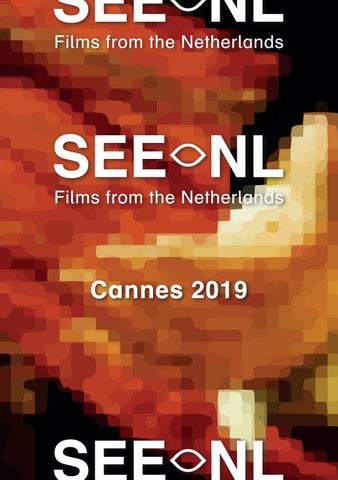 That Which Is to Come Is Just a Promise

Producers on the Move Joram Willink

In the market The Beast in the Jungle

My Extraordinary Summer with Tess

Minority co-productions in the market The Best of Dorien

Buñuel in the Labyrinth of the Turtles

The Miracle of the Sargassso Sea

A Tale of Three Sisters

TAKE ME SOMEWHERE NICE Ena Sendijarević When Alma travels from Holland to Bosnia by road she ﬁnds herself on an increasingly unpredictable adventure through the country’s scorching heartland. Alma travels from the Netherlands to Bosnia to visit her sick father whom she has never met. Teaming up with her detached cousin and his charming best friend, they embark together on an increasingly unpredictable road trip adventure through the country’s scorching heartland. Thu May 16, 16:30 Alexandre 3 Fri May 17, 14:00 Palais C (market) Wed May 22, 11:30 Studio 13 (with Q&amp;A) Wed May 22, 20:00 Arcades 1 (with Q&amp;A) Thu May 23, 21:00 La Napoule

SICK, SICK, SICK Alice Furtado Artur bleeds to death. Silvia wants him back. Silvia is an introspective teenager. Everything abruptly changes when Artur arrives. Silvia is fascinated by the boy’s vitality, who nevertheless suffers from a serious congenital disease - haemophilia. They dive into an intense routine together, until the day he has an accident and bleeds to death. Silvia gets sick and sees her life turn into a strange nightmare. The mourning gradually becomes an obsession, and obsession becomes a goal - Silvia will do anything to bring him back to life.

THAT WHICH IS TO COME IS JUST A PROMISE Flatform In the course of a long, slow take over Funafuti, both drought and floods appear in a constant uninterrupted rhythm. The state of flux between both type of events is reflected in the places and actions of the inhabitants making the island&#39;s extremes seem familiar: the air is riven with waiting and suspension. The island of Funafuti, in the archipelago of Tuvalu, for some years now has become the stage for a unique phenomenon. Due to the unnatural warming of the sea, salt water seeps into the subsoil bubbling up through the porous terrain provoking floods which put the future of life on this island at risk.

IN ALASKA Jaap van Heusden He is learning for the ﬁrst time in his life what it actually means to be alive. Woody, a seventeen-year-old boy from a tiny village in Alaska, is so depressed he wants to end his life. Instead he does something epically stupid: he shoots the oil pipeline that crosses the state and overnight becomes a most wanted criminal, hunted by experienced special agent Susan Tarheel (54). While Woody has to run for his life, he’s learning for the first time what it truly means to be alive.

WAYS TO RUN (WORKING TITLE) Aboozar Amini In Kabul, a war-torn city with an uncertain future, the line that divides good and bad is as thin as the line between life and death. Abas (45) is a scrupulous bus driver, a notorious hashish smoker and gambler. With the help of his apprentice, Afshin (16), Abas is determined to maintain the order in the only place under his jurisdiction, his bus. Afshin’s father is gone. With his cleverness and loyalty to Abas, Afshin has earned the title &quot;The Lion of Kabul&quot;, while with his salary the family barely makes ends meet. When he is invited by a gang of pickpockets to join them, his loyalty to Abas is put to the test.

8 PRODUCERS ON THE MOVE

JORAM WILLINK Joram Willink, co-founder of BIND, is an award-winning creative producer who initiates and works closely with writers and directors to create stories that inspire social change. His productions have been awarded prizes such as an International Emmy Award, a Silver Bear, TIFF awards, the Prix Jeunesse and 10 Golden Calves, including Best Film. His latest film MY EXTRAORDINARY SUMMER WITH TESS was awarded the Special Mention by the Generation Jury at Berlinale 2019 and won the Grand Prize at the New York International Children’s Film Festival 2019. At Producers on the Move Joram will present and seek finance on MASCOT, the new film by Remy van Heugten. The pair previously enjoyed fruitful collaboration on SON OF MINE (GLUCKAUF) which world-premiered in Tiger competition at IFFR 2015, later winning 4 major Golden Calves (Dutch Academy Awards) including Best Film. Joram is currently in post-production on the journalist investigative thriller THE JUDGEMENT starring Fedja van Huêt (CHARACTER, Oscar best Foreign language film) and Yorick van Wageningen (THE GIRL WITH THE DRAGON TATTOO), based on a true story about the current state of play of journalism and fake news. BIND Joram Willink Tel: 020 364 0030 joram@bindfilm.nl www.bindfilm.com

THE BEAST IN THE JUNGLE Clara van Gool Based on the novel by Henry James, THE BEAST IN THE JUNGLE depicts, physically and poetically, the enigmatic and epic love story of John Marcher and May Bartram. During a chance encounter ten years after first meeting, May reminds John that he once revealed to her a deep and menacing conviction that his life would be defined by a life-changing experience – one that was waiting for him “like a beast in the jungle”. Intrigued by his continued belief in this foreboding secret, May decides to stay by John’s side and soon develops feelings of genuine love for him.

THE CONDUCTOR Maria Peters Based on a true story, Antonia Brico, the ﬁrst woman to conduct a symphony, is torn by ambition and love as she tries to overcome the bias against female musicians. In the 1920’s, Antonia Brico aspires to become the first woman to lead an orchestra but after she arouses the interest of Frank she is torn between ambition and love. She flees to Holland, where conductor Mengelberg tells her to see Karl Muck, who gets her accepted into the Berlin State Academy. Her debut is a success but the resulting furore forces her to return to the US, where the bias against women musicians inspires her to start a female orchestra.

MY EXTRAORDINARY SUMMER WITH TESS Steven Wouterlood Sam is practising being alone in order to avoid the pain of loss, but after an adventure with Tess he discovers the value of family. On the first day of their holiday on the Dutch island of Terschelling, the brother of 10-year-old Sam breaks his leg - too bad for him, but great news for Sam. Why? Because it leads him to the idiosyncratic Tess, who has an ingenious plan to get to know the father who is a stranger to her. With a little help from Sam, she’s got just a week to achieve this… Wed May 15, 13:30 Olympia 6 (priority badges)

Still: The Road of Repentance

The selection CineSud Shorts | New Dutch Talent offers a curated high quality selection of short films - from historic drama to dance film made by new talent from the Netherlands: n

THE BEST OF DORIEN B. Anke Blondé At age 37, a veterinarian and mother of two feels betrayed by her husband, parents and her body. Her subsequent rebellion is a glorious and funny journey of self-discovery… Dorien (37) has everything to make her happy: a successful husband, two adorable children and a veterinary practice full of small pets. But when she discovers a year-long affair among her parents and her husband turns out to be very close with a colleague, she begins to doubt. A phone call bearing bad news is the last straw. She feels lost, alone. Dorien evaluates her life: is this it? THE BEST OF DORIEN B. is a dramatic comedy about a woman who among all the craziness rediscovers herself.

BUÑUEL IN THE LABYRINTH OF THE TURTLES Salvador Simó In a stranger-than-ﬁction tale beﬁtting the master surrealist director, this ﬁlm tells the true story of how Buñuel made his sophomore movie. Paris, 1930. Luis Buñuel is left penniless after a scandal surrounding his first film L’AGE D’OR. His friend, sculptor Ramón Acín, buys a lottery ticket with the promise to pay for his next film if he wins. Incredibly, the ticket is a winner and they set out to make the movie. Both a buddy adventure and fascinating episode of cinematic history, the film utilizes sensitive performances and excerpts of Buñuel’s own production footage, to present a moving portrait of an artist chasing his purpose.

THE MIRACLE OF THE SARGASSSO SEA Syllas Tzoumerkas As a suicide case unfolds, two women, a murder suspect and a law enforcer, realise they have something in common: contempt for their lives and a desire to start over. In a small eel-farming town in Greece, two women live solitary lives. One of them is Elisabeth, a once-ambitious policewoman now living a joyless, hung-over life; the other is Rita, a quiet, mysterious sister of a local music star. When a sudden suicide case upsets the town, the two women who have been ignoring each other’s existence so far, begin drifting towards each other. As the secrets hidden in the swamps begin to surface, they will have a chance to become each other’s saviours.

MONOS Alejandro Landes On a faraway mountaintop, eight kids with guns watch over a hostage and a conscripted milk cow. Far away from everything, a group of teenagers with guns do whatever they want. But this Neverland is actually the setting of a mission: the kids are child soldiers with war names under the command of Wolf (17), whose job it is to make sure that Doctor (45), as they call the American kidnapped woman in their custody, stays alive. She is the only adult presence and though at times she takes on a sort of maternal role, she’s secretly preparing her escape.