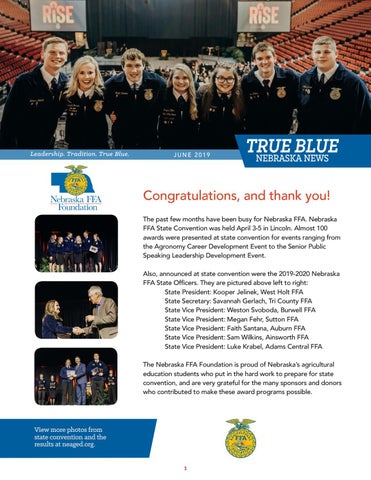 View more photos from state convention and the results at neaged.org. 1

Like many others who have worn the FFA jacket I have fond memories of early morning bus rides to district contests, making new friends at conferences and traveling to State and National Convention as a member of the Gothenburg FFA Chapter. I have continued to be involved with FFA into my professional career. Now I serve as the Nebraska FFA Foundation President. I’m excited about the important work the foundation is accomplishing to grow leaders, build communities and strengthen agriculture! Did you know that the United States Department of Agriculture reports a 40 percent shortage annually in college graduates with experience with agriculture, food and natural resources?

This is why I’m passionate about FFA because we need more students with career ready skills and experiences in agriculture to fill high demand jobs in Nebraska, all across the US and globally. If we are not preparing more students who have those skills and experiences, we will continue to have society, right in our backyard and across the globe misunderstand agriculture and its impact on global opportunities and challenges.

I am proud of the work we do at the Nebraska FFA Foundation to celebrate and elevate young agricultural leaders. Thank you for providing momentum to propel success for students, communities and agriculture in Nebraska higher and higher.

CELEBRATING A LIFETIME OF LEADERSHIP

guidance extended not just in FFA, but in life and he has an ability to see the potential in others that they don’t even see in themselves.”

Rich had a passion for developing people. Seth Derner, former National FFA President and former Nebraska FFA North Central Area Vice President, says “Rich Katt is not just our former State Advisor, he is a mentor and friend to many of us who walked the state officer path. Rich’s

Thank You For Supporting Nebraska’s Youth

These companies have partnered with Nebraska FFA and the Nebraska FFA Foundation by donating at least $5,000. Thank you for your support of programs that develop Nebraska’s agriculture youth. Premier Sponsors ($25,000 or more)

I BELIEVE IN THE FUTURE OF AG CAMPAIGN UPDATE

Record-breaking I Believe in the Future of Ag Donations

This campaign serves as an outlet for local FFA chapters to receive donations for innovative projects in their classrooms, leadership programming, community service projects and field trips to advance agriculture education in their schools. Chapters receive 100 percent of all funds directed to them and a portion of a $35,000 matching grant provided by the Nebraska FFA Foundation. This year, 123 of the 189 Nebraska FFA chapters participated in the campaign. The average total donation per chapter was over $3,000 from local donors.

The local chapter grant program, in its third year, supports Nebraska agricultural education classrooms, FFA programs and individual student entrepreneurship Supervised Agricultural Experiences. Funds are provided by supporters of the Nebraska FFA Foundation and its general fund donors. This year, grant requests may be any amount up to $10,000 each. Applications are being accepted until June 30, 2019. Successful proposals from 2018-19 varied from greenhouse repairs to a CNC router to grow towers to animal learning lab.

Anderson, FFA advisor for the Lyons-Decatur N.E. FFA chapter, was nominated for the award with support by colleagues and community members. Kylie Penke, whom nominated Anderson shared that “Kevin gravitates toward leadership roles…He has been a teacher for twenty years and served as president of the Elim Church Council and Lyons Community Foundation. He has raised his children to be active in 4-H and FFA, and has lead their 6

4-H clubs. In all of the organizations mentioned, Kevin has been active in selecting and distributing college scholarships to youth all over the country!” The Gary Scharf Helping Hand Award recognizes a Nebraska agriculture teacher or FFA advisor for what he or she has done in helping others, specifically in the school and community outside of agriculture education and FFA. Anderson was announced as the award winner during the Nebraska FFA State Convention in Lincoln. He received a plaque and $500 cash award from the Nebraska FFA Foundation.

DONOR AND PAST STATE OFFICER EVENT

Almost 100 guests joined us at the Nebraska FFA Foundation Past State Officer and Special Donor Reception and Celebration during Nebraska FFA State Convention.

During the celebration, the Nebraska FFA Foundation honored teams with an anniversary in five-year increments. The 1993-1994 team celebrated their 25-year anniversary by performing opening ceremonies during the final session of convention. They are pictured above. Those teams were also invited to attend special tours of the University of Nebraska­­— Lincoln East Campus, The Career Academy Agriculture Classroom and greenhouse and Memorial Stadium. To find additional photos of this year’s event, go to neffafoundation.org.

Record-breaking I Believe in the Future of Ag Results