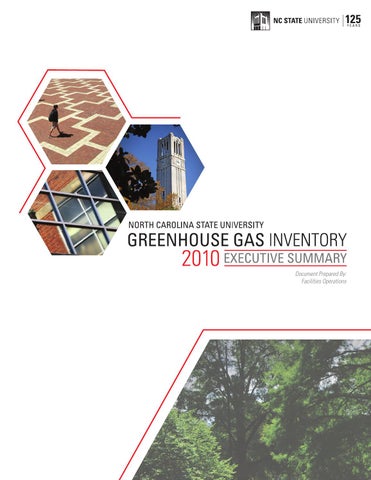 BACKGROUND Many students, faculty and staff at NC State University are minimizing the university’s impact on the environment and on greenhouse gas emissions. In recognizing this contribution the Chancellor signed the American College and University Presidents’ Climate Commitment (ACUPCC) in 2008. This commitment requires that the university develop a Climate Action Plan (CAP) as well as conduct a greenhouse gas (GHG) inventory every other year. The inaugural GHG inventory was completed in 2008 and NC State’s Climate Action Plan was developed in 2010, which detailed the university’s strategies to work toward climate neutrality by 2050. This report serves as the second GHG inventory for NC State and the first opportunity to begin tracking progress toward the goal of neutrality.

BOUNDARIES NC State is comprised of three main campuses and more than 100 satellite offices, which amounts to more than 15 million square feet of building space and a population of more than 39,900. The three campuses included in the inventory are Main, Centennial and Centennial Biomedical as well as satellite offices for which NC State manages the utility accounts. Satellite offices not included in this report have their utility accounts managed by another unit or are a joint endeavor between NC State and North Carolina Agricultural and Technical State University. SCOPES &amp; TIME FRAME Greenhouse gases are described in scopes. Scope I is from direct emissions from the institution. Scope II emissions are from purchased utilities, and Scope III emissions are indirect emissions from the institution.

Scopes I and II emissions are based on the calendar year (CY) 2010 for the possible implementation of federal or state requirements. Scope III emissions are based on fiscal year (FY) 2009 – 2010, since most university departments track their records on the fiscal calendar. METHODOLOGY The calculations are based on the Climate Registry, Clean Air Cool Planet’s Campus Carbon Calculator version 6 and Atmosfair. RESULTS &amp; COMPARISONS Figures 1 and 2 on the following pages illustrate the 2010 GHG emissions for NC State. Figures 3 and 4 illustrate the reduction in GHG emissions. There has been a 7% overall reduction, with electricity, refrigerants and air travel having the largest decrease in total emissions. Overall, the emissions reduced from 270,069 metric tons of carbon dioxide equivalent (MTCDE) in 2008 to 251,364 MTCDE in 2010. The majority of GHG emissions from the university are from electrical consumption, natural gas usage and commuting. Scope I emissions account for 32% and Scope II comprise nearly 53% of the total emissions. GROWTH Currently the campus enrollment is projected to grow from 34,376 in 2010 to 37,000 by 2020. This increase in student population is estimated to increase NC State’s GHG emissions by approximately 13% at today’s current trends. Figure 5 illustrates the university’s growth over time in two scenarios; one being Business As Usual (BAU) less the reductions from the recommendations in 2010 Climate Action Plan. As indicated by this figure the university is making significant progress in reducing its GHGs from the implementation of various projects detailed in the CAP and the efforts of the university community.

This graph summarizes the 2010 GHG emissions from NC State University

This table details the 2010 GHG emissions from NC State University

This graph shows GHG emissions for three scenarios in addition to the actual reduction since 2008.

ELECTRONIC AVAILABILITY This document is available online at : go.ncsu.edu/greenpublications Minimal copies were printed to reduce resources. Please think twice before printing it. 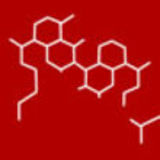