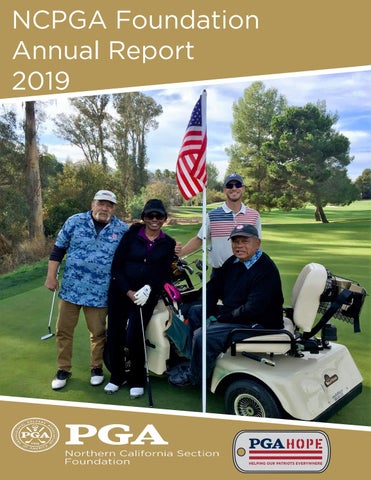 The Northern California Toyota Dealers Association is a proud supporter of PGA HOPE. Their mission to bring the joy of golf to injured and disabled veterans helps better the lives of so many deserving heroes, both physically and emotionally. We stand by our veterans. We stand by PGA HOPE.

A MESSAGE FROM OUR LEADERSHIP 2019 has been a tremendous year for the Northern California PGA Foundation, having now served over 1,000 Veterans through PGA HOPE, awarding our first Chevron Langley Veteran Scholarship, announcing Keena Turner, 49ers Legend as our PGA HOPE Ambassador and hosting the 2nd Annual PGA HOPE Rally Scramble at Green Valley Country Club on Veterans Day. Every one of the over 1,000 Veterans we’ve served have their own unique stories of struggles and how PGA HOPE has helped them in their process of healing. It’s through your generosity that we have been able to impact – and in some cases save lives. As you will read in this report, our financial strength and breadth of programming continues to grow. The NCPGA Foundation participates in Guidestar, the world’s largest source of information on nonprofit organizations, where we were awarded the Silver Seal of Transparency. As we look toward the future, we are excited to expand our impact in the communities that we serve through our three-fold mission: To serve Veterans - their health and their families, to provide resources to PGA members serving their communities in Northern California and Northwestern Nevada and to grow the game of golf. We are inspired every day by the words of gratitude received from the Veterans we serve, from the PGA Professionals who provide life-changing experiences through the game of golf and from you – our community of supporters. Sincerely,

“We are inspired every day by the words of gratitude received from our Veterans.”

Golf as Therapy – A Moment in Time Standing over a golf ball, thinking about how to swing the club, move the ball forward – it’s a moment in time where our Veterans can’t be thinking about the ‘bad stuff,’ the memories that haunt them. It’s how PGA HOPE (Helping Our Patriots Everywhere) uses golf to help heal and

build a community of support. At no cost to our Veterans, PGA HOPE provides six weeks of adaptive golf instruction, followed by a graduation and ongoing playing opportunities.

“PGA HOPE is the ONLY sports program endorsed by the Department of Veteran Affairs, which allows VA clinicians and therapists to prescribe PGA HOPE as a healing therapy.”

“22 Veterans a day commit suicide... PGA HOPE is working to change this statstic by using the game of golf as a form of therapy.”

“EVERY $250 RAISED FUNDS A VETERAN THROUGH PGA HOPE”

s a company that has been around for 120 years, you may know Capital Insurance Group for several reasons. As a regional property casualty insurer, you may know us through our trusted coverage protecting your home, car, business, farm, or golf clubs. You may know us through our network of independent agents who offer personalized, local decision making and expertise. And if you donâ&#x20AC;&#x2122;t know us yet, we hope you will. For the Golf Course Owner We provide tailored coverage to over 200 golf courses throughout the Western U.S., to protect their unique exposures. CIG offers golf club owners and managers a custom-designed risk and liability golf course program. From clubhouse and structures, to retail merchandise and maintenance equipment, we have you covered.

THE LANGLEY: A TRIBUTE TO LEGENDS

CIG continues its commitment as title sponsor of this annual charity fundraiser.

For the Golf Player For the seasoned golf professional, CIG wants to protect your investment. Protect your golf equipment at home, on the course, or on vacation with CIGâ&#x20AC;&#x2122;s Golf Equipment Coverage! We offer cost-saving deductible options for your golf equipment, clubs, accessories, and carts, as well as worldwide protection on land, at sea, or in the air. For the Golf Community At CIG, our support goes beyond a policy. We remain proud sponsors of The Langley: A Tribute to Legends charity fundraising event, Junior Tour of Northern California (JTNC) and TaylorMade Pebble Beach Invitational.

For 120 years, we’ve been proud to call California home. As a regional property and casualty insurer, we take great pride in living in such a renowned golf region and protecting the players and the courses. But beyond writing an insurance policy, we recognize the importance of giving back. We have been a proud title sponsor of “The Langley, A Tribute to Legends” for nearly 10 years. From golf clubs to golf carts, our expert agents can create a plan that protects your unique exposures.

â&#x20AC;&#x153;I have been struggling with physical and mental disability, 17 surgeries, in and out of TBD/PTSD facilities for over 10 years and rarely leaving my home. Besides my family, this has been the only thing that I have found that has helped me. Thank you for this program and being so accommodating with my disabilities,â&#x20AC;? Veteran Anthony. 10

100-Year Old U.S. Navy Veteran Stephen Layton â&#x20AC;&#x201C; Oldest Veteran to Graduate From the National PGA HOPE Program 100-year old Stephen Layton, a U.S. Navy Veteran and a native of South Lake Tahoe, CA, is the oldest PGA HOPE graduate in the Unites States. Born in Highlands, NJ, Layton was a gunner in the U.S. Navy and fought in the battle of Guadalcanal during World War II, where he was injured by a bomb explosion that earned him a Purple Heart. After his service, Layton spent his career as a switchman for the Southern Pacific Railroad.

Today, Layton resides at the Community Living Center, a part of the Palo Alto Veterans Healthcare System. Layton and fellow Veterans were transported to Pleasanton Golf Center, in Pleasanton, CA, for weekly PGA HOPE clinics throughout May and June, prior to their formal graduation from the program, where he became the oldest living PGA HOPE graduate.

Will Stockholm, US Marines Corps Gunnery, Giving Back as PGA HOPE Ambassador recognizing the positive impact the game of golf has on Veterans looking to assimilate back into society. Since his first session, Will has become one of the most active supporters of PGA HOPE, and is a well-respected mentor to fellow Veterans.

4-Time San Francisco 49ers Super Bowl Champion Keena Turner Supporting Veterans as PGA HOPE Ambassador are America’s heroes and I am amazed at how the game of golf and PGA HOPE have made such an impact on so many worthy individuals. I look forward to doing my part to help improve the lives of men and women who have valiantly served and protected the United States of America.”

“Getting out on the golf course, connecting with other Veterans and feeling the support is a key healing benefit of the PGA HOPE program.”

After traveling 3,000 miles across the country the Veterans, representing the Northern California PGA Section, arrived at Bethpage State Park, Long Island, NY on Monday, May 13 to participate in the PGA HOPE Secretary’s Cup, a spirited 9-hole golf competition for military Veterans - that served as the kick-off to 2019 PGA Championship week.

A first-of-its-kind tournament, TPC Harding Park was home to the inaugural San Francisco Pride Pro-Am Golf Tournament on June 26, 2019. The tournament was created to promote awareness and equality, centered on an entire day dedicated to inclusion and feeling comfortable ‘in your own skin,’ regardless of age, color, gender, or sexual orientation. Created by Northern California PGA Members Greg Fitzgerald, the Head Golf Professional at the Institute Golf Course in Morgan Hill, Calif., and Tom Smith, the General Manager at TPC Harding Park in San Francisco, the tournament benefitted the San Francisco Pride Celebration - and welcomed the LGBTQ community and friends in the spirit of equality on an incredible golf course that will host the game’s best professionals for the PGA Championship, May 11-17, 2020. “The response to the inaugural event was tremendous, and I’m humbled by how much the golf and LGBTQ communities came together,” said Fitzgerald. “The LGBTQ community represents a tremendous growth market for the game of golf, and we appreciate organizations like the PGA of America, especially my home section in Northern California, making inclusion such a top priority.”

Salazar & Alioto Awarded 2019 Jim Langley Scholarships The Northern California PGA Foundation’s “Jim Langley Scholarship Fund” was created to support and encourage continuing education by assisting students, residing within the bounds of the Northern California PGA Section, with post-secondary schooling. Graduating high school seniors are provided with a means to achieve their dreams and promote the fundamental values that this great game has to offer. Each year, a $2,000 scholarship is awarded to one boy and one girl to help pay for college expenses, including tuition, fees, books or supplies.

be extremely proud of the individuals who have earned the scholarship bearing his name. 2019 Winners: Alissa Salazar and Anthony Alioto. Alissa Salazar, graduated from WC Wood HS in Vacaville and going to Dominican University to study Business Management & Adminisration. Anthony Alioto, graduated from Redwood HS in Corte Madera going to University of San Diego to study art and economics.

The Scholarship was established in honor of the late Jim Langley, a PGA Professional with an unwavering dedication to the game of golf as the legendary Head Pro at Cypress Point for more than 30 years. Today, Jim Langley would

Inaugural Chevron Langley Veteran’s Scholarship Winner, Greg Zaborski, Jr., Now Pursuing His PhD in Material Science & Engineering at Stanford University The inaugural Chevron Langley Veteran’s Scholarship, in the amount of $7,000, was awarded in the spring of 2019 to Greg Zaborski, Jr., 30, a former Marine and recent graduate of the University of California Berkeley with a degree in Mechanical Engineering. The scholarship program was established by the NCPGA Foundation in 2018, and sponsored by the Chevron Veteran’s Employee Network, to assist United States Veterans who wish to pursue a post-secondary education and where financial need is a factor. Zaborski, Jr. now attending Stanford University as a NSF-GRFP Fellow and pursuing a PhD in Material Science & Engineering, boasts an impressive resume filled with awards and accolades, including numerous military honors through his service as a Marine from 2006 – 2010. Among his commendations, Zaborski, Jr. received the Combat Action Ribbon (Afghanistan), Humanitarian Service Medal, Global War on Terrorism Expeditionary Medal (Kuwait), Global War on Terrorism Service Medal and the National Defense Service Medal, among others.

“I am truly humbled to receive the first Chevron Langley Veteran’s Scholarship,” said Zaborski, Jr. “Given the criteria for this honor, it is gratifying to know that my hard work, determination and persistence in reaching my career goals has been recognized. I want to thank the Chevron Veteran’s Employee Network, as well as the Northern California PGA Foundation, for choosing me for this award, and helping to fund the next chapter in my education.”

The Langley: A Tribute to Legends Charity ProAm, provides an intimate golf experience like no other. Guests enjoyed a two-day event, starting with “An Evening with Golf’s Legends” on Monday, August 12th at The Beach Club next to Stillwater Cove, where attendees had a meet and greet with the honorees. On Tuesday, August 13th guests were treated to The Langley Charity

Named after former PGA Head Professional Jim Langley of Cypress Point Club, The Langley is the NCPGA Foundation’s premier charitable fundraising event designed to honor the game’s legends, and supports the mission of the Foundation – serving Veterans, community and growing the game of golf. Langley was admired world-wide for his generosity and humble nature, and is the epitome of what this event is about. Jim was a UC Berkeley alumni, foursport athlete, and member of Cal’s famous 1959 Champion basketball team, and he also proudly served in the US Marine Corps.

Bank of America/Merrill Lynch Grow Support through Invest in HOPE

Our complete 990 for 2019 us available at Guidestar.org. NCPGA FOUNDATION

How to Support Our Veterans andâ&#x20AC;¦ HELP US RAISE HOPE

SUPPORT OUR MISSION BY IMPACTING LIVES THROUGH GOLF

Every $250 raised funds a Veteran through PGA HOPE Your generous, taxdeductible donation to PGA HOPE will help positively impact the Veterans who protect our freedom.