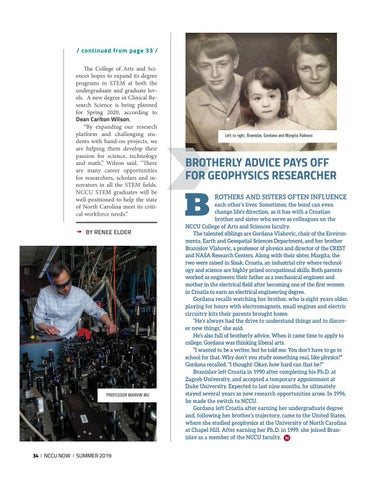 / continued from page 33 / The College of Arts and Sciences hopes to expand its degree programs in STEM at both the undergraduate and graduate levels. A new degree in Clinical Research Science is being planned for Spring 2020, according to Dean Carlton Wilson. “By expanding our research platform and challenging students with hand-on projects, we are helping them develop their passion for science, technology and math,” Wilson said. “There are many career opportunities for researchers, scholars and innovators in all the STEM fields. NCCU STEM graduates will be well-positioned to help the state of North Carolina meet its critical workforce needs.”

BROTHERLY ADVICE PAYS OFF FOR GEOPHYSICS RESEARCHER ROTHERS AND SISTERS OFTEN INFLUENCE each other’s lives. Sometimes, the bond can even change life's direction, as it has with a Croatian brother and sister who serve as colleagues on the NCCU College of Arts and Sciences faculty. The talented siblings are Gordana Vlahovic, chair of the Environmenta, Earth and Geospatial Sciences Department, and her brother Branislov Vlahovic, a professor of physics and director of the CREST and NASA Research Centers. Along with their sister, Margita, the two were raised in Sisak, Croatia, an industrial city where technology and science are highly prized occupational skills. Both parents worked as engineers; their father as a mechanical engineer and mother in the electrical field after becoming one of the first women in Croatia to earn an electrical engineering degree. Gordana recalls watching her brother, who is eight years older, playing for hours with electromagnets, small engines and electric circuitry kits their parents brought home. “He’s always had the drive to understand things and to discover new things,” she said. He’s also full of brotherly advice. When it came time to apply to college, Gordana was thinking liberal arts. “I wanted to be a writer, but he told me: You don’t have to go to school for that. Why don’t you study something real, like physics?” Gordana recalled. “I thought: Okay, how hard can that be?” Branislav left Croatia in 1990 after completing his Ph.D. at Zagreb University, and accepted a temporary appointment at Duke University. Expected to last nine months, he ultimately stayed several years as new research opportunities arose. In 1996, he made the switch to NCCU. Gordana left Croatia after earning her undergraduate degree and, following her brother’s trajectory, came to the United States, where she studied geophysics at the University of North Carolina at Chapel Hill. After earning her Ph.D. in 1999, she joined Branislav as a member of the NCCU faculty. 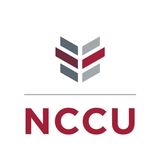 Catch up on the people, excitement and traditions of North Carolina Central University by reading the latest edition of NCCU Now magazine....

Catch up on the people, excitement and traditions of North Carolina Central University by reading the latest edition of NCCU Now magazine....