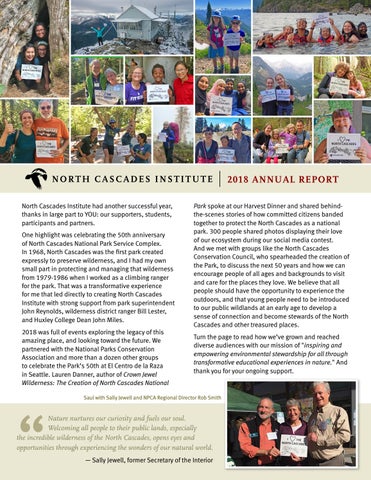 2018 ANNUAL REPORT North Cascades Institute had another successful year, thanks in large part to YOU: our supporters, students, participants and partners. One highlight was celebrating the 50th anniversary of North Cascades National Park Service Complex. In 1968, North Cascades was the first park created expressly to preserve wilderness, and I had my own small part in protecting and managing that wilderness from 1979-1986 when I worked as a climbing ranger for the park. That was a transformative experience for me that led directly to creating North Cascades Institute with strong support from park superintendent John Reynolds, wilderness district ranger Bill Lester, and Huxley College Dean John Miles. 2018 was full of events exploring the legacy of this amazing place, and looking toward the future. We partnered with the National Parks Conservation Association and more than a dozen other groups to celebrate the Park’s 50th at El Centro de la Raza in Seattle. Lauren Danner, author of Crown Jewel Wilderness: The Creation of North Cascades National

Park spoke at our Harvest Dinner and shared behindthe-scenes stories of how committed citizens banded together to protect the North Cascades as a national park. 300 people shared photos displaying their love of our ecosystem during our social media contest. And we met with groups like the North Cascades Conservation Council, who spearheaded the creation of the Park, to discuss the next 50 years and how we can encourage people of all ages and backgrounds to visit and care for the places they love. We believe that all people should have the opportunity to experience the outdoors, and that young people need to be introduced to our public wildlands at an early age to develop a sense of connection and become stewards of the North Cascades and other treasured places. Turn the page to read how we’ve grown and reached diverse audiences with our mission of &quot;inspiring and empowering environmental stewardship for all through transformative educational experiences in nature.&quot; And thank you for your ongoing support.

Nature nurtures our curiosity and fuels our soul. Welcoming all people to their public lands, especially the incredible wilderness of the North Cascades, opens eyes and opportunities through experiencing the wonders of our natural world. — Sally Jewell, former Secretary of the Interior

Our 2018 Successes, Thanks to You SCHOOLS

• Doubled our Youth Ambassadors program with two cohorts (Sedro-Woolley and Concrete), with each student volunteering 10 hours on stewardship projects and receiving 56 hours of college preparation. • Welcomed 116 students to the free NW Youth Leadership Summit in Seattle, equipping them with personal and professional development skills to serve the environment and their communities.

• Engaged in a Culture and Climate Audit, a quantitative and qualitative survey of current and past staff, board members and graduate students. This is informing our equity, diversity, and inclusion efforts so that all of us—and all of our programs—are welcoming, relevant and accessible.

• Filled six Family Getaways, ran 137 Skagit Tours together with Seattle City LIght and North Cascades National Park, hosted 36 Conferences and expanded retail operations to engage with people of all ages from around the world.

• Welcomed SuJ’n Chon as program director at the Environmental Learning Center, while bidding a fond farewell to long-time influential staff members (and graduate alumni) Katie Roloson and Amy Brown, who took exciting positions at Yellowstone Forever and Bellingham Parks and Recreation, respectively. • Expanded capacity at our property in Marblemount by building an Accessory Dwelling Unit to house 5 more graduate students/seasonal staff (thanks to all who donated, including the M.J. Murdock Charitable Trust); cultivating the Confluence Garden to support our Foodshed Initiative; and beginning the conservation easement process with Skagit Land Trust.

Thank you for your support. For detailed program reports and a full list of supporters, visit ncascades.org/reports

We think education is key to caring for the environment and the work your organization does towards that end is invaluable. â&amp;#x20AC;&amp;#x201D; Jose and Lydia, NCI supporters, Lake Forest Park

Deferred revenue and other Line of Credit (staff housing purchase)

Contact Jodi Broughton at (360) 854-2596 or visit ncascades.org/support to learn how you can make a difference with your gift!

Letter from Sterling Clarren, Board Chair My wife introduced me to North Cascade Institute back in 1989. She was a school psychologist and discovered that she could get clock hours toward recertification by taking North Cascades Institute courses. We loved to camp and we loved the North Cascades and, soon enough, we learned to love the Institute’s classes for adults as well. They have increased our understanding of this magnificent world and our appreciation of being in the wilderness, and we are still signing up for them every year. In 2010, when I had a little more free time, I asked Saul Weisberg if there was a way for me to contribute to the Institute’s leadership, and I was delighted when I was asked to join the Board of Directors soon thereafter. Serving on this Board has been some of the most inspirational work that I have ever done.

and advocating for children with life-long challenges. Through the years I’ve learned that “development” happens to all of us, all the time. North Cascades Institute fosters experiences that contribute to one’s development. Skilled instructors foster learning about the natural world for grade school and high school students, who then become more compassionate advocates for the earth. I’ve met adults who smile when I say I work with the Institute and tell of how important and influential Mountain School or Youth Leadership Adventures was in their own development. I am proud that the Institute has expanded its programming to Forest School and Snow School, so we can reach more students in these influential ways.

I became the Board Chair in January 2017 and now enjoy welcoming others to our dynamic Board of Directors. Each of them comes with unique experiences, wisdom and excitement for our work. They include:

Thank you to them all, and also to Nan McKay for having served as board chair during an exciting and dynamic time of growth at the Institute. As a final note, one morning, as I woke on Ross Lake during a wonderful learning weekend with North Cascades Institute, I jotted down these lines:

The sky smiled and the waters flickered as I, lost among the bags and clothes scatter in the tent, Peeked beyond the zippered flap. This place, as much as a man can love a thing That is so much beyond the parts he names, I sit and add myself.

2018 Partners and Supporters Our sincere thanks to over 750 individuals, families, and organizations whose contributions helped make North Cascades Institute programs possible. Your support removed barriers, to help ensure natureâ&amp;#x20AC;&amp;#x2122;s classroom is inclusive and accessible to everyone. Thank you for giving generously to inspire and empower environmental stewardship for all .

2,736 fifth-graders from 16 regional communities came to Mountain School this year, with 46% being low-income and 39% identified as people of color. With your support, a total of $509,000 in tuition was subsidized by the Institute providing financial aid to 94% of the schools

79 participants through Youth Leadership Adventures this year. 94% of participants reported that they applied for YLA because of these support systems.

77% youth participants stated this was the first time they had ever participated in an outdoor program, 72% identified as low-income, and 63% as people of color. With your support, 95% of the students received scholarships to attend, with 66% paying nothing.

A look back at the accomplishments of North Cascades Institute in 2018 — successes thanks to our community of supporters and funders! 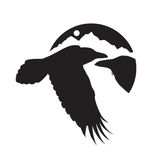