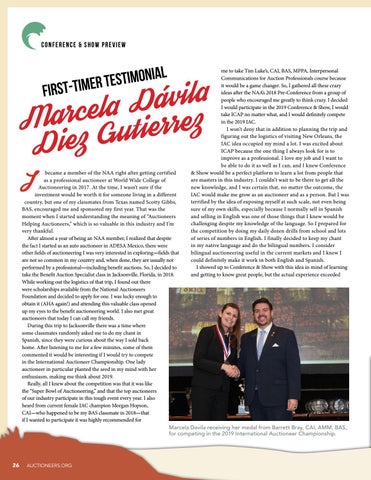 me to take Tim Luke’s, CAI, BAS, MPPA, Interpersonal Communications for Auction Professionals course because it would be a game changer. So, I gathered all these crazy ideas after the NAA’s 2018 Pre-Conference from a group of people who encouraged me greatly to think crazy. I decided I would participate in the 2019 Conference &amp; Show, I would take ICAP no matter what, and I would definitely compete in the 2019 IAC. I won’t deny that in addition to planning the trip and figuring out the logistics of visiting New Orleans, the IAC idea occupied my mind a lot. I was excited about ICAP because the one thing I always look for is to improve as a professional. I love my job and I want to be able to do it as well as I can, and I knew Conference &amp; Show would be a perfect platform to learn a lot from people that are masters in this industry. I couldn’t wait to be there to get all the new knowledge, and I was certain that, no matter the outcome, the IAC would make me grow as an auctioneer and as a person. But I was terrified by the idea of exposing myself at such scale, not even being sure of my own skills, especially because I normally sell in Spanish and selling in English was one of those things that I knew would be challenging despite my knowledge of the language. So I prepared for the competition by doing my daily dozen drills from school and lots of series of numbers in English. I finally decided to keep my chant in my native language and do the bilingual numbers. I consider bilingual auctioneering useful in the current markets and I knew I could definitely make it work in both English and Spanish. I showed up to Conference &amp; Show with this idea in mind of learning and getting to know great people, but the actual experience exceeded

became a member of the NAA right after getting certified as a professional auctioneer at World Wide College of Auctioneering in 2017. At the time, I wasn’t sure if the investment would be worth it for someone living in a different country, but one of my classmates from Texas named Scotty Gibbs, BAS, encouraged me and sponsored my first year. That was the moment when I started understanding the meaning of “Auctioneers Helping Auctioneers,” which is so valuable in this industry and I’m very thankful. After almost a year of being an NAA member, I realized that despite the fact I started as an auto auctioneer in ADESA Mexico, there were other fields of auctioneering I was very interested in exploring—fields that are not so common in my country and, when done, they are usually not performed by a professional—including benefit auctions. So, I decided to take the Benefit Auction Specialist class in Jacksonville, Florida, in 2018. While working out the logistics of that trip, I found out there were scholarships available from the National Auctioneers Foundation and decided to apply for one. I was lucky enough to obtain it (AHA again!) and attending this valuable class opened up my eyes to the benefit auctioneering world. I also met great auctioneers that today I can call my friends. During this trip to Jacksonville there was a time where some classmates randomly asked me to do my chant in Spanish, since they were curious about the way I sold back home. After listening to me for a few minutes, some of them commented it would be interesting if I would try to compete in the International Auctioneer Championship. One lady auctioneer in particular planted the seed in my mind with her enthusiasm, making me think about 2019. Really, all I knew about the competition was that it was like the “Super Bowl of Auctioneering,” and that the top auctioneers of our industry participate in this tough event every year. I also heard from current female IAC champion Morgan Hopson, CAI—who happened to be my BAS classmate in 2018—that if I wanted to participate it was highly recommended for Marcela Davila receiving her medal from Barrett Bray, CAI, AMM, BAS, for competing in the 2019 International Auctioneer Championship. 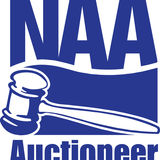