Achim Dittrich's solo exhibition of photography "A Glimpse of Nature: From Greenland to Greece" 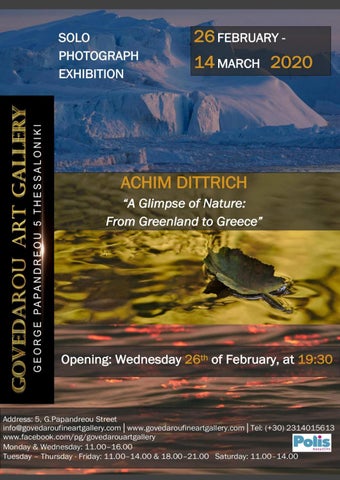 Achim Dittrich was born on the 5th of July 1964 in Freiburg in the southwestern corner of Germany. In 1983 he started studying Chemistry at the University of Mainz in Germany and in 1994 he got his Ph.D in Chemistry. After almost 2 years at the University of Leeds (UK), where he had a fellowship, he joined the IT company IBM in 1996 and started his professional career. During the school vacations with his family at the North Sea coast and in the Alps he had gotten to know the landscapes and the nature there with which he became fascinated. This experience, together with the several hiking tours he did in the very north of Sweden and Finland, in British Columbia-Canada and the traveling to the Amazon and the Pantanal in Brazil, got him in touch with Landscape - and Wildlife Photography and pursued this passion for years before the job changed his priorities. After years of absence he started again with photography - primarily of wildlife in the area of Germany where he lived in 2011 and won his first award in a competition in 2012. In 2016 he attended a photography workshop in Iceland to fulfill a childhood dream and learned about the secrets of landscape photography from the ground as well as from the helicopter from a world class landscape photographer, the Swede Hans Strand. In 2017, Achim Dittrich attended another workshop with Hans Strand in Greenland. This time it was about landscape photography on land, on a boat as well as aerial photography from a helicopter. It was that year that he decided to register as a part time freelance photographer, something he had dreamed of for a long time. In the winter of 2017 to 2018 he discovered the treasures of the National Park of the Delta of Axios – Loudias – Aliakmon west of Thessaloniki. Whenever he visits his family in Thessaloniki and finds the time, he drives to the deltas to observe and photograph the wildlife there - particularly various bird species. In autumn 2019, he attended a workshop at Meteora and the Pindos mountains to get to know these areas too. His solo exhibition “A glimpse of Nature: from Greenland to Greece“ at Govedarou Art Gallery in Thessaloniki in Feb. / Mar. 2020 is his first exhibition.

Interview of Achim Dittrich at Polis Magazino What is photography for you? a form of personal expression? A need for creation, communication, or something else? AD: Photography is indeed a form of personal expression, a true passion. It gets me out into nature, into landscapes where I feel completely by myself and where I have the chance to experience magic moments or special encounters with animals in their habitat. How would you characterize yourself as a photographer? AD: I believe I am a patient and persistent photographer. If I spot a scenery or a particular animal I may come back and try to get an even better photo in case I’m not satisfied with my first results. Also I like to explore landscapes and habitats in depth, sometimes for years to get a comprehensive collections of photos that express the richness of that particular area. What is the source of your inspiration? AD: The beauty of nature – in all aspects, to experience magic moments and my respect for wild animals in their habitats With which personality of Art world would you like to come into a dialogue and on what subject? AD: I’d like to come into a dialogue with Art Wolfe and Frans Lanting on their projects and with Sebastiao Salgado on black and white photography Would you consider to express yourself with any other form of art besides photography? AD: If I had a talent for it, I would like to draw – just with pencils on paper If you chose a different era to live and create what would it be and how do you think you would express yourself artistically? AD: Although the life of an artist at the beginning of the 20th century was certainly tough, I would have liked to be a painter before the 1st World War (without being affected by it of course) What is the relation of the creator to his work? AD: The work is the way a creator expresses him – or herself. I like to express my fascination of the beauty and the variety of nature What are your future plans? AD: Explore the natural treasures of Greece – especially in the north of the country further across the different seasons and further on to explore the wider Balkan and it’s wild nature. I’d like to show these treasures in further exhibitions and publications like articles and books with the particular emphasis on showing the beauty of nature to children. I’m convinced that we will only protect what we have learned to love.

Mountain forest in the back light

Orchid on a spring meadow

Light at the end of the path

Old tree in a winter landscape

Butterfly and fly on grass ears

A forest path on a September morning

Coral mushroom in a pine forest

Look me in the eyes little fly

Baby grasshopper on a grass blade

Young toadstool mushroom with a leaf

Full moon over the river Rhine

Greenland I: Magical light in a mid-summer night

Arctic fulmars on the cliff of an iceberg

Floating Ice in the Disco Bay

Iceberg in the light of a mid-summer night

Wild gorge in the Pindos Mountains

Roots of a mighty plane tree

Snail climbs up a plant stem

Portrait of a collared dove

Cormorant in its element

Dragonfly on a reed

Sunrise over the thermal gulf

Evening mood over the Aegean

Pelican in the light of the rising sun

Starlings on a barbed wire

A mystical light on a magical night

View over the Fossรก dale

The colored mountains of Landmannalaugar

Achim Dittrich's solo exhibition of photography "A Glimpse of Nature: From Greenland to Greece"

Govedarou Art Gallery, G. Papandreou 5 (formerly Antheon, Georgiou stop) is organizing the solo photography exhibition of the German photographer Achim Dittrich entitled "A Glimpse of Nature: From Greenland to Greece". In this exhibition you can see magnificent landscapes taken in Greenland, Germany, Iceland and Greece, as well as photos taken with the macrophotography technique. The opening of the exhibition will take place on Wednesday, February the 26th at 19.30 at the gallery and the duration will be until March the 14th 2020. In the framework of this solo photography exhibition there will be a presentation on Thursday, March the 5th, at 19.00 by Achim Dittrich of the Macrophotography Techniques. The audience will have the opportunity to chat and exchange ideas with the photographer. 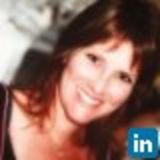