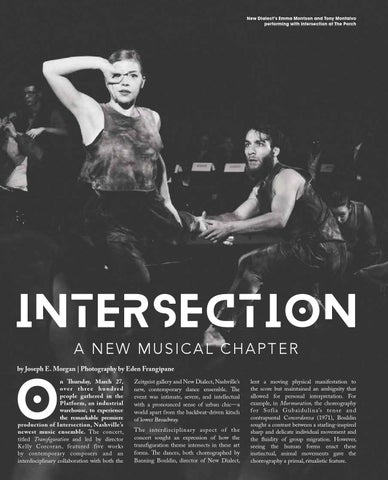 Zeitgeist gallery and New Dialect, Nashville’s new, contemporary dance ensemble. The event was intimate, severe, and intellectual with a pronounced sense of urban chic—a world apart from the backbeat-driven kitsch of lower Broadway. The interdisciplinar y aspect of the concert sought an expression of how the transfiguration theme intersects in these art forms. The dances, both choreographed by Banning Bouldin, director of New Dialect,

lent a moving physical manifestation to the score but maintained an ambiguity that allowed for personal interpretation. For example, in Murmuration, the choreography for S ofia Gubaidulina’s tense and contrapuntal Concordanza (1971), Bouldin sought a contrast between a starling-inspired sharp and delicate individual movement and the fluidity of group migration. However, seeing the human forms enact these instinctual, animal movements gave the choreography a primal, ritualistic feature.