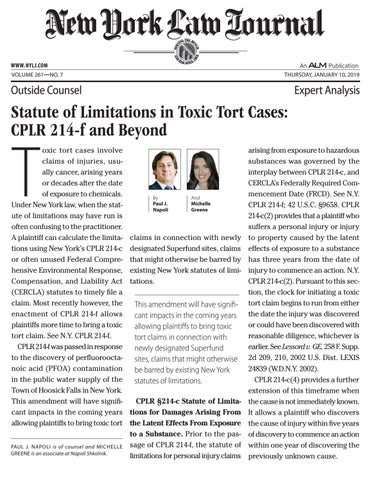 oxic tort cases involve claims of injuries, usually cancer, arising years or decades after the date of exposure to chemicals. Under New York law, when the statute of limitations may have run is often confusing to the practitioner. A plaintiff can calculate the limitations using New York’s CPLR 214-c or often unused Federal Comprehensive Environmental Response, Compensation, and Liability Act (CERCLA) statutes to timely file a claim. Most recently however, the enactment of CPLR 214-f allows plaintiffs more time to bring a toxic tort claim. See N.Y. CPLR 214-f. CPLR 214-f was passed in response to the discovery of perfluorooctanoic acid (PFOA) contamination in the public water supply of the Town of Hoosick Falls in New York. This amendment will have significant impacts in the coming years allowing plaintiffs to bring toxic tort

Paul J. Napoli is of counsel and Michelle Greene is an associate at Napoli Shkolnik.

claims in connection with newly designated Superfund sites, claims that might otherwise be barred by existing New York statutes of limitations.

This amendment will have significant impacts in the coming years allowing plaintiffs to bring toxic tort claims in connection with newly designated Superfund sites, claims that might otherwise be barred by existing New York statutes of limitations. CPLR §214-c Statute of Limitations for Damages Arising From the Latent Effects From Exposure to a Substance. Prior to the passage of CPLR 214-f, the statute of limitations for personal injury claims

arising from exposure to hazardous substances was governed by the interplay between CPLR 214-c, and CERCLA’s Federally Required Commencement Date (FRCD). See N.Y. CPLR 214-f; 42 U.S.C. §9658. CPLR 214-c(2) provides that a plaintiff who suffers a personal injury or injury to property caused by the latent effects of exposure to a substance has three years from the date of injury to commence an action. N.Y. CPLR 214-c(2). Pursuant to this section, the clock for initiating a toxic tort claim begins to run from either the date the injury was discovered or could have been discovered with reasonable diligence, whichever is earlier. See Lessord v. GE, 258 F. Supp. 2d 209, 210, 2002 U.S. Dist. LEXIS 24839 (W.D.N.Y. 2002). CPLR 214-c(4) provides a further extension of this timeframe when the cause is not immediately known. It allows a plaintiff who discovers the cause of injury within five years of discovery to commence an action within one year of discovering the previously unknown cause.

How the FRCD Preempts the State Law Accrual Date. The above statutory framework was fundamentally changed in 2002 when Congress enacted 42 U.S.C. §9658 as part of the amendments to CERCLA. CERCLA preempts state law by mandating the use of the FRCD in lieu of a state provided accrual date in situations where state law would use an earlier accrual date. See Freier v. Westinghouse Elec., 303 F.3d 176 (2d Cir. 2002). Under 42 U.S.C. §9658(B)(4)(a), the FRCD provides that the statute of limitations does not begin to run until a plaintiff knows of both the injury and the cause of the injury. As applied to the pre-existing New York state rule set forth in CPLR 214-c, a plaintiff has one year from the date of discovery of the cause of the injury to commence a lawsuit or three years from the date of discovery of the injury, if longer. This is true even if more than five years have elapsed since discovery of the injury. Id. at 210-11. Thus, if the FRCD is applied to CPLR §214-c, the statute of limitations for damages may be far longer than three years or even five years. 214-f Extends Statute of Limitations for Superfund Site Claims. The Hoosick Falls controversy began in November 2014, when contamination of the municipal water supply was discovered with elevated levels of PFOA in the municipal supply wells. The

defendant moved to dismiss the Complaint as time-barred on state statute of limitation grounds. Recognizing that existing statute of limitations CPLR 214-c would deny recourse to many plaintiffs, the Legislature added a new CPLR 214-f, which became effective on July 21, 2016, when New York Governor Andrew Cuomo signed into law Assembly Bill No. A09568A. The new statute amends the complex scheme of CPLR 214-c for personal injury claims. It gives individuals seeking damages for personal injuries caused by contact with or exposure to a substance or combination of substances within an area

As it stands now, CPLR 214-f can revive or extend a toxic tort claim many years past the original time limits provided by state and federal statutes of limitations. designated as a Superfund site the greater of the following periods: the limitations period of CPLR 214-c or within three years of the designation of the area as a Superfund site. See 42 U.S.C. §§9601 to 9675. Now, even if the plaintiff knew about contamination from a nearby source for years, the statute runs anew once the designation takes place. Note, however, that this rule, by its plain language, omits any mention of a claim for property damages. It is

important, therefore, to warn a client who has both types of claims that the latter is still subject to the pre-existing time limits. Sweener v. St.-Gobain Performance Plastics is the first reported decision interpreting CPLR 214-f. 2018 U.S. Dist. LEXIS 19893 (N.D.N.Y. Feb. 7, 2018). This lawsuit is one of numerous lawsuits before the court arising from the PFOA discovered in the groundwater in Hoosick Falls. It stated that the statute “was enacted to allow individuals such as [the p]laintiff, who suffer latent injuries stemming from environmental contamination, to pursue claims that would otherwise be time-barred simply because a defendant’s tortious conduct was unknown.” Id. at 8. It also found that “[a]llowing such plaintiffs three years after the designation of a Superfund site in which to bring their claims is plainly reasonable under New York law.” Id. The court in Wickenden v. SaintGobain Performance Plastics recently applied this statute, holding that the claims of Hoosick Falls residents were timely. 2018 U.S. Dist. LEXIS 103591, 15-16 (N.D.N.Y. June 21, 2018). In doing so, it rejected defendants’ argument that the provision revived otherwise timebarred claims in violation of their due process rights. Without this amendment, the statute of limitations would have long since run on many personal injury actions

before any contamination was ever discovered. Practical Implications of CPLR 214-f: The new amendment is farreaching, giving injured individuals an opportunity to bring actions that were previously time-barred while also expanding their range of claims. For example, it could be found to apply to companies that released substances such as petroleum products or other substances not covered by CERCLA. Another question to be resolved with respect to CPLR 214-f is whether a reclassification of an existing Superfund site would qualify as a designation for purposes of restarting the statute of limitations. For example, a site that was previously remediated and downgraded to a Class 4 or Class 3 site with no imminent risk of harm, may be re-tested for the presence of emerging contaminants and returned to the list of Class 2 sites, meaning that it “represents a significant threat to public health or the environment.” Shouldn’t plaintiffs, who previously had no reason to believe that they were facing a direct health threat, but now connect their illness to that site, have a chance to bring their claims to court? Given that the same concerns which led the legislature to address the problem in Hoosick Falls exist here, the statute should apply.

Claims Against a Municipality. In a personal injury action, a notice of claim must be served within 90 days of the incident causing the injury. See GML §50-i. An application for the extension to file a late notice of claim may be made after the commencement of the action, but not more than one year and 90 days after the cause of action accrued. Id. A determination of when to file a notice of claim is the same as for the statute of limitations under CPLR 214-c, discussed above. In fact, CPLR 214-c(3) expressly addresses claim accrual for purposes of sections 50-e and 50-i. This begs the question of whether this new CPLR 214f statute creates a new or supplemental accrual date for purposes of filing a notice of claim against a municipality, just like it does for regular defendants. While CPLR 214-f does not expressly mention the notice of claim provisions, its language is all-encompassing, expressly creating an alternative to CPLR 214c. We know CPLR 214-f revives claims that would be otherwise time-barred under CPLR 214-c. Presumably, there is no reason for a distinction between public and private entities. To state otherwise would essentially exclude municipal potentially responsible parties from liability under the law. Some Superfund sites, such as landfills,

parks, and military bases, are, in fact, owned by municipal or other governmental entities. As it stands now, CPLR 214-f can revive or extend a toxic tort claim many years past the original time limits provided by state and federal statutes of limitations. Since there is no legal precedent at this time, there is a colorable argument that it should also allow notices of claim within three years of the designation or, possibly, reclassification, of a Superfund site. If this premise is accepted, then all categories of defendants will be subject to potential new toxic tort claims created by this important amendment.

The enactment of CPLR 214-f allows plaintiffs more time to bring a toxic tort claim. This amendment will have significant impacts in the coming years allowing plaintiffs to bring toxic tort claims in connection with newly designated Superfund sites, claims that might otherwise be barred by existing New York statutes of limitations. 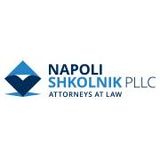