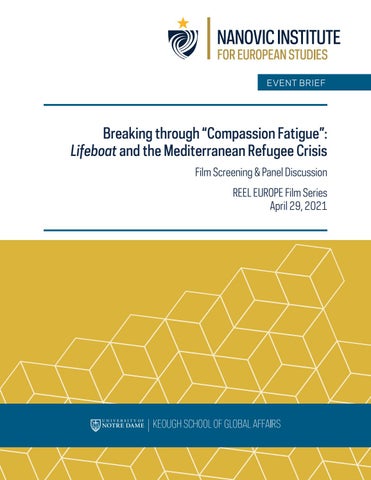 Breaking Through “Compassion Fatigue”: Lifeboat and the Mediterranean Refugee Crisis. BY ALEXANDER SHYNE ’22

On Thursday, April 29, the Nanovic Institute for European Studies hosted Oscar-nominated director Skye Fitzgerald for a screening of his 2018 short documentary, Lifeboat. This event was a joint endeavor between the Nanovic Institute for European Studies and the Initiative for Global Europe, Keough School of Global Affairs. It was also part of REEL EUROPE, Nanovic’s short film series that brings European documentaries to the Notre Dame community, in conversation with their directors. The event was held virtually, with a film screening and panel discussion moderated by William Collins Donahue, Rev. John J. Cavanaugh, C.S.C., Professor of the Humanities and director of the Initiative for Global Europe. Clemens Sedmak, interim director of the Nanovic Institute and professor of social ethics, opened the panel discussion. In his introduction, Sedmak touched upon one of the core ideas of the Keough School of International Affairs: integral human development. This concept focuses on the fundamental dignity of each human being, a theme that was prevalent in Lifeboat.

SCREENING The documentary focuses on a rescue mission conducted by the German volunteer organization Sea-Watch. The film begins bleakly, showing volunteers discovering the bodies of those who died in their attempt to cross the Mediterranean from Libya to southern Europe. It then shifts to the Sea-Watch vessel during a massive rescue operation involving several hundred refugees attempting to cross the Mediterranean on dinghies, with many of the passengers sick or dehydrated. The film illustrates the Herculean effort required to carry out such a rescue, with a special emphasis placed on the individual stories of several refugees as they share the hardships of their

journey, including horrifying experiences even before crossing the sea. The film ends with volunteers burying the body of one of the refugees who had died. The documentary is notable for the lack of overarching dialogue or explanations, which allows the viewer to focus on the humanity of the refugees and to witness their desperate and treacherous journey as they travel on the Mediterranean in search of asylum.

PANEL DISCUSSION Following the film screening, Donahue chaired a panel discussion with Lifeboat director Skye Fitzgerald, Elizabeth Ferris, research professor at the Institute for the Study of International Migration at Georgetown University, and Marie Naass, Head of Advocacy at Sea-Watch Germany & EU. The panel began with a question from Donahue regarding a quote by Fitzgerald that emphasized the importance of breaking through “compassion fatigue,” resulting in films that are narrow in subject matter and deep in their exploration of that topic. Donahue asked the director about the difficulties of creating films in this style. Fitzgerald reflected that his humanitarian film trilogy, which also includes 50 Feet from Syria (2015) and Hunger Ward (2020), presented neverending and varied challenges. Rather than tackling the crisis in Yemen broadly, Hunger Ward focuses on two workers within therapeutic feeding centers in the troubled country against the backdrop of war and famine. In choosing his subject matter for Lifeboat, Fitzgerald noted that 1% of the world’s population is made up of displaced people. This is a fact of such magnitude that he attempted to tackle this issue in both Hunger Ward and Lifeboat in order to humanize the plight of refugees attempting to sail across the Mediterranean. He is seeking to turn what could be just statistics into “something more visceral”; to put the audience into the place of the refugees, allow them to understand what the situation is like, and build empathy.

When asked by Donahue about what he had learned from making the film, Fitzgerald referred to the process of making documentaries as an example of how changes in vision occur during filming. Although he approaches production with a basic idea in mind, unexpected events and the process of filming often force Fitzgerald to reimagine the project entirely. For example, a Sea-Watch board member had agreed to lead the rescue mission that Skye’s crew would be filming. A linguist and a woman of color, she seemed like a good lens through which to view the subject matter. Following a forced rescheduling of the mission due to a pirate attack upon another nongovernmental organization (NGO) rescue vessel, the board member was no longer available leaving the film crew with no idea as to what their angle would be. They soon found a new focal point in John Castle, the captain of the ship. Castle worked as a commercial captain solely to fund his volunteer work, which included being one of the original Rainbow Warriors with Greenpeace. As a Quaker, Castle’s deeply held commitment to trying to improve the world inspired Fitzgerald to choose him as the new focus. Donahue asked Marie Naass for her opinion on how the film portrayed Sea-Watch, the organization that inspired this film. She found the film to be a touching and honest portrayal of working with Sea-Watch, one which made the group’s work tangible to those who cannot participate in the rescues. Due to the limited scope of the film, she noted that Lifeboat did not touch on how the EU illegally and actively tries to prevent people from seeking asylum. Sea-Watch was formed in response to the dissolution of Italy’s search and rescue organization, due to a lack of support from fellow EU member states. This Italian state rescue operation had been formed in 2013 as a response to the skyrocketing numbers of refugees fleeing after the Arab Spring and both the Syrian and Libyan crises. Civil society groups then filled the gap left by states that were seeking to avoid an influx of refugees. Originally, Sea-Watch had planned to exist only for a year, but since official governmental responses never improved, the organization continued its work. Sea-Watch has now been in existence for six years.

Donahue then turned to Elizabeth Ferris for more context on the refugee crisis in the Mediterranean. For her, films like Lifeboat show the anguish, fear, and anxiety that refugees experience. These images caused Ferris to immediately think about the policies that could have led to such a situation—most importantly, the lack of any legal pathways available for refugees to the EU that would force them to use more dangerous routes. Even when the smugglers bringing refugees across the Mediterranean are shut down, they forge more dangerous routes. The EU has begun working on methods to prevent refugees from ever reaching the border, such as the EU-Turkey Deal and the EU-Libya deal, but narrowing pathways force desperate actions leading to the rescue missions shown in Lifeboat. Although the EU-Libya deal promises that the EU is properly training the Libyan coast guard to intercept refugee’s vessels, Naass pointed out that there is no legitimate Libyan coast guard. To illustrate, Fitzgerald commented on an experience that occurred on a Sea-Watch mission following the one featured in the film. The Libyan coast guard forced the Sea-Watch ship back at gunpoint, leaving the crew helpless as they watched them board the refugee vessel to steal the outboard engines, condemning those on board to death. Sea-Watch volunteers have witnessed frequent human rights violations by the Libyan authorities, including some instances of human trafficking where refugees are taken to Libya and forced into servitude or other inhumane situations.

STUDENT Q&A Following this discussion, the panel answered questions from Notre Dame students and audience members. Michelle Moufawad ’21 asked Naass how Sea-Watch works with NGOs when a ship arrives at European ports with refugees. Sea-Watch is in constant contact with these groups to find a safe port for the refugees, but the process has become complex. Representatives from individual European countries arrive at the refugee camps and select which refugees they will admit. In some cases, member states will attempt to take in people with a low likelihood of gaining asylum, so that the refugees can be deported after their application is rejected. Sea-Watch gathers information on the number of immediate rejections of asylum seekers. Nanovic Institute for European Studies | Keough School of Global Affairs | University of Notre Dame

Mary Gorski ’21 asked Fitzgerald about his decision to give priority to the human focus, rather than political themes or context. Fitzgerald noted that the words “refugee” and “asylum seeker” were already politically charged, and would only become more divisive as times change. He wanted to avoid creating a film that would no longer be relevant as the political landscape shifted. By focusing on the humanitarian principles of the situation, Fitzgerald hopes that the film will be able to withstand the test of time. Until politics shift to this core humanitarian focus as well, things will only get worse.

AUDIENCE Q&A The event wrapped up with a lively discussion in response to questions from audience members. When asked about the pushback Sea-Watch had received from EU member states, Naass discussed stand-offs that occurred as European ports refused to accept refugees, as well as Sea-Watch fighting legal efforts to decommission their rescue ships. Fitzgerald provided a fascinating response to the question of how he blends aesthetics with a humanitarian focus, explaining that he uses editing and cinematography in order to create visual questions that will stick with the viewer. These questions, he hopes, compel the viewer to research the issue further, and advocate for change. Dialogue is minimal within the film, as he attempts to treat the viewers as intelligent enough to not need an abundance of commentary. By doing this, he only needs to provide enough context so that the scene can make sense. As for what could come next, Fitzgerald said he remains very invested in the current subject. As the dysfunction and corruption surrounding refugee care continue in Libya, the practice differs in Yemen, where refugees are being held hostage for ransom payments from their family members. Unless the situation is truly resolved and not avoided, he fears that the problem will replicate itself over and over again.

Alexander Shyne ’22 is a Mechanical Engineering student minoring in European Studies. He has been involved with a number of Institute projects and events including the Humanities and Policy research project, and two Institute-sponsored seminars in Berlin. For more than fifteen years, the Nanovic Institute for European Studies has run a short film series bringing European cinema to Notre Dame. REEL EUROPE, our series for spring 2021, focused on cinematic storytelling through European documentaries. The film series is run in partnership with the DeBartolo Performing Arts Center. Please visit our website to find out more about the series and to join our mailing list for news of upcoming screenings. 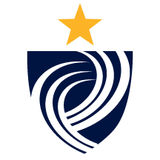 On Thursday, April 29, the Nanovic Institute for European Studies hosted Oscar-nominated director Skye Fitzgerald for a screening of his 201...

On Thursday, April 29, the Nanovic Institute for European Studies hosted Oscar-nominated director Skye Fitzgerald for a screening of his 201...