THE ATLAS OF FOOD 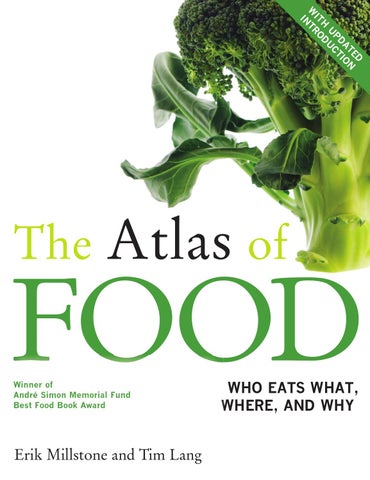 WHO EATS WHAT, WHERE, AND WHY

Erik Millstone is a Professor of Science Policy at the University of Sussex, UK. He has been working on foodrelated issues since the mid-1970s and is the author of Food Additives; Additives: A Guide for Everyone; Our Genetic Future; Lead and Public Health and BSE: Risk, Science and Governance, as well as numerous journal and magazine articles on the politics of food and health. He is currently working on a project concerned with reconciling improved food production for poor farmers in developing countries with poverty reduction and environmental sustainability, as part of the STEPs centre (steps-centre.org). Tim Lang is Professor of Food Policy at City University’s Centre for Food Policy in London. He studies how policy affects the shape of the food supply chain, what people eat, and the societal, health, and environmental outcomes. He is a Vice-President of the Chartered Institute of Environmental Health and a regular consultant to governmental and non-governmental public bodies. In 2006–11, he was Land Use and Natural Resources Commissioner on the UK Government’s Sustainable Development Commission. He is co-author of Ecological Public Health (2012), Food Policy (2009), Food Wars (2004), and The Unmanageable Consumer (1996).

In the same series: “Unique and uniquely beautiful.... A single map here tells us more about the world today than a dozen abstracts or scholarly tomes.” Los Angeles Times “A striking new approach to cartography.... No-one wishing to keep a grip on the reality of the world should be without these books.” International Herald Tribune

Who Eats What, Where, and Why

With an Updated Introduction

University of California Press, one of the most distinguished university presses in the United States, enriches lives around the world by advancing scholarship in the humanities, social sciences, and natural sciences. Its activities are supported by the UC Press Foundation and by philanthropic contributions from individuals and institutions. For more information, visit www.ucpress.edu. University of California Press Berkeley and Los Angeles, California Copyright ÂŠ Myriad Editions Limited 2003, 2008, 2013 All rights reserved Cataloging-in-publication data for this title is on file with the Library of Congress. ISBN: 978-0-520-276420 Produced for the University of California Press by Myriad Editions Brighton, UK www.MyriadEditions.com Edited and co-ordinated by Jannet King and Candida Lacey Designed by Isabelle Lewis and Corinne Pearlman Maps and graphics created by Isabelle Lewis

Printed on paper produced from sustainable sources. Printed and bound in Hong Kong through Lion Production under the supervision of Bob Cassels, The Hanway Press, London.

This book is sold subject to the condition that it shall not by way of trade or otherwise, be lent, re-sold, hired out, or otherwise circulated without the publisherâ&amp;#x20AC;&amp;#x2122;s prior consent in any form of binding or cover other than that in which it is published and without a similar condition including this condition being imposed on the subsequent purchaser.

e live at a time when issues about how food is produced, marketed, and consumed are matters of unprecedented personal as well as public interest. And why not? Food influences the lives of every person on Earth. On the personal side, everyone eats, and what we eat – in quantity and quality – greatly affects our health. On the public side, food has extraordinary economic importance. In the United States alone, the food industry encompasses about 2 million farms and nearly 600,000 food processing, wholesale, retail, and service companies. Together, these components of the nation’s food system generate more than a trillion dollars in sales each year, account for about 12 percent of the Gross National Product, and employ about 17 percent of the workforce. Anything this big deserves serious attention on its own, but the US food industry does not exist in isolation. We imported about $80 billion worth of agricultural products and seafood in 2007, and we exported nearly as much. The American food system is inextricably linked to the global food economy. The interconnectedness of the world’s food systems can be illustrated by matters as seemingly diverse as the pet food recalls of 2007 and by rising food prices. The pet food incident began with a few sick cats but soon developed into an international crisis in food safety and trade relations. Toxic ingredients had been produced in China, shipped to the United States and Canada, incorporated into hundreds of brands of pet foods, and recycled into feed for pigs, chickens, and fish intended for the human food supply. Some of the adulterated food and feed was exported to countries abroad. Today’s national and international food systems are so interwoven that food intended for pets, farm animals, or people cannot be kept separate. A problem with food in one country must be expected to have international repercussions. The recent rise in food prices also has profound global dimensions. Its multiple causes may appear many steps removed from supermarket shopping carts: increasing demands for meat and cooking oils among populations in developing countries and, therefore, for feed grains and oil seeds; Middle East conflicts leading to reductions in the supply of fuel oil, thereby increasing the costs of fertilizer and transportation; and American incentives for Midwestern farmers to grow corn to produce ethanol rather than feed. Throughout history, food shortages have threatened the stability of governments. Today, they pose a threat to world security. These interconnections are complex and the “big picture” is often hard to fathom. That is why The Atlas of Food is such an invaluable resource. Here, in one place, beautifully illustrated, is the global food system available to anyone at the mere turn of a page. The Atlas maps provide rich material. Millstone, Lang and colleagues make the prodigious amount of research that went into creating them look easy. The maps tell the story at a glance. This Atlas is a generous gift to the world community of people who care about food in any of its dimensions, from farming to advocacy. We owe it a great round of applause. Marion Nestle Paulette Goddard Professor of Nutrition, Food Studies, and Public Health at New York University and author of Food Politics, Safe Food, and What to Eat.

Global advertising budget for food in 2001:

HEALTHY LIFESTYLE CHOICES depend on factors such as price, availability and adequate information about products, as well personal preference and cultural values. The promotional activities undertaken by food and beverage companies can influence all these factors. The global advertising budget for food products in 2001 was estimated to be around $40 billion – more than the national economies of two-thirds of the world’s nations. Several studies have indicated that food advertising and marketing is associated with more favourable attitudes, preferences and behaviours among children towards the advertised products. Even a 30-second exposure to an advertisement can significantly influence the food preferences made by children as young as two years old. Children in the developing world may be especially vulnerable to food promotion because they are less familiar with advertising. They are considered by Western firms as a key “entry point” to new markets because they are more flexible and responsive than their parents, and because they associate Western brands with desirable life-styles.

New forms of advertising are increasingly being employed that bypass parental control and target children directly. These include internet promotion (using interactive games, free downloads, blogs and chatterbots), SMS texting to children’s cell phones, product promotions in schools and pre-schools, and brand advertising in educational materials. New forms of advertising are occurring in public areas: such as on-screen advertising in public transport and interactive electronic hoardings. The most frequently advertised foods are confectionery, sweetened breakfast cereals and meals from fast-food outlets. There is a huge disparity between the proportion of advertisements that promote foods high in fats, sugar and salt, and the proportion of our diet these foods are supposed to represent. The intensive marketing of energy-dense, nutrient-poor foods undermines healthy lifestyle choices. Consumer organizations have called for stronger regulation of advertising to children, and have voiced concerns that voluntary or self-regulatory controls will not be effective. In

response to rising concern among consumers and health professionals, and to its own report on diet and the prevention of chronic disease, the World Health Organization produced a report, endorsed by the World Health Assembly in 2004, that set out a global strategy on diet, physical activity and health. This clearly states that food advertising influences dietary habits, and that messages encouraging unhealthy dietary practices or physical inactivity should

therefore be discouraged, with positive health messages encouraged. It urges governments to work to address the marketing of food to children and deal with such issues as sponsorship, promotion and advertising. As of the end of 2008, advertising of junk food has been banned in the UK around children’s TV programmes in an attempt to combat an increase in childhood obesity rates.

C ITIZENS B ITE B ACK FOOD AND WATER are vital ingredients for life. It is little wonder, then, that access to safe, nutritious food has become a political issue worldwide. The production, distribution and retailing of food is, in many countries, controlled by large corporations. Yet, consumers of that food – and the people most closely involved in producing, transporting, serving, selling and inspecting it – have also found a voice, and have formed large umbrella groups that link affiliated organizations around the world. Many different food issues are the focus of sustained campaigns, which include identifying causes of contamination in food and water, and improving access to safe sources of both, supporting breastfeeding mothers in developing countries, improving animal welfare, highlighting the environmental impacts of unsustainable farming, protecting the health, safety, wages and conditions of food workers, improving food labelling, and counteracting the advertising of unhealthy food and drink.

IN D I A SENEGAL

City dwellers in developing countries are heavily dependent on food bought from street traders. Consumers International is campaigning to preserve its diversity, and improve its safety.

The pillars of food sovereignty In 2007, more than 500 people from 80 countries met in Nyéléni, Mali to strengthen the global movement for food sovereignty. They represented family farmers, fisherfolk and urban dwellers, forest, indigenous and landless peoples, and consumer and environmental organizations. They identified six key pillars upon which food sovereignty could be built: 1 Food is primarily a right, not a commodity. 2 The people who produce it should be respected. 3 Food systems should be as localized as possible. 4 Local resources should be controlled by local people. 5 Knowledge and skills should be supported. 6 Nature should be worked with, not against.

“An extraordinarily clear basis for understanding the underlying issues.” Ecologist “A unique and easily accessible insight into the way our world food system works. This splendid presentation of deeply worrying data and trends should be a wake-up call.” Times Higher Education Supplement This award-winning atlas maps every link of the food chain, from farming, production and retail to the food on our plates. It also investigates how, in an era of new technologies, globalized food trade and even plentiful supply, millions remain hungry. Topics include: prices and shortages • malnutrition • dietary changes and increasing obesity • climate change impacts • industrial farming • live animal trade • GM crops • fertilizers and pesticides • organic farming • land rights • trade justice • fast food and additives

“Impressive and far-ranging, an extremely useful and comprehensive, if disturbing, read.” Financial Times

THE ATLAS OF FOOD

This award-winning atlas maps every link of the food chain, from farming, production and retail to the food on our plates. It also investigates how, in an era of new technologies, globalized food trade and even plentiful supply, millions remain hungry. 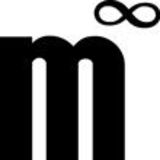