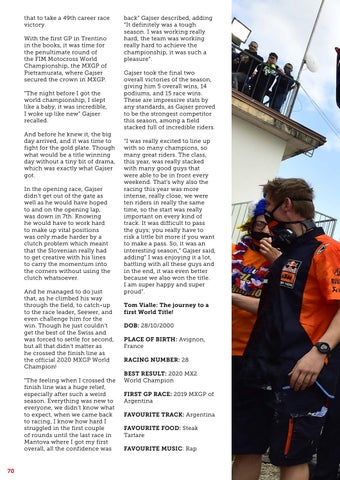 that to take a 49th career race victory. With the first GP in Trentino in the books, it was time for the penultimate round of the FIM Motocross World Championship, the MXGP of Pietramurata, where Gajser secured the crown in MXGP. “The night before I got the world championship, I slept like a baby, it was incredible, I woke up like new” Gajser recalled. And before he knew it, the big day arrived, and it was time to fight for the gold plate. Though what would be a title winning day without a tiny bit of drama, which was exactly what Gajser got. In the opening race, Gajser didn’t get out of the gate as well as he would have hoped to and on the opening lap, was down in 7th. Knowing he would have to work hard to make up vital positions was only made harder by a clutch problem which meant that the Slovenian really had to get creative with his lines to carry the momentum into the corners without using the clutch whatsoever. And he managed to do just that, as he climbed his way through the field, to catch-up to the race leader, Seewer, and even challenge him for the win. Though he just couldn’t get the best of the Swiss and was forced to settle for second, but all that didn’t matter as he crossed the finish line as the official 2020 MXGP World Champion! “The feeling when I crossed the finish line was a huge relief, especially after such a weird season. Everything was new to everyone, we didn’t know what to expect, when we came back to racing, I know how hard I struggled in the first couple of rounds until the last race in Mantova where I got my first overall, all the confidence was

back” Gajser described, adding “It definitely was a tough season. I was working really hard, the team was working really hard to achieve the championship, it was such a pleasure”. Gajser took the final two overall victories of the season, giving him 5 overall wins, 14 podiums, and 15 race wins. These are impressive stats by any standards, as Gajser proved to be the strongest competitor this season, among a field stacked full of incredible riders. “I was really excited to line up with so many champions, so many great riders. The class, this year, was really stacked with many good guys that were able to be in front every weekend. That’s why also the racing this year was more intense, really close, we were ten riders in really the same time, so the start was really important on every kind of track. It was difficult to pass the guys; you really have to risk a little bit more if you want to make a pass. So, it was an interesting season,” Gajser said, adding” I was enjoying it a lot, battling with all these guys and in the end, it was even better because we also won the title. I am super happy and super proud”. Tom Vialle: The journey to a first World Title! DOB: 28/10/2000 PLACE OF BIRTH: Avignon, France RACING NUMBER: 28 BEST RESULT: 2020 MX2 World Champion FIRST GP RACE: 2019 MXGP of Argentina FAVOURITE TRACK: Argentina FAVOURITE FOOD: Steak Tartare FAVOURITE MUSIC: Rap 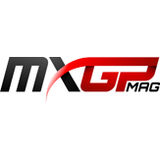 Infront Moto Racing is excited to share that you can now check out the 88th issue of the MXGP Magazine! The monthly online magazine featur...

Infront Moto Racing is excited to share that you can now check out the 88th issue of the MXGP Magazine! The monthly online magazine featur...