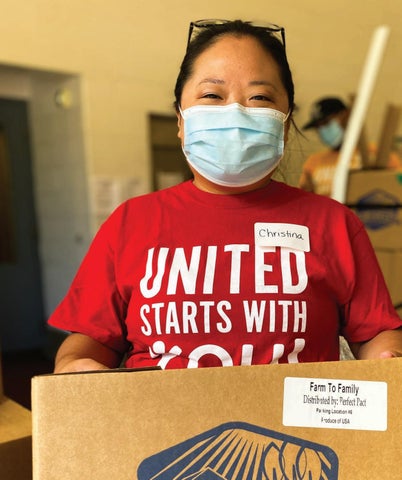 DEAR FRIENDS, 2020 was a tough year for us all. It was a year of strife and adversity. A year of challenges and opportunities. While our day to day lives looked very different, our focus remained unwavering: to serve the people of our community. Seemingly overnight we were tested in flexibility, having to shift the entire office to a virtual setting, all without letting this change negatively impact our ability to help. Our front line partners were facing unprecedented challenges, and we found new ways to help, including by providing them with much needed PPE. We started by assessing the needs of our community, and coordinated fundraising and disbursement to provide direct financial support to families struggling to have their basic needs met. This year demonstrated cooperation like we have never seen before with neighbors, friends and colleagues. As you pour over the pages of this yearâ&amp;#x20AC;&amp;#x2122;s Annual Report, we hope you will take the time to appreciate our community and what we represent from the generosity of our donors, the strength and resilience of our volunteers, the compassion of our partner agencies and the leadership of our corporate partners.

OUR MISSION By cultivating leadership and partnerships, bringing resources together, and investing in our community, Middlesex United Way acts as a catalyst to achieve measurable, positive impact in education, health, housing, financial stability and racial equity and inclusion. Middlesex United Way envisions a community where students succeed academically, individuals &amp; families are healthy and safe &amp; youth and adults avoid risky behaviors, have safe &amp; affordable housing, are economically stable, and a community that is anti-racist, equitable, and inclusive.

LIFTING OUR COMMUNITY UP MIDDLESEX UNITED WAY COVID-19 RESPONSE The COVID-19 pandemic created a crisis within our community. Individuals and families faced new challenges they weren’t properly prepared for, and residents who were already struggling found themselves with an even greater battle. During COVID-19, Middlesex United Way immediately took action and led a response that provided support to local agencies on the front lines of the need, as well as provided support directly to local families and people who were struggling to have their basic needs met due to the direct impact of this pandemic.

PROVIDED BASIC NEEDS TO COMMUNITY MEMBERS TOGETHER IS BETTER THAN ONE

Middlesex United Way joined forces with United Ways across the state to establish the Connecticut United Ways COVID-19 Response Fund. To date, we have helped more than 130 Middlesex County households using this fund, providing over $26,000 in financial support. In total over $800,000 has gone directly to over 5,000 households throughout the state.

MASKS TO THE COMMUNITY

PROTECTION FOR ALL THROUGHOUT MIDDLESEX COUNTY We rallied volunteers throughout Middlesex County to provide over 50,000 masks to individuals and families, first responders, nonprofits and essential workers.

ACHIEVEMENTS EVEN IN THE DARKNESS OF COVID Distributed over 7,000 boxes of food, totaling over 80,000 pounds of fresh produce, to families in need in Middlesex County.

STAYING CONNECTED THROUGHOUT THE PANDEMIC

We created opportunities for volunteers to support our community partners. Over 100 cards were written to nursing home staff and residents and over two hours of children’s books were read by volunteers.

Middlesex United Way set up the 2020 ALICE Fund to provide hyperlocal financial support to those severely impacted by the COVID-19 pandemic. To date, we have raised over $30,000, assisting 73 families with critical needs like food, utilities, and housing. PA G E 7

THANK YOU SO VERY MUCH AS I WAS AT A LOSS ON HOW I WAS GOING TO PAY LAST MONTH’S MORTGAGE AS I HAD NOT BEEN RECEIVING ANY OF MY UNEMPLOYMENT.

OUR WORK THROUGH A NEW LENS

Our vision is that individuals and families live in a thriving, healthy &amp; vibrant community that is anti-racist, equitable, &amp; inclusive.

We are focused on systematic change and vow to continue our work in making sure all people thrive in the communities we serve. At Middlesex United Way, we believe that to achieve racial equity, we must unite and commit to playing a role to take real action. Historically, Middlesex United Way has believed in and valued inclusivity, as everybody needs representation when it comes to tackling the issues our community faces. In recognition of the importance of racial equity and inclusion, the Middlesex United Way board voted unanimously to add these values as their own focus area. We are a community made up of individuals that come from all different backgrounds and have different experiences, abilities, and most importantly- different perspectives. In order for everyone in our community to succeed, we must enrich and strengthen the quality of our work, commitment to our community and nonprofit partners and to building an anti-racist, inclusive future. This summer, we formed two new committees made up of board members, community leaders, nonprofit partners and other residents to accelerate our work. Our Young Leaders Society hosted their first equity event â&amp;#x20AC;&amp;#x153;Elevating Black Voices: A Virtual Conversation on Racial Equity, Inclusion, and Opportunities for Collaborative Change in Middlesex County,â&amp;#x20AC;? which provided attendees the opportunity to listen to local Black leaders as they shared their perspectives and helped identify issues on racial inequity, systemic racism, racial injustice and racial exclusion in Middlesex County, along with discussed how each panelist is helping to address these needs in our community. We featured a series in the Middletown Press called Elevating Black Voices, where we asked community members to share their experiences in a weekly column that is generously allocated to us by the paper. This is just the start of our work and we will continue to use our resources and voice to amplify the needs of our entire community.

REPORT OF THE NOMINATING COMMITTEE OFFICERS

OUR NEW BOARD MEMBERS “I&#39;ve watched the United Way change the lives of many in our community, so now I want to see what I can do to help.” Robert Badin is a long term Jet Engine Assembler at Pratt &amp; Whitney. Badin attended Middlesex Community College and has been a long-standing United Way supporter who has been actively involved in the employee campaign at Pratt &amp; Whitney. He currently lives in Rockfall, CT with his wife Joanne and two daughters, Melanie, 26 and Lauren, 22.

“Much of what draws me toward service are the relationships that are built along the way.” Joshua Rivera is an aspiring Realtor in Moodus, CT. Rivera holds a bachelor’s degree from Central Connecticut State University (CCSU) in Business Management . He is a passionate Morale and Teambuilding coach. Rivera was awarded the top student in the school of business at CCSU and was a member of the Beta Gamma Sigma Honor Society and Phi Theta Kappa Honor Society.

“Middlesex United Way is comprised of individuals that embody their company values and these are values that I also hold dear.” Gary Wallace is the current Director of Community Engagement &amp; Relations at Community Health Center. Wallace holds a bachelor’s degree from Charter Oak State College in Individualized Studies. He is a US Navy Veteran and recently retired as a Captain from the Middletown Police Department. He is the recent recipient of Proclamation from the Honorable Lt. Governor Susan Bysiewitz and Middletown Mayor Ben Florshiem. He has three children: Anissia (26), Kaidence (7), Greyson (3) and engaged to Karina Marrinan.

OUR FUNDED PARTNERS Last year, the Middlesex United Way invested over $600,000 in the community. More than 20,523 children and adults in Middlesex County benefited from programs and services provided by our 38 partners.

Middlesex United Way invests in kindergarten readiness, family literacy and parent education to ensure children are ready to learn by school entry and are reading at grade level by the end of 3rd grade. With our partners, we are working to expand access to quality early childhood education, improve literacy rates and prepare more high school students for college and a career.

The entire community benefits when individuals and families are financially stable. We work with partners who provide basic needs as well as employment training supports and services like job training, coaching and free tax preparation. With these vital programs, we are helping individuals learn new skills, increase their current wages and keep and grow more of what they earn.

OUR FINANCIALS Middlesex United Way takes its responsibility as a steward of donor contributions very seriously. United Way&#39;s board of directors, staff and other professional volunteers with expertise in financial management and governance have established fiscal controls to ensure the highest level of accountability and transparency in United Way&#39;s operations. 2020/2021 TOTALS EDUCATION

DISTRIBUTIONS TO AGENCIES AND UNITED WAYS

AMOUNTS DISTRIBUTED BY OTHERS

JEAN D’AQUILA The 2020 recipient of the Community Service Award is Jean D’Aquila. D’Aquila’s involvement with Middlesex United Way began in 2007 when she joined our board of directors, where she served on our nominating committee, as well as the major gifts committee. Since then, she has served in many capacities for Middlesex United Way, including as the Women’s Initiative’s chairwoman. She has been involved with many Middlesex United Way funding partners including MARC Community Resources, Northern Middlesex Habitat for Humanity, and Literacy Volunteers of Greater Middletown.

I AM VERY HONORED TO RECEIVE THIS RECOGNITION FROM AN AGENCY I SO ADMIRE AND TRUST TO DO THE RIGHT THINGS WITHIN OUR COMMUNITY.

2016 The Coalition for Housing and Homelessness 2017 The Connection, Inc. 2018 Columbus House 2019 Child and Family Agency of Southeastern Connecticut

STAY CONNECTED WITH US!