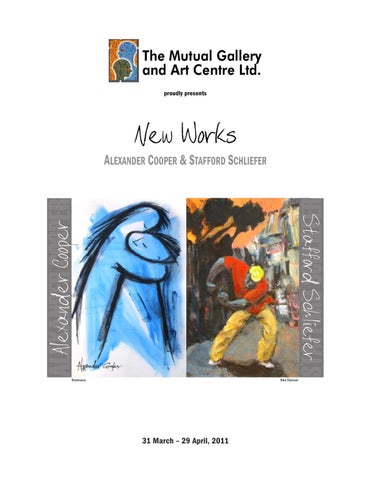 Stafford Schliefer Stafford Schliefer, self-taught artist, born in Kingston, Jamaica in 1939, has been painting professionally since the age of 28. When asked what motivated him to paint, Schliefer simply says that painting was like breathing for him. His career began humbly, by exhibiting his art on the hotel strips in Kingston and Montego Bay. The recognition from art critics allowed his work to move off the streets and into the art galleries and museums. Early in his career, Schliefer received two Certificates of Merit from the Jamaica Festival Arts Commission in 1970 and 1972 and a High Commendation Award from the Institute of Jamaica in 1971. His first solo art show was in 1971. Schliefer&#39;s art has been thematically mixed from the outset, including both figurative and abstract expressionist work. His paintings encompass a wide range of subjects, including erotica, Jamaican cultural traditions, and socio-political themes, executed in acrylics, oils, watercolour, mixed-media collage, and drawings. His paintings articulate a distinctive expressionist style. They are often energetically characterized by exuberant use of colour and motion with gestural brushwork. His depictions of Jamaican pocomania ceremonies, Jonkunnu masquerades, and sugarcane workers in the field are examples of this. A substantial part of Schliefer&#39;s art reflects issues relevant to the conditions of poverty and violence in the society, expressing his personal confrontation with same, in visual terms. Schliefer is currently living and working in Irish Town, Jamaica. Main Exhibitions and Awards Since his first exhibition in 1969 at the Jamaica Festival of Fine Arts, Schliefer has exhibited and internationally, and in group and solo exhibitions in Canada, the United States, Germany, and Jamaica. His work has been in the Annual National Exhibition at the National Gallery of Jamaica consistently since its inception in 1984, and in the National Biennial Exhibition, held since 2002. His solo exhibits include annual shows at the Mutual Life Gallery in Kingston, Jamaica between 1983-2000, a 1989 show at the Contemporary Artists&#39; Association in Kingston, and two shows in 1978 and 1981 at the Mohave Museum of History and Art, in Kingman, Arizona. His latest show was &#39;New Work by the Masters: Alexander Cooper and Stafford Schliefer&#39;, held at the Mutual Gallery &amp; Art Centre in Kingston, Jamaica, 31 March-29 April 2012. His participation in international group exhibits includes the 1995-98 exhibit &#39;Caribbean Visions&#39; which toured the USA; the 1976 United States Postal Service Bicentennial Art Contest (Second Place), held in Phoenix, Arizona, USA; and â&amp;#x20AC;&amp;#x2DC;Three decades of Jamaican painting&#39; staged at the Commonwealth Institute Art Gallery in London in 1971. He was invited to represent the US in the 2nd World Black &amp; African Festival of Art &amp; Culture which was to be held in Nigeria in 1976. Over the years, various Jamaican Prime Ministers have selected his work as official gifts to the late Pope John Paul, former Japanese Prime Minister Keizo Obuchi, US President Bill Clinton and South African President Nelson Mandela. Schliefer is listed in several biographies and art works, such as &#39;Who&#39;s Who in American Art&#39; (1976 edition), &#39;Personalities of the West and the Mid-West&#39; (1977-78 edition), &#39;American Artists of Renown&#39; (1981-82 edition), &#39;Men of Achievement&#39;, &#39;Dictionary of International Biography&#39; (Volume 15), &#39;International Who&#39;s Who in Community Service&#39;, &#39;Caribbean Visions: Contemporary Painting and Sculpture&#39; (1995), &#39;Modern Jamaican Art&#39; (1998). Important collections such as The John Deare Art Collection, one of the Vatican&#39;s 23 Papal Art Collections, The National Gallery of Jamaica, The Bank of Jamaica, the estate of the Right Hon. Michael Manley (former Prime Minister of Jamaica), as well as those of private and institutional collectors in Jamaica and elsewhere, bear examples of his work.

Where Are The Men