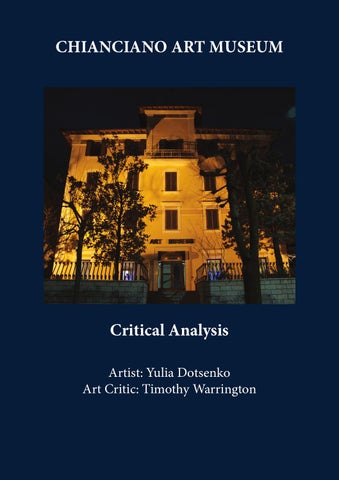 The Museum The Museum of Art of Chianciano hosts a series of collections ranging from Neolithic and Asiatic to Contemporary art. There are approximately a thousand works on display. Visitors are able to view paintings and sculptures by artists such as Tom Nash, Salvador Dali, Sir Henry Moore, Frances Turner, Mario Schifano, Damien Hirst, Brian Willsher and Albert Louden, drawings by the likes of Magritte, Guttuso and Munch; historical works from Royal Collections and original etchings by masters such as Dürer and Rembrandt. The museum is known for organising annual international events, including the Chianciano International Art Award and the Biennale of Chianciano.

The Critic Timothy Warrington was born in Birmingham in 1944 and is a critical writer and curator based in London. Warrington’s career has taken him all around the world in the search for art to exhibit in London. He was part of the organisation that hosted the largest and most important exposition of Bulgarian art ever curated outside Bulgaria, showing 300 artists. The exhibition was hosted in collaboration with the Bulgarian Embassy in London and was inaugurated by the Bulgarian Ambassador Mr Stancoff. The Slovenian Printmakers Exhibition was another reminder of the wonderful talent that Timothy brought to London, artists that are recognised and respected all around the world. “Italian Views” at the Lord Leighton Museum, curated by Timothy, was also a great success and a spotlight into contemporary Italian Art from institutions such as the Academy of Fine Art in Florence, Academy of Fiorino in Florence and The Academy of Fine Art in Rome. Warrington has curated numerous books and writes opinions and exhibition critiques in the UK and the USA. Notably, he was responsible for the main publication related to Brian Willsher’s Bronzes, an artist who taught at the Tate and was praised by Sir Henry Moore as an artistic genius. Timothy’s critical writing is very sophisticated - he has the power to translate the artist’s thoughts to the viewer with extreme clarity and competence. He was a member of the jury of Chianciano International Art Award alongside people like Gerard Bruneau who started his career wih Andy Warhol.

The throne of Zeus at dawn by Yulia Vasilievna Dotsenko

The Artist Yulia Dotsenko is a Russian artist, photographer and environmental designer. Born in the German town of Jena, Dotsenko’s life was influenced by art from her youth. A prodigy with limitless talent and a magnificent creative force, at the age of seven, she attended a Ukrainian school of arts, studying a range of artistic disciplines from theatre to dance and on moving to Moscow, she undertook private painting lessons with the renowned artist, Ekaterina Yazidjian from the Russian Union of Artists. Dotsenko subsequently attended the Moscow Academy of Natalia Nesterova, graduating as the highest achiever for her thesis. She has been selected for numerous group exhibitions as well as architectural projects in recent years ultimately finding her calling in visual and conceptual art. In 2011, she won the International Concept Competition ‘Space and the Future of Humanity’ and her work is exhibited from Moscow to London and internationally. The origins of Dotsenko’s expressive journey began as a child who embraced creativity and discovered the power of art. At the age of four she stumbled across the magnificence of Raphael’s’ Sistine Madonna at the Old Masters’ Gallery and never looked back. Its awe-inspiring impact was the spark that led to her belief that the use of the imagination during creation is the most divine state one can achieve. Communicating through art, she believes, is not only an action but a form of higher consciousness. Dotsenko’s open mind and broad education have allowed her to embrace intellectual stimuli of all forms. She views science and art as twin entities in her intellectual journey and her art took on a scientific dimension when collaborating with architect Oleg Fokin in working on environmental design projects. Dotsenko’s technical ability can be seen through her architectural studies and engineering designs and she has also broadened her horizons to photography and film art. Dotsenko’s combination of visual and aural stimuli in art can be experienced in works such ‘Multidimensional Sounds of Space’. Again, Dotsenko adds a uniquely spiritual dimension to her art; leaving viewers and listeners unable to escape from the mystical quality she radiates into her work. Since 2012, Yulia has travelled to Greece and was inspired by the unique nature of the country and its great history. She climbed Mount Olympus in the winter, and did so on several other occasions. In 2014 she participated in the filming of the documentary “OLYMPUS Four Paths to Reach the Gods” Directed by Nikolaos Ntourlios. These journeys and experiences were a strong influence on Dotsenko’s work and have led to some of her most interesting creations.

The Critique Dotsenko’s artistic creativity is a complex fusion of ideas and influences combined with an innate creative yet analytical cognitive presence. Curious by nature, Yulia Vasilievna Dotsenko is an explorer who travels the world to discover the diversity of its forms. Artistically, Dotsenko’s works are unique in their ability to absorb and reflect the endless elements that encompass the mysterious yet wonderful puzzle that is Dotsenko’s art. Her distinctive works, depicting landscapes, still life and architectural studies have an ethereal, mystical quality communicated through her carefully chosen palette of natural, earthy tones and soft pastel. Her renderings of hazy sunsets and serene starlit skies convey a highly spiritual dimension as Dotsenko strives not just to capture the compositions but also share her personal impressions of them. We recognise a discovery of the landscape that has been explored before by some romantic painters of the 19th Century such as Caspar David Friedrich or, later, the Impressionists. Her contemporary style does in fact combine influences from Impressionism and techniques of Divisionism with softer, subtler tones, balmy light and added emotional integrity. Viewers encounter the traditional form that the artworks take, finding themselves thrown into the neverending horizons reminiscent of Monet, juxtaposed with Seurat’s vivid contrasts. It is clear that Dotsenko views the process of creation as a personal and philosophical venture and an ongoing journey of exploration. An endless meander into her soul that tells tales of a wonderful childhood surrounded by nature, embracing its beauty and studying the variety of sensations capable of capture. A love for harmony that eloquently conveys her transdimensional relationship with the forests, rivers and hills. Dotsenko is undoubtedly and intimately bound to nature’s offerings while visibly inquisitive as well as sensitive in her ability to search for light and the atmosphere of a precise time of day that can be defined as the “decisive moment”. Dotsenko explores different media to translate the emotive energy that is infused within her and while remaining faithful to reality, she gives us poetic interpretations. She indeed reminds us, as David Hockney once said, “You can’t be tired of nature. It is just our way of looking at it that we are tired of.” Her landscapes are often deserted by mankind, albeit on occasion one can find some clues of human presence: a small boat, a building or a small character in the distance. This approach is recurrent in Dotsenko’s photographs and we are reminded of the practices of photographers and explorers of the 19th Century such as Maxime Du Camp, who included small figures into huge panoramas. Only thanks to this method, the viewer could guess the scale of the immense landscape. Dotsenko is an artist with a conscience, both spiritually and scientifically and her works are astoundedly dynamic. She is not just an artist but a philosopher, using her creations as vehicles for her elevated view of art and its purpose. In fact, her pastels on paper, with romantic colours and wonderful depth, instil a hopeful peace. The viewer shares her tangible joy of life, gift of assimilation, attention to intricate detail and interpretation of composition; the elements that reflect her solar personality and creative spirit. Timothy Warrington European Confederation of Art Critics

Golden Evening in the Sevastopol Bay by Yulia Vasilievna Dotsenko 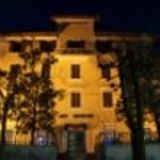