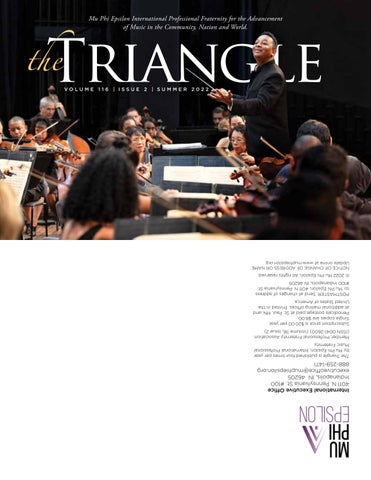 Mu Phi Epsilon International Professional Fraternity for the Advancement of Music in the Community, Nation and World.

This story originally appeared in OperaWire. It has been edited for style and space. n most countries around the world, once you leave the conservatory setting, you have a number of options through which you can build your career. Whether it be working with independent companies, engaging with young artist programs or even doing residencies, there are options — albeit competitive ones — available to the burgeoning opera artist. In some countries, there are even the means to create your own projects, start your companies, put on your own performances and build your career in that manner. But not in Cuba. When conductor Marlon Daniel (Mu Xi, New York City Alumni) headed to the Festival Mozart-Habana 2021 to lead a performance of Mozart’s “Don Giovanni,” he was struck by something he hadn’t encountered before. “In Cuba there are no vocal young artist programs like in the U.S. or Europe. It’s the school or the opera and no in between,” said Daniel, who is also the founder of Festival International de Music Saint-Georges in Guadeloupe and the first conductor to lead a performance of the composer’s long-lost opera “L’Amant Anonyme” in over 230 years. He noted that even when he was running auditions for “Don 2

Marlon Daniel (right) collaborated with Ubail Zamora and Ivette Betancourt, both professors at the University of the Arts in Cuba, to launch the Discovery Opera Project. Giovanni,” he was told that the process was beyond what anyone had ever experienced. A lot of the development aspects of the production process were also limited. This prompted Daniel to seek out a solution that would serve young Cuban artists and help them build their careers in their own country. And thus, the Discovery Opera Project was born.

What has working in Cuba taught you as an artist? What has surprised you about the young talent you are engaging with?

Cuba has taught me that being an artist really brings a plethora of possibilities. It’s a place where I can share all the knowledge I’ve learned from places like Manhattan School of Music, the Dayri Llanes Díaz Anyelín Díaz Oviedo Marcos Lima Prague Academie and from great people like Jorma Panula, and What was most apparent to Daniel was the strength of the soprano voices in Cuba. Two synthesize it to really engage the particularly stood out immediately during auditions: Dayri Llanes Díaz and Anyelín Díaz next generation of artists and help Oviedo, who sounds like a young Gruberová. Marcos Lima’s fantastic bass voice inspired them get started. the selection of works for future performances. Being in Cuba reminds me why I do what I do. The young What inspired you to create this Discovery Opera Project? talent have surprised me with their passion and desire to learn, I was hired to conduct Mozart’s “Don Giovanni” for Cuba’s making the most of the limited resources in their country. They prestigious Festival Mozart-Habana 2021. Since many of the have a deep hunger for knowledge and this inspires me to give singers from the National Opera were already involved in another my best in coaching sessions, rehearsals and on the podium. opera at the same festival, we decided to do a national audition for new singers. Looking forward, do you think this project will only focus What we discovered was that there is an abundance of vocal on Cuba or do you think there’s an opportunity for it to talent in Cuba, not necessarily all well-known or following the expand globally into other countries that might not have standard path to the Teatro Lírico Nacional de Cuba, an organizaas developed an opera industry? tion I respect, love and also worked with this season. This could happen, look at El Sistema. I believe if you nurture a seed it will grow. I’m content with making it be the best it can be You chose “Don Giovanni” as the first opera to showcase at this place in this time. I think it not only makes these talented young artists better but also myself. If it can grow or expand with this program. Why was that work the best one to launch beyond Cuba’s borders then I would love to see that happen, this project? Mozart’s “Don Giovanni” is a masterpiece. Like all Mozart, it is a but I also do not want to set my sights globally and miss on the great showcase for vocal technique, and it uses a variety of voice opportunity to really build something substantial from what we types. We were able to mostly double cast the performances and have started here. to use more singers. My immediate goal is to create a bridge to Teatro Lírico Nacional de Cuba and other organizations outside Cuba. “Rigoletto” and “The Abduction of the Seraglio” are among Maybe in the future organizations from abroad will also offer opportunities to these singers. those that are in plans for the future. What makes those works ideal for this program?

This first group of singers influenced our other opera selections. What we could do with the vocal talent we readily had available was obvious. I knew I wanted to do something with a fantastic bass who auditioned: Marcos Lima. Already a seasoned singer, there are few roles for his voice. So, I thought “let’s use what we have.” He would be an incredible Osmin in Mozart’s “Abduction” and Sparafucile in Verdi’s “Rigoletto.” I also have plans to bring guest artists as collaborators, both on and off the stage. This year we have internationally renowned baritone Stephen Salters. I’m still trying to convince him to not only teach and advise, but also play the title role in “Rigoletto.” This would be fantastic!

What do you hope this experience will provide for participants?

I am hoping that they see there is a whole world of singing opportunities and that there are people like me and my colleagues to help in any way we can, regardless of the seemingly limited situation. And what about for you personally? What do you hope to take away from this project?

With this experience, I personally want to make myself a better musician, organizer and teacher so that I can help nurture more of these vocal talents in Cuba. SUMMER 2022

Pianist, organist, composer. Ruth learned to play the accordion before the age of 10 and at the same time learned to play the pump organ. She was a gifted pianist who played in the National Piano Play Auditions earning the high school diploma as well as the college and young artist diplomas. Ruth graduated cum laude from Wichita State University in 1948 with a major in English and minors in French and music. Ruth had a large family and all of her children learned the piano as well as another instrument. She composed much of the music that her children played; she then created operettas and shows for the family to perform under the stage name “The Scheer Delights.” Rarely did an event pass without her composing either a song or a poem and two of her many songs were published. Ruth was a member of many organizations in Wichita, including the Wichita Grand Opera, the Wichita Chapter of the American Guild of Organists and Wichita Symphony Ambassadors. Ruth was a three-time president of the Thursday Afternoon Music Club and was a member and served as president for a term of the Wichita Alumni chapter of Mu Phi Epsilon.

Educator, cellist. Jacquelyn obtained her Bachelor of Music Education and Master of Music Education degrees from Wichita State University. She pursued doctoral studies at Louisiana State University. A dedicated trailblazer in string music education after graduating, she founded the orchestra program for Derby Public Schools. She also created string programs for the Norman Public Schools and Oklahoma City Public Schools. She moved into marketing and publishing music education materials with C.G. Conn and later worked for Boosey and Hawkes. As a cellist, she performed with symphonies in Wichita, Baton Rouge and Oklahoma City. She served as a guest clinician and conductor with string festivals and state and national music educator events and had guest professorships at nearly 50 universities during her tenure as a nationally known string pedagogue in the orchestra field. Jacquelyn served as president of the American String Teachers Association and was honored with the Lifetime Achievement Award from ASTA. Jacquelyn also received the Medal of Honor from the Midwest Clinic, the Hall of Fame Award from the Kansas ASTA and the Music of the Heart Award from the Kansas Music Educators Association. She published over 335 articles on string music education and wrote and/or co-wrote eight books. Her materials continue to be published and used throughout the world. Hundreds, if not thousands, of string music players, teachers and aficionados across the U.S. and other countries who have been taught by Jacquelyn use her music education materials and were inspired by her love of music.

Bonnie Lou (Molz) Becker Phi Pi, April 28, 1948 Wichita Alumni Died Feb. 14, 2022 Vocalist. Bonnie Lou graduated from Wichita University with a music education degree. During college, Bonnie sang leading roles in opera productions, was a soprano soloist at First Presbyterian Church and a soloist for the Wichita Choral Society. In 1951, she sang in the chorus for the opening season of Kansas City’s Starlight Theatre. Later years saw her singing with the Lyric Opera of Kansas City, Kansas City Symphony Chorus and the Leawood Singers. Bonnie was a member of the Wichita Alumni chapter.

Please send us your news items with photo to: editor@muphiepsilon.org

Lois (Johnson) Swanson Mu Mu, November 9, 1942 Died March 26, 2022 Educator, vocalist. Lois died on March 26, 2022, at the age of 98. She was a member of Mu Phi Epsilon at Kansas State University where she graduated in 1945 as a music major. Her first teaching assignment as a music teacher was in Valley Falls, Kansas. She married Ernest Swanson Jr. in 1946 and they moved to Ohio. For the next 70 years, Lois continued to enjoy and participate in music activities including singing in the Fiberglass Glee Club (Newark, Ohio) and the Bethlehem Lutheran Church (Cleveland Heights, Ohio) choir. She also directed the children’s choir at BLC and became a substitute teacher, often filling in for choir and band teachers. She instilled a love of music in her four children and grandchildren. 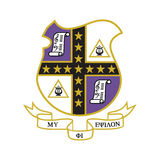 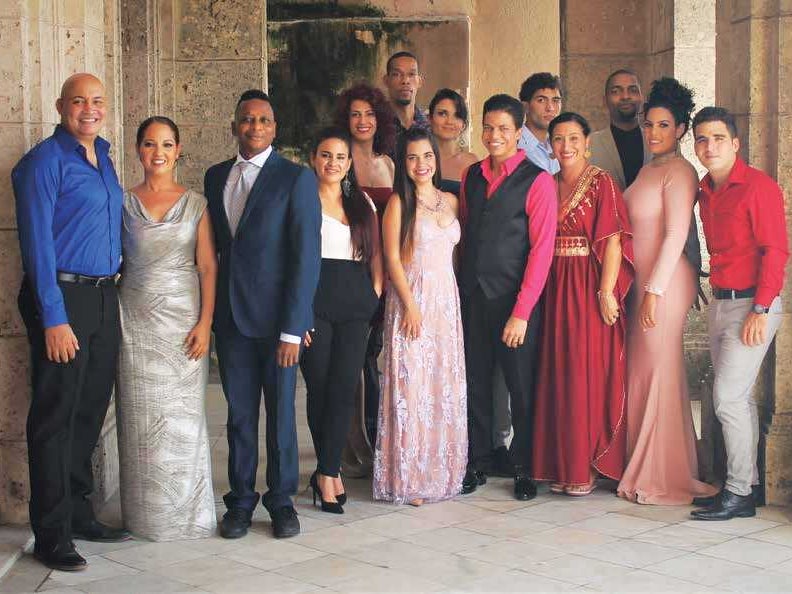