All About Women December 2016 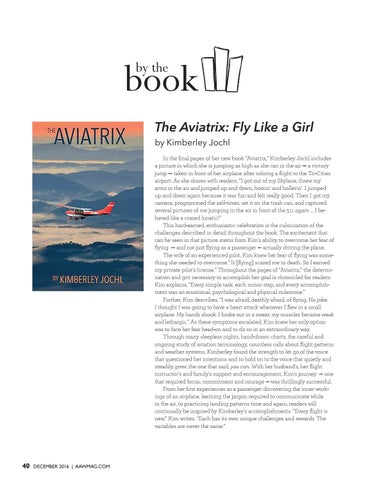 The Aviatrix: Fly Like a Girl by Kimberley Jochl In the ﬁnal pages of her new book “Aviatrix,” Kimberley Jochl includes a picture in which she is jumping as high as she can in the air — a victory jump — taken in front of her airplane after soloing a ﬂight to the Tri-Cities airport. As she shares with readers, “I got out of my Skylane, threw my arms in the air and jumped up and down, hootin’ and hollerin’. I jumped up and down again because it was fun and felt really good. Then I got my camera, programmed the self-timer, set it on the trash can, and captured several pictures of me jumping in the air in front of the 511 again … I behaved like a crazed lunatic!” This hard-earned, enthusiastic celebration is the culmination of the challenges described in detail throughout the book. The excitement that can be seen in that picture stems from Kim’s ability to overcome her fear of ﬂying — and not just ﬂying as a passenger — actually driving the plane. The wife of an experienced pilot, Kim knew her fear of ﬂying was something she needed to overcome.“ It [ﬂying] scared me to death. So I earned my private pilot’s license.” Throughout the pages of “Aviatrix,” the determination and grit necessary to accomplish her goal is chronicled for readers. Kim explains, “Every simple task, each minor step, and every accomplishment was an emotional, psychological and physical milestone.” Further, Kim describes, “I was afraid, deathly afraid, of ﬂying. No joke. I thought I was going to have a heart attack whenever I ﬂew in a small airplane. My hands shook. I broke out in a sweat; my muscles became weak and lethargic.” As these symptoms escalated, Kim knew her only option was to face her fear head-on and to do so in an extraordinary way. Through many sleepless nights, hand-drawn charts, the careful and ongoing study of aviation terminology, countless calls about ﬂight patterns and weather systems, Kimberley found the strength to let go of the voice that questioned her intentions and to hold on to the voice that quietly and steadily grew, the one that said, you can. With her husband’s, her ﬂight instructor’s and family’s support and encouragement, Kim’s journey — one that required focus, commitment and courage — was thrillingly successful. From her ﬁrst experiences as a passenger discovering the inner workings of an airplane, learning the jargon required to communicate while in the air, to practicing landing patterns time and again, readers will continually be inspired by Kimberley’s accomplishments. “Every ﬂight is new,” Kim writes. “Each has its own unique challenges and rewards. The variables are never the same.”

All About Women December 2016