The Bad Air Smelled of Roses 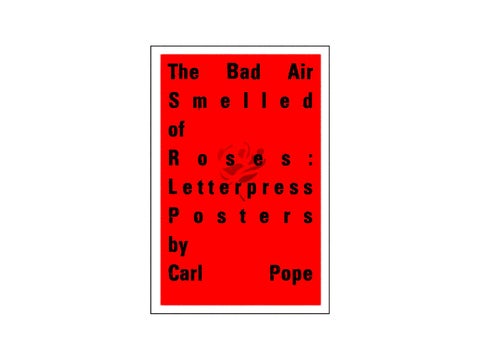 Carl Pope’s artistic practice is committed to the idea of art as a catalyst for individual and collective transformation. An early influence in his artistic practice was his high school photography teacher, Donna Hostettler, who endorsed the notion that art is an effective tool for positive social change. Her primary example was photography’s role in changing public support of the Vietnam War. She said, “It was not the protests that changed America’s understanding for the Vietnam War but the daily exhibition of horrific images in the media that swayed popular opinion about it.” Pope continued his work in this direction through his undergraduate years at Southern Illinois University. After graduating in 1984, Pope returned to Indianapolis to work as a freelance photographer in advertising and commercial photography while exhibiting his personal projects. His photographic and multi media investigations of the socio-economic landscape of Indianapolis earned critical acclaim at prestigious venues like the Museum of Modern Art and the Museum of Contemporary Photography in Chicago. The installation “The Black Community: An Ailing Body” received support from the John Simon Guggenheim Foundation and the National Endowment for the Arts in 1993. His work gained national and international exposure in two exhibits: New Photography 6 at the Museum of Modern Art and Black Male, at the Whitney Museum. Pope frequently works in large-scale public art and collaborates with communities and cities to stimulate public dialogue and revitalization. Pope expanded his public art practice with projects in Hartford, Ct, Atlanta and New York for “Black Male” at the Whitney Museum of American Art. In 1996, Pope enrolled in the MFA program at Indiana University and widened his conceptual concerns to include an investigation of the Self. The initial excursions into his own interior landscape produced Palimpsest, a video/writing project with twin sister Karen Pope. Palimpsest, commissioned by the Wadsworth Athenaeum with grants from the Warhol and Lannan foundations, was included in the Whitney Biennial 2000 exhibition. Pope’s most recent installation of letterpress posters called The Bad Air Smelled of Roses continues his ongoing exploration into inner space. “I am navigating my interiority in order to enrich my life and to find stimulating ways to create epiphany and revelation within the imagination of my audience.”

The Bad Air Smelled of Roses   3

An Exhibition of Letterpress Posters Creating an Ongoing Essay in Phenomenology Carl Pope’s ongoing essay, The Bad Air Smelled of Roses continuously provokes by introducing thoughts, delivered by way of letterpress posters, to an audience with the intention of “creating epiphany and revelation within the imagination of my audience”. Pope explores the concept of Phenomenology as seen in the writings of Martin Heidigger, a German philosopher of the early 20th century. Heidigger contended that self-exploration in the 20th century was a trap, because our way of questioning defied nature. He believed our presuppositions about human nature inevitably led to our failure at any sort of discovery, because of the “always already”. Essentially, what he was getting at in his most well-known book, Sein und Zeit (Being and Time) was that we couldn’t trust ourselves to reveal anything about ourselves, e.g., consciousness, because we had to eliminate our idea of existing as a specific being---and the only way to accomplish this was through a process of repetitive interpretation (critique), such as Hermeneutics. Pope uses the medium of letterpress posters because they represent a presumptuous idea-they seem official. People look at the printed posters as a source of information and even direction. What Pope offers, however, is misdirection , so the viewer is required to reconsider, because the message is contrary to the viewer’s concept of reality. His work, ECHO THE FICTION OF MY IDENTITY , points to what Heidigger meant in Sein und Zeit . The literal message or direction given is for the viewer is to “echo” or support what comes next, but then he follows with “the fiction of my identity”, which confuses the viewer and then provokes a reactionary response. This is exactly Pope’s goal: incite the viewer to question his current state of consciousness, or how he defines things, and simultaneously encourage him to develop new ideas. What is crucial is that these ideas are initiated from a standpoint that is different than before---and according to Pope, that is more valuable. One work reads, “MOVE INTO THE GAP BETWEEN WORDS AND REALITY”. The artist is also not bound by truth to initiate this process: Pope can use messages that are absurd or even blatantly false to serve his purpose of jerking the rug out from under the viewer. An example of this is his work, AS A BLACK WOMAN I FEEL AN URGENT NEED TO FIND Radical SOLUTIONS.

4  The Bad Air Smelled of Roses

Another artist who explores phenomenology in a similar fashion is Shepard Fairey, with his OBEY THE GIANT propaganda campaign. Fairey created a fictional, but official-looking image, presented via stickers and graffiti pasters, in an attempt to unbalance the viewer and provoke reflection. Most of Pope’s subject matter, or what he might be inclined to call, “anti-subject matter” is concerned with his identity as an African American. Borrowing from the writings of Alain Locke (The New Negro, 1925) and Hubert Harrison (The Voice) and his “New Negro Movement”, Pope questions the role and identity of the African American today. He accomplishes this, not by offering solutions or pre-supposed identities, but by questioning everything and being provocative---and then as Heidigger explained the usefulness of Phenomenology, “letting things manifest themselves”. Some people might find several of the messages offensive, but Pope challenges them to question the very perspective from which that reaction emanates: WHAT IS A NEGRO WITH A PH.D? or BLACK GENIUS IS SO COMMON THESE DAYS are two such examples. In The Bad Air Smelled of Roses , Pope attempts to finesse the over-the-top play. He seeks to explore the “inner space” through public, in-your-face art. He rejects images and simplifies the messages, being careful not to offer any complete packages or ideas--he leaves things wide open, “letting things manifest themselves”.

The Bad Air Smelled of Roses   5

The Bad Air Smelled of Roses   7

The Bad Air Smelled of Roses   9

24  The Bad Air Smelled of Roses

The Mind of Cleveland, Cleveland Institute of Art

Silent Wishes, reinstalled at the Church of the Good Shepherd, Hartford, CT

Asst Professor University of Illinois, Chicago (2003-2004) Joint Fellow, The Baker-Nord Center for the Humanities at Case Western Reserve University and the Cleveland Institute of Art (2007)

The Bad Air Smelled of Roses