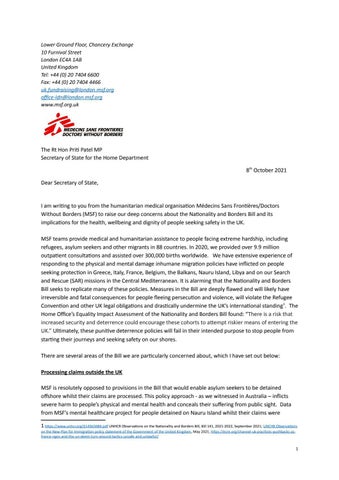 I am writing to you from the humanitarian medical organisation Médecins Sans Frontières/Doctors Without Borders (MSF) to raise our deep concerns about the Nationality and Borders Bill and its implications for the health, wellbeing and dignity of people seeking safety in the UK. MSF teams provide medical and humanitarian assistance to people facing extreme hardship, including refugees, asylum seekers and other migrants in 88 countries. In 2020, we provided over 9.9 million outpatient consultations and assisted over 300,000 births worldwide. We have extensive experience of responding to the physical and mental damage inhumane migration policies have inflicted on people seeking protection in Greece, Italy, France, Belgium, the Balkans, Nauru Island, Libya and on our Search and Rescue (SAR) missions in the Central Mediterranean. It is alarming that the Nationality and Borders Bill seeks to replicate many of these policies. Measures in the Bill are deeply flawed and will likely have irreversible and fatal consequences for people fleeing persecution and violence, will violate the Refugee Convention and other UK legal obligations and drastically undermine the UK’s international standing1. The Home Office’s Equality Impact Assessment of the Nationality and Borders Bill found: “There is a risk that increased security and deterrence could encourage these cohorts to attempt riskier means of entering the UK.” Ultimately, these punitive deterrence policies will fail in their intended purpose to stop people from starting their journeys and seeking safety on our shores. There are several areas of the Bill we are particularly concerned about, which I have set out below: Processing claims outside the UK MSF is resolutely opposed to provisions in the Bill that would enable asylum seekers to be detained offshore whilst their claims are processed. This policy approach - as we witnessed in Australia – inflicts severe harm to people’s physical and mental health and conceals their suffering from public sight. Data from MSF’s mental healthcare project for people detained on Nauru Island whilst their claims were 1 https://www.unhcr.org/6149d3484.pdf UNHCR Observations on the Nationality and Borders Bill, Bill 141, 2021-2022, September 2021; UNCHR Observations on the New Plan for Immigration policy statement of the Government of the United Kingdom, May 2021, https://ecre.org/channel-uk-practices-pushbacks-asfrance-ngos-and-the-un-deem-turn-around-tactics-unsafe-and-unlawful/

processed demonstrated some of the worst mental health suffering we have ever encountered, including in projects working with survivors of torture. Our mental health teams saw first-hand the horrific sometimes fatal – impacts of offshoring, where almost one-third of the 208 refugee and asylum seeker MSF patients attempted suicide and where 12 patients were diagnosed with a rare psychiatric condition called ‘Resignation Syndrome’. Children, as young as nine, trapped on the island were found to have suicidal thoughts, committed acts of self-harm and attempted suicide. The Chief Prosecutor of the International Criminal Court declared Australia’s offshore detention ‘cruel, inhuman or degrading treatment’ as well as unlawful under international law. It is also an astronomically expensive policy to pursue, with the Australian Government paying contractors almost (AUS) $3.4 million a year for each person held in detention. This policy has failed to work as an effective deterrent to people fleeing danger; instead, has caused widespread suffering, death and wasted public funds. No element of it should be replicated in the UK. The UK Government has a responsibility to process asylum claims of those arriving on our shores in a fair and efficient manner and must not transfer this to another country. Detention and Creation of Asylum Accommodation We are alarmed by plans in the Bill to expand the use of large-scale asylum accommodation, which would effectively confine people to detention-like settings and threaten their access to quality healthcare, especially mental healthcare, as well as other basic services. This is particularly concerning as people seeking safety have often already experienced traumatic events, including torture and sexual violence, in their home country and on their journeys. Many of our asylum seeking and refugee patients have a high prevalence of serious mental health conditions, including post-traumatic stress disorder (PTSD), moderate to severe depression and psychosis, which require specialised and long-term care: criminalising and detaining people in prison-like institutional accommodation segregated from broader society risks exacerbating these serious mental health conditions. Furthermore, it conceals their suffering from public view and deprives people of their liberty, dignity and agency and obstructs integration and crushes hopes of building bright and stable futures. MSF teams working on the Greek islands of Chios, Samos and Lesvos, where, since 2016 thousands of people have been trapped indefinitely in large reception centres, have responded to acute levels of mental health suffering. This includes self-harm and suicide attempts by children as young as 6 years old. This suffering has been compounded by the containment and the everyday structural violence within the centres, combined with a sense of hopelessness due to having no control over their future. MSF projects in detention and containment settings, such as on Nauru Island, have found similarly high rates of suicide. Pushbacks We are extremely concerned by this Government’s plans to pursue pushback tactics which are dangerous, harmful and could be in breach of international law. Our teams on the Greek Islands, in Libya and on our SAR boats have seen first-hand the often-deadly consequences of choosing not to rescue people and pushback tactics at sea. Over 1,000 people have already drowned in the Central Mediterranean (January July 2021) because of EU and UK backed policies that undermine and hinder effective search and rescue. Nearly 25,000 people have been forcibly returned to Libya this year. The UK has supported the Libyan Coast Guard, enabling the coast guard to intercept people in boats and return them to detention centres, which are overcrowded and filthy and where people are exposed to infectious disease outbreaks (scabies, tuberculosis) and violence. MSF teams on our SAR boats in the Central Mediterranean have rescued

exhausted and traumatised individuals, including unaccompanied children, pregnant women and newborn babies. For most, this crossing is a last resort in a desperate attempt to reach safety. The men, women and children who arrive on the UK shores are ordinary people who have been forced to leave their homes, family, friends and culture and make treacherous journeys in search of safety. They should not be pushed back, criminalised or made examples of, to deter others from making similar journeys. The UK Government must always respect its legal responsibility to uphold the principle of nonrefoulement. Differential treatment of refugees and safe &amp; legal routes The introduction of a two-tier system, which treats asylum seekers differently based on their method of entry into the UK rather than their need for protection is discriminatory, harmful and inhumane. Measures in this Bill will mean vulnerable people, including unaccompanied children and survivors of torture and sexual violence, arriving irregularly will be criminalised and denied the protection they need, contravening the Refugee Convention. Yet, with the premature ending of the Dubs Scheme and the suspension of family reunification, this Government has removed the only available safe and legal routes to the UK from within Europe. Furthermore, for people outside of Europe the only opportunity set out in the Bill to come to the UK is through the UNHCR resettlement route. This resettlement pathway is slow, does not provide safety for people in immediate danger and fails to meet the global protection needs, only resettling one percent of all refugees each year. Rather than ‘break the business model of the smugglers,’ which is its intended purpose, this Bill will further push people seeking safety into the hands of smugglers, risking their lives because there are insufficient safe and legal routes to the UK. The logic that deterrence policies work that underpins the Nationality and Borders Bill is flawed. Certain measures in the Bill will likely have long-term, irreversible and fatal consequences for people fleeing persecution and violence, in addition to violating the UK’s international legal obligations. We are particularly concerned by several provisions in the Bill around the detrimental impacts of a two-tier system based on mode of arrival, the negative impact of offshoring, pushbacks and returns, and the harms caused by expanding detention centres. We therefore call on this Government to: 

Remove Clause 10 and accord the same dignified treatment and access to asylum procedures to all persons seeking asylum in the UK, regardless of their mode of entry to the UK.

Urgently create new safe and legal routes to the UK for people seeking sanctuary in the UK who are both inside and outside Europe.

Immediately reinstate and expand safe, legal pathways within Europe for unaccompanied children and family reunion routes for those wanting to join family already in the UK.

Increase this Government’s ongoing resettlement commitments for asylum seekers and refugees of all nationalities.

Halt all plans to detain and contain asylum seekers in large-scale asylum accommodation centres and instead house people in safe and dignified housing in the community, ensuring that they can access quality and timely physical and mental healthcare.

Remove Clause 26 and urgently scrap any plans to detain asylum seekers offshore whilst their claims are processed. Asylum claims must be processed in an efficient, fair and transparent manner in the UK.

Stop all plans to pursue dangerous policies of forced returns, including pushback tactics, and respect its legal responsibility to uphold the principle of non-refoulement.

I would value the opportunity to discuss some of these urgent concerns. I would be grateful if you could inform me of a time when it might be convenient to you. In the meantime, I would of course be happy to provide further information on any of the areas I have outlined above, should that be helpful.

Our staff have seen some of the world’s worst examples of the abuse and mistreatment of vulnerable refugees. From the Greek islands, where children are packed into dangerous, filthy camps at a terrible cost to their mental and physical health, to Libya, where people, including pregnant women and babies, are rescued in the Mediterranean and pushed back into terrifying detention centres – Médecins Sans Frontières / Doctors Without Borders (MSF) medical teams have seen the worst. That is why we are so worried that the UK Government is now trying to import these inhumane, potentially lethal approaches into this country. We need your help to persuade them to think again. https://msf.org.uk/issues/tell-uk-government-fix-its-inhumane-borders-bill 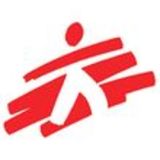