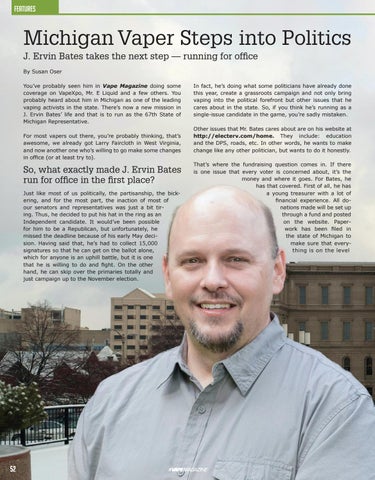 Michigan Vaper Steps into Politics J. Ervin Bates takes the next step — running for office By Susan Oser You’ve probably seen him in Vape Magazine doing some coverage on VapeXpo, Mr. E Liquid and a few others. You probably heard about him in Michigan as one of the leading vaping activists in the state. There’s now a new mission in J. Ervin Bates’ life and that is to run as the 67th State of Michigan Representative. For most vapers out there, you’re probably thinking, that’s awesome, we already got Larry Faircloth in West Virginia, and now another one who’s willing to go make some changes in office (or at least try to).

So, what exactly made J. Ervin Bates run for office in the first place? Just like most of us politically, the partisanship, the bickering, and for the most part, the inaction of most of our senators and representatives was just a bit tiring. Thus, he decided to put his hat in the ring as an Independent candidate. It would’ve been possible for him to be a Republican, but unfortunately, he missed the deadline because of his early May decision. Having said that, he’s had to collect 15,000 signatures so that he can get on the ballot alone, which for anyone is an uphill battle, but it is one that he is willing to do and fight. On the other hand, he can skip over the primaries totally and just campaign up to the November election.

In fact, he’s doing what some politicians have already done this year, create a grassroots campaign and not only bring vaping into the political forefront but other issues that he cares about in the state. So, if you think he’s running as a single-issue candidate in the game, you’re sadly mistaken. Other issues that Mr. Bates cares about are on his website at http://electerv.com/home. They include: education and the DPS, roads, etc. In other words, he wants to make change like any other politician, but wants to do it honestly. That’s where the fundraising question comes in. If there is one issue that every voter is concerned about, it’s the money and where it goes. For Bates, he has that covered. First of all, he has a young treasurer with a lot of financial experience. All donations made will be set up through a fund and posted on the website. Paperwork has been filed in the state of Michigan to make sure that everything is on the level