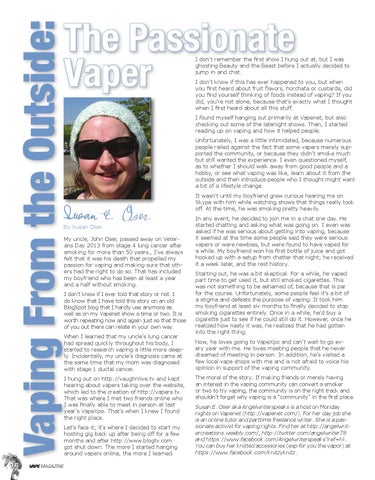 Vaping From the Outside:

By Susan Oser My uncle, John Oser, passed away on Veterans Day 2013 from stage 4 lung cancer after smoking for more than 50 years., I’ve always felt that it was his death that propelled my passion for vaping and making sure that others had the right to do so. That has included my boyfriend who has been at least a year and a half without smoking. I don’t know if I ever told that story or not. I do know that I have told this story on an old BlogSpot blog that I hardly use anymore as well as on my Vapenet show a time or two. It is worth repeating now and again just so that those of you out there can relate in your own way. When I learned that my uncle’s lung cancer had spread quickly throughout his body, I started to research vaping a little more deeply. Incidentally, my uncle’s diagnosis came at the same time that my mom was diagnosed with stage 1 ductal cancer. I hung out on http://vaughnlive.tv and kept hearing about vapers taking over the website, which led to the creation of http://vapers.tv. That was where I met two friends online who I was finally able to meet in person at last year’s VapeXpo. That’s when I knew I found the right place. Let’s face it; it’s where I decided to start my hosting gig back up after being off for a few months and after http://www.blogtv.com got shut down. The more I started hanging around vapers online, the more I learned.

I don’t remember the first show I hung out at, but I was ghosting Beauty and the Beast before I actually decided to jump in and chat. I don’t know if this has ever happened to you, but when you first heard about fruit flavors, horchata or custards, did you find yourself thinking of foods instead of vaping? If you did, you’re not alone, because that’s exactly what I thought when I first heard about all this stuff. I found myself hanging out primarily at Vapenet, but also checking out some of the latenight shows. Then, I started reading up on vaping and how it helped people. Unfortunately, I was a little intimidated, because numerous people railed against the fact that some vapers merely supported the community, or because they didn’t smoke much but still wanted the experience. I even questioned myself, as to whether I should walk away from good people and a hobby, or see what vaping was like, learn about it from the outside and then introduce people who I thought might want a bit of a lifestyle change. It wasn’t until my boyfriend grew curious hearing me on Skype with him while watching shows that things really took off. At the time, he was smoking pretty heavily. In any event, he decided to join me in a chat one day. He started chatting and asking what was going on. I even was asked if he was serious about getting into vaping, because it seemed at the time some people said they were serious vapers or were newbies, but were found to have vaped for a while. My boyfriend won his first bottle of juice and got hooked up with a setup from chatter that night; he received it a week later, and the rest history. Starting out, he was a bit skeptical. For a while, he vaped part time to get used it, but still smoked cigarettes. This was not something to be ashamed of, because that is par for the course. Unfortunately, some people feel it’s a bit of a stigma and defeats the purpose of vaping. It took him my boyfriend at least six months to finally decided to stop smoking cigarettes entirely. Once in a while, he’d buy a cigarette just to see if he could still do it. However, once he realized how nasty it was, he realized that he had gotten into the right thing. Now, he loves going to VapeXpo and can’t wait to go every year with me. He loves meeting people that he never dreamed of meeting in person. In addition, he’s visited a few local vape shops with me and is not afraid to voice his opinion in support of the vaping community. The moral of the story: If making friends or merely having an interest in the vaping community can convert a smoker or two to try vaping, the community is on the right track and shouldn’t forget why vaping is a “community” in the first place.

Susan E. Oser aka Angelwriterspeaks is a host on Monday nights on Vapenet (http://vapenet.com/). For her day job she is an online tutor and parttime freelance writer. She is a passionate activist for vaping rights. Find her at http://angelwritercreations.weebly.com/, http://twitter.com/angelwriter78 and https://www.facebook.com/Angelwriterspeaks?ref=hl. You can buy her knitted accessories (esp for you the vapor) at https://www.facebook.com/knitzyknitz.