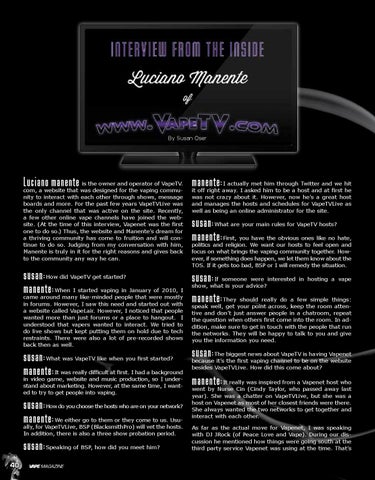 : I actually met him through Twitter and we hit Luciano manente is the owner and operator of VapeTV. manente it off right away. I asked him to be a host and at first he com, a website that was designed for the vaping community to interact with each other through shows, message boards and more. For the past few years VapeTVLive was the only channel that was active on the site. Recently, a few other online vape channels have joined the website. (At the time of this interview, Vapenet was the first one to do so.) Thus, the website and Manente’s dream for a thriving community has come to fruition and will continue to do so. Judging from my conversation with him, Manente is truly in it for the right reasons and gives back to the community any way he can.

was not crazy about it. However, now he’s a great host and manages the hosts and schedules for VapeTVLive as well as being an online administrator for the site.

susan : What are your main rules for VapeTV hosts? : First, you have the obvious ones like no hate, manente politics and religion. We want our hosts to feel open and

focus on what brings the vaping community together. However, if something does happen, we let them know about the TOS. If it gets too bad, BSP or I will remedy the situation.

susan : How did VapeTV get started? susan : If someone were interested in hosting a vape show, what is your advice? : When I started vaping in January of 2010, I manente came around many like-minded people that were mostly : They should really do a few simple things: manente in forums. However, I saw this need and started out with speak well, get your point across, keep the room attena website called VapeLair. However, I noticed that people wanted more than just forums or a place to hangout. I understood that vapers wanted to interact. We tried to do live shows but kept putting them on hold due to tech restraints. There were also a lot of pre-recorded shows back then as well.

tive and don’t just answer people in a chatroom, repeat the question when others first come into the room. In addition, make sure to get in touch with the people that run the networks. They will be happy to talk to you and give you the information you need.

biggest news about VapeTV is having Vapenet susan : The susan : What was VapeTV like when you first started? because it’s the first vaping channel to be on the website : It was really difficult at first. I had a background besides VapeTVLive. How did this come about? manente in video game, website and music production, so I under: It really was inspired from a Vapenet host who manente stand about marketing. However, at the same time, I wantwent by Nurse Cin (Cindy Taylor, who passed away last ed to try to get people into vaping.

susan : How do you choose the hosts who are on your network? : We either go to them or they come to us. Usumanente ally, for VapeTVLive, BSP (BlacksmithPro) will vet the hosts. In addition, there is also a three show probation period.

year). She was a chatter on VapeTVLive, but she was a host on Vapenet as most of her closest friends were there. She always wanted the two networks to get together and interact with each other. As far as the actual move for Vapenet, I was speaking with DJ JRock (of Peace Love and Vape). During our discussion he mentioned how things were going south at the third party service Vapenet was using at the time. That’s