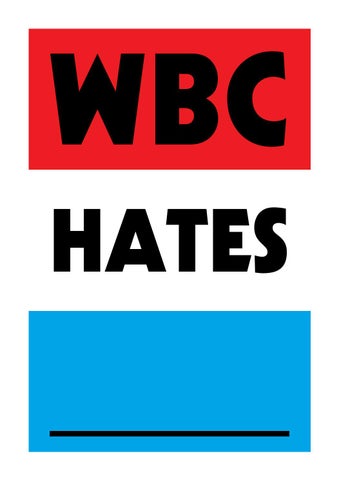 Thou shalt not hate thy brother in thine heart: thou shalt in any wise rebuke thy neighbour, and not suffer sin upon him. (Lev 19:17)

Phelps get law degree from Washburn

the age of 16 and enters West Point Military

Academy – But instead decides to become a

cases. “I systematically brought down

preacher after attending a Methodist revival.

the Jim Crow Laws of this town”

Phelps enrols at Bob Jones University, and then

First service held at the

and John Muir College where he was profiled for preaching against “…sins committed on campus by students and teachers, promiscuous petting, evil language, profanity, cheating, teachers’ filthy jokes in the classroom and pandering to lusts of the flesh.”

1974 Phelps files a $50-million class action law suit against Sears after a local outlet is several days late in delivering a television set. Litigation continues for six years and is eventually settled with Sears paying Phelps $126, about $60 less than Phelps’ son originally paid for the TV. Which they never received.

1986 Phelps receives a civil rights award from the Greater Kansas chapter of Blacks In Government.

Until the mid-70’s the Phelps’s income reportedly

Phelps is disbarred in Kansas after suing and

Fred Phelps receives and award from the

came from their children selling candy door to

harassing a court reporter who was late with a

Bonner Springs branch of the NAACP for his

door, the church was later sued by two companies

document, He continued to practice in Federal

“Steely determination for justice during his

for failure to pay for the candy that they resold

courts until 1989, when he agrees not to after

tenure as a civil rights attorney”

The Church begins the picketing of AIDS victimâ&amp;#x20AC;&amp;#x2122;s

Jerry Falwell after he makes a conciliatory

gesture toward a gay former aide.

Fred Phelps runs for US Senate in Kansas

getting 30.8% of the vote in the democratic primary.

At least 5 petitions have been created against the

WBC protest the funeral of US Marine

Judgement is overturned by and

WBC and have passed the 25,000 signature threshold

Matthew Snyder who was killed in

appeals court and it is ruled that Snyder

required to elicit a response from the White House,

Iraq which led to a lengthy legal

including recognizing them as a “Hate Group” and

After a petition from Snyder, the

because of Phelps’ belief that soldiers

WBC should pay emotional damages and his

and army that included gays were

court costs as well as punitive damages for

“Reprehensible actions” The Snyder family were awarded $2.9 million in compensatory damages plus $8 million in punitive damages.

The Westboro Baptist Church are famed for their talent of putting bullshit slogans onto badly designed placards and slinging verses of fire and brimstone. Of course, this is not to invoke a reaction of anger because they are a bunch of damaged bigoted oxygen thieves. It’s to “warn” people of the impact their lifestyle will have on their soul because the big man upstairs only loves the Phelps clan and if you don’t listen to them he won’t be happy because you ignored his favourite people and you don’t get any sweets.

YOU WILL EAT YOUR

Just some of the snappier lines of bullshit they tout on their signs*. The sentiments tend to be short and to the point and you can recognise the Westbro trademark style immediately. It must be admitted that they have done an amazing job of establishing their particular brand of dickheadishness and sticking to it. * With slight changes.

The founder of this particular crevice of cretins passed away this year. Pastor Fred Phelps [Dead Phelps if you will] was the churches’ bigoted mastermind. In the later years of his life his daughter and Worzel Gummidge impersonator Shirley PhelpsRoper has been the public face of the bunch of bastards. In an interview with Made Up news Shirley was quoted as saying “A Cup o’ Tea an’ God hates fags... Aunt Sally”

The WBC often parody popular songs like a xenophobic Weird Al Yankovic. Some of their hits include; “Satan’s Lair” (Scarborough Fair) “Dyke Wedding” (White Wedding) “No Poker Face” (Poker Face) As evidenced above these people are modern day Oscar Wildes… just without all the gay sex.

Itâ&amp;#x20AC;&amp;#x2122;s fair to say at their root this troupe of twats are probably nice people who actually believe the shit they say, which is kind of tragic, really. And with the death of Fred Phelps a number of prominent news outlets and individuals have heralded him as the best thing to happen to the gay rights movement since Stonewall. Apparently the vile agenda he preached left right and centre can be posthumously justified in some way as it repulsed people the point they end up on the side of equality. But here is the thingâ&amp;#x20AC;Ś

What a group complete

When filmmaker Kevin Smith found out the haters of the Westboro Baptist Church were going to picket the screening of his movie ‘Red State’ (Containing a religious group based on the WBC but with more guns) he put out a press release, a sort of call to arms inviting his fans to counter protest. “All are welcome. Wear YOUR dopey sentiments nobody gives a shit about on a sign of your own making, as you stand shoulder-to-shoulder with the folks who’ve mastered the art of writing utter horseshit on cardboard! BYOS (Bring Your Own Sign)” And now after everything that has been presented to you I invite you to do the same with the kit provided.

Cut out and use loudhailer Cut Fold