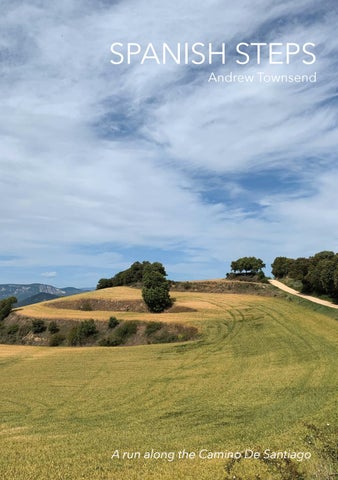 A run along the Camino De Santiago

The adventure begins and I leave the hotel to take the first step of what will be more than a million steps over the next month. The start is always the same - will I, wonâ&amp;#x20AC;&amp;#x2122;t I? The feeling of excitement mixed with trepidation. But I know too that soon the doubts will dissipate and I will be totally immersed in the moment - thatâ&amp;#x20AC;&amp;#x2122;s the joy of running.

Checkpoint Charlie .. Thereâ&amp;#x20AC;&amp;#x2122;s something about crossing an unmanned border into a new country. I climbed and climbed up the Pyrenees and suddenly with one step I bounded from France into Spain. A different country with different cultures and traditions within a few steps.

Hemingway Country I fly though Roncesvalles joining the Camino De Santiago and head towards Pamplona. Before long I reach Burguete where Ernest Hemingway spent time in 1924. Itâ&amp;#x20AC;&amp;#x2122;s not the first time weâ&amp;#x20AC;&amp;#x2DC;ve crossed paths - I passed through Burguete on my run across Spain in 2016. I cross the river and feel his presence again (he was a very keen fisherman and the waters here are famous for fly fishing).

Camino de Santiago Endless rolling fields meeting blue sky. A lone, pink and blue clad runner passing sombrely dressed pilgrims. Thereâ&amp;#x20AC;&amp;#x2122;s room for all of us on our own journey of contemplation and discovery. I come to a spot with a little shrine - pilgrims leave mementos all along the route, shoes, pictures, keepsakes of loved ones. I&#39;m sharing this breathtaking view with a Korean couple and their daughter. We smile at each other and the enchanting daughter, who is in her full national dress and can be no more than four or five, proffers a tiny white daisy. &quot;Take it, she wants you to be safe on your journey&quot; says the mother. A moment as incongruous as it is beautiful.

THREE FRIENDS - “I’m 92 and we meet here every evening to talk about life” the man with the broad smile and jaunty beret tells me. I notice the womenfolk sitting on a separate bench - same view different perspective and what a view.

Time to talk - the wives share their bench slightly away from the men after all they have stories to tell too and not for male ears. One of them is shy and hides her face. &quot;I don&#39;t like my picture being taken&quot; she says. &quot;Why?&quot; &quot;You&#39;re beautiful and your village is too&quot; I remark. She relents but insists on keeping her hand up to her face.

Community - As I continue my journey, i wonder why the locals in the villages appear so happy. Yes they have the climate, an abundance of fresh produce and beautiful scenery. But there is something else. On the face of it their lives seem quite hard - no smartphones, sky boxes and mac books here. They just seem to have time and each other &#39;vida sencilla&#39; .... and that of course is the answer.

Najara - An old French Paratrooper, a veteran of the war in Cambodia, clutching an ornately carved stick and telling his story to anyone who will listen. A festival, the streets thronged with proud Spaniards in national costume taking part in the parade. I notice the eyes of the children, some as young as five or six - the trepidation, the anticipation but above all the excitement.

Iâ&amp;#x20AC;&amp;#x2122;m nearly at the end of stage one - less than 50 miles to go. The heat is relentless and I stop in a swanky hotel for a lemonade and to re-fill my water bottles. Through a beautifully kept and regimented vineyard before entering a deserted wood. There are little objects hanging in the trees, a dilapidated graffiti covered chapel and I feel that I am being watched the whole time. Despite my tiredness and the heat I run as fast as I can for half an hour to escape the clutches of the wood.

The next day it’s Burgos. I see a sign offering an alternative but longer route … I take it and run through a deserted wood, but friendly and completely different from the day before and I see another sign. “You have decided to take the road less travelled” - a metaphor for my life. I reach the crest of the hill and see the sprawling town of Burgos beneath me but there’s more adventures to come before I can rest. A race down the mountain with a man and his daughter, laughing and shrieking all the way, a wrong turn and I end up skirting a military airfield before I am in the outskirts of Burgos - Eight days and 173 miles from the starting point in the French Pyrenees. I wander into the town and within five minutes I have found a lens cap, a haircut and a cold drink.

Via Verde - No time to rest and I start the second leg which takes me down the Via Verde de la Sierra Demanda - a path that was once an early 20th Century mining railway. Itâ&amp;#x20AC;&amp;#x2122;s straight, well kept and deserted with a nagging gentle uphill incline. Iâ&amp;#x20AC;&amp;#x2122;m starting to pick up injuries - a sore heel and an enormous blister. I press on relentlessly mile after mile. .

La Sierra Demanda &amp; The Blue Lagoon - Two more days and Iâ&amp;#x20AC;&amp;#x2122;m done with the Sierra Demanda but not before a diversion to the Blue Lagoon an amazing hidden glacial lake. The water looks so inviting to a hot and weary runner but I resist the temptation to dive in. Stage 2 is complete and itâ&amp;#x20AC;&amp;#x2122;s now time to travel by car to the Picos Mountains and the biggest challenge of the trip, the three day, three stage Riano Trail Race.

Running with the hens - Sierra Demanda

Picos race day - The vista takes your breath away. Majestic mountains rising from the shores of lakes with their peaks in the swirling clouds. Amongst all this beauty the bright pink tents waiting for the race competitors. We mill around waiting for the start of the first stage. Excited voices, bright, vibrant colours and blaring music over the instructions of the announcer. Three, two one - a hooter sounds and we are off. Immediately a relentless climb out of the village and it is like this for the next seven hours. All the while surrounded by breathtaking scenery. I finish the stage with four minutes to spare and Iâ&amp;#x20AC;&amp;#x2122;m presented with a silver cup as the last finisher. Iâ&amp;#x20AC;&amp;#x2122;m elated all tiredness and the previous 300 miles forgotten.

Picos to Zamora - Stage 3 of the race is truly a life changing experience. The view from the top, with the finish at Riano a mere dot below, takes your breath away and will be indelibly printed on my mind. I somehow stagger over the finish line but at what cost - my torn meniscus injury in my knee has come back to haunt me. But I keep smiling - no one will ever be able to take away that final climb up the mountain and that view. I drive down to beautiful Zamora - some call it &quot;the poor man&#39;s Salamanca&quot; but it is equal in every way with a character that is entirely its own. A man reading a newspaper, two friends talking and a man on his mobile phone all in one frame; the old mixing with the new. The apartment is fantastic dating back to the 17th Century with enormous thick stone walls. After 18 days pounding the trails it feels strange to be able to relax and explore but that&#39;s exactly what I do. A chance to rest my aching bones and see if my knee will recover. The next stop is Granada, 350 miles to the South, but that&#39;s another story for another day.

Spanish Steps - a 306 mile run along the Camino de Santiago

A 300 mile run down the iconic Camino de Santiago taking in Pamplona, Le Sierra De Demanda, The Picos Mountains and Zemora. Captured in words and pictures. 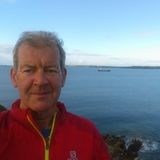