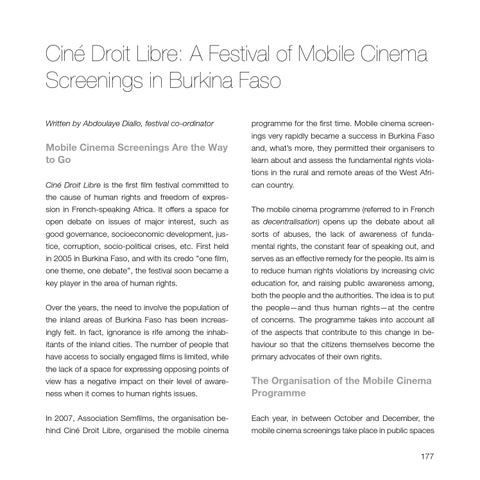 Mobile Cinema Screenings Are the Way to Go

and, what’s more, they permitted their organisers to learn about and assess the fundamental rights violations in the rural and remote areas of the West Afri-

Ciné Droit Libre is the first film festival committed to

the cause of human rights and freedom of expression in French-speaking Africa. It offers a space for

The mobile cinema programme (referred to in French

open debate on issues of major interest, such as

as decentralisation) opens up the debate about all

sorts of abuses, the lack of awareness of funda-

mental rights, the constant fear of speaking out, and

serves as an effective remedy for the people. Its aim is

one theme, one debate’’, the festival soon became a

key player in the area of human rights.

education for, and raising public awareness among, both the people and the authorities. The idea is to put

Over the years, the need to involve the population of

the inland areas of Burkina Faso has been increas-

ingly felt. In fact, ignorance is rife among the inhab-

of the aspects that contribute to this change in be-

itants of the inland cities. The number of people that

haviour so that the citizens themselves become the

have access to socially engaged films is limited, while

primary advocates of their own rights.

the lack of a space for expressing opposing points of ness when it comes to human rights issues.

The Organisation of the Mobile Cinema Programme

In 2007, Association Semfilms, the organisation be-

Each year, in between October and December, the

view has a negative impact on their level of aware-

in seven Burkina Fasoan cities. Most screenings are

ity and well known human rights activists) and on the

open-air screenings. From one year to the next, the

films whose themes are of interest to the people. The

cities change, with the exception of Bobo-Dioulasso

strategy is implemented making use of a communica-

in the west and Ouahigouya in the north of the coun-

tion plan that consists of:

try, two cities where Ciné Droit Libre has established film societies. In its initial stages, the organisation of

A radio commercial in French and local languages

the festival is composed of a small coordination team

responsible for the creation of the programme as well

Grass-roots communication throughout the entire

city orchestrated by a “town crier” on market days

screened. Once the festival has started, this team is

and on the actual day of the festival (special em-

reinforced by other people who have their own spe-

phasis goes out to this form of communication)

cific tasks. Generally, the cities are chosen by taking into account, among others, the following criteria:

In addition, in the cities where Ciné Droit Libre film societies have been established, the mobile cinema

The topicality of the themes and the extent to which

they relate to the problems of the respective city

The theme and the language of the films

films on offer. At this moment, Ouahigouya and Bo-

The availability of invited guests who are informed in

bo-Dioulasso are the two cities that are livened up

the area of human rights

by the monthly activities of these very film societies. Moreover, partnerships with the Olvida Library in Ouahigouya and the French Institute in Bobo-Dioulasso allow Ciné Droit Libre to organise the screen-

The equipment used consists of a sound system, a

ings through adequate frameworks and to benefit

video projector, a generator and a small light unit. We

from the communication activities of these two insti-

just acquired an open-air cinema. For transport we

rent 4x4 vehicles. Another effective mobilisation strategy upon which

The mobilisation strategy is based on the public

bates (film concerts) and above all, performances

space and its unrestrained access, on the quality of

by committed artists who prove to be very popular,

others. Since its inception, Semfilms has supported engaged artists that have been censored by the

One of the recurrent difficulties of the mobile cinema

(web tv: www.droitlibre.tv) for the promotion and dis-

programme is getting permission to occupy the urban

tribution of their works.

spaces for the film screenings and debates. In some cases, the authorities called the engagement of the

festival into question and were reluctant to authorise

such as a concert by the Grandes Gueules (“the

the occupation of these public spaces. This has lead

Loudmouths”) stand-up comedy and the onstage

to tough negotiations time and again. To counteract

providing of information about human rights. The

this situation, Semfilms has teamed up with a dozen

presence of artists that are renowned among youth,

tions, youth movements, and trade unions, and relies on their efforts and synergy.

Since 2013, Ciné Droit Libre has extended its successful concept of the ‘‘Festival Village’’ in Bobo-Di-

These strategic partners of the festival take on the re-

sponsibility of requesting authorisation to occupy the

popular neighborhoods. In addition to the screenings,

public spaces. In return, Semfilms helps out these or-

people can have a drink, eat kebabs, watch concerts

or stand-up comedy, and participate in discussions.

ble to them and by offering them free training courses

The cinema screenings and debates, along with the

during the festival on the use of videos and the inter-

concerts, act as a springboard for other forms of

net in relation to the promotion of human rights.

communication for the protection of human rights, such as the collection of signatures for petitions, etc.

Each night, between 2,000 and 7,000 people attend the activities at the Festival Village.

Over the last seven years, the extension of the Ciné Droit Libre festival has proved that the mobile cinema

Obviously, with such big crowds these discussions are

programme remains one of the rare opportunities for

different from the discussions we organise indoors.

an open debate in the provinces. It gives a voice to

Yet, we manage to organise good discussions with in-

the people of the inlands of Burkina Faso, who, little

teresting resource people as our guests. Usually, there

by little, have overcome their fear and denounced all

are also plenty of questions from the audience.

violations of their fundamental rights. Every year the 180

festival is taken to seven different cities to screen the

A 2013 survey on the impact of the Ciné Droit Libre

best films of the festival. The most popular films are

festival, carried out in the capital Ouagadougou and

films that focus on land issues, political films on cor-

several other cities where cinema screenings have

ruption and mismanagement, or movies that portray

In three years time, the festival has reached out to

Around 64% of the respondents consider that the

festival has instilled in them respect for the values of human rights and freedom of expression.

Around 41% of the respondents think that the festi-

tact with the isolated inland population. Year after

val has advocated for consolidating the democracy

year, the festival has shown its relevance and value

Around 35% of the respondents believe that the festival has contributed to good governance.

ganisers attach particular importance to it. 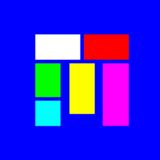