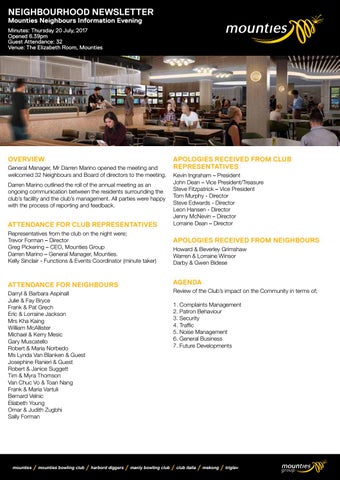 OVERVIEW General Manager, Mr Darren Marino opened the meeting and welcomed 32 Neighbours and Board of directors to the meeting. Darren Marino outlined the roll of the annual meeting as an ongoing communication between the residents surrounding the club’s facility and the club’s management. All parties were happy with the process of reporting and feedback.

AGENDA Review of the Club’s impact on the Community in terms of;

- Traffic flow has been successful with the new Humphries road club entrance for arrivals and departures keeping the noise level and traffic management to a minimum.

- Strict management procedures and guidelines are in place to ensure the traffic during construction is minimal No complaints or feedback received 5. Noise Management - Mounties have received positive feedback from neighbours regarding the levels of noise coming from the club throughout the year with construction work and patron behaviour

No complaints or feedback received

No further complaints or feedback received 2. Patron Behaviour - Neighbours were advised that anti-social behaviour has been reduced significantly due to the hard work of the board, management, staff and security.

6. General Business Floor is opened up the all attendees for general discussion. No feedback or complaints were received

- Positive feedback has been provided regarding the security boundary car that is patrolling the area. It has been advised that the car has helped with decreasing poor patron behaviour in the area.

- Mounties have just started with the interior refurbishment of the gaming floor which will continue for the next 18 months. - Underground carpark was meant to start this July but has now been pushed back to July 2018 due to cash flow and the size of the project

No complaints or feedback received