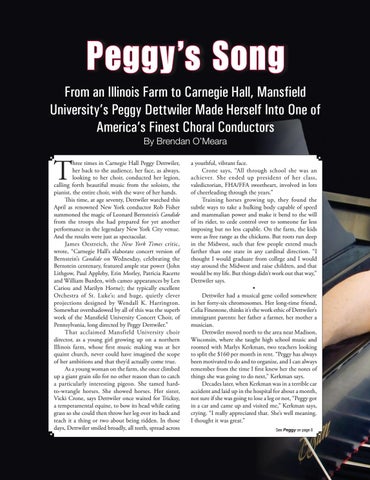 Peggy’s Song From an Illinois Farm to Carnegie Hall, Mansfield University’s Peggy Dettwiler Made Herself Into One of America’s Finest Choral Conductors By Brendan O’Meara

hree times in Carnegie Hall Peggy Dettwiler, her back to the audience, her face, as always, looking to her choir, conducted her legion, calling forth beautiful music from the soloists, the pianist, the entire choir, with the wave of her hands. This time, at age seventy, Dettwiler watched this April as renowned New York conductor Rob Fisher summoned the magic of Leonard Bernstein’s Candide from the troops she had prepared for yet another performance in the legendary New York City venue. And the results were just as spectacular. James Oestreich, the New York Times critic, wrote, “Carnegie Hall’s elaborate concert version of Bernstein’s Candide on Wednesday, celebrating the Bernstein centenary, featured ample star power (John Lithgow, Paul Appleby, Erin Morley, Patricia Racette and William Burden, with cameo appearances by Len Cariou and Marilyn Horne); the typically excellent Orchestra of St. Luke’s; and huge, quietly clever projections designed by Wendall K. Harrington. Somewhat overshadowed by all of this was the superb work of the Mansfield University Concert Choir, of Pennsylvania, long directed by Peggy Dettwiler.” That acclaimed Mansfield University choir director, as a young girl growing up on a northern Illinois farm, whose first music making was at her quaint church, never could have imagined the scope of her ambitions and that they’d actually come true. As a young woman on the farm, she once climbed up a giant grain silo for no other reason than to catch a particularly interesting pigeon. She tamed hardto-wrangle horses. She showed horses. Her sister, Vicki Crone, says Dettwiler once waited for Tricksy, a temperamental equine, to bow its head while eating grass so she could then throw her leg over its back and teach it a thing or two about being ridden. In those days, Dettwiler smiled broadly, all teeth, spread across

a youthful, vibrant face. Crone says, “All through school she was an achiever. She ended up president of her class, valedictorian, FHA/FFA sweetheart, involved in lots of cheerleading through the years.” Training horses growing up, they found the subtle ways to take a hulking body capable of speed and mammalian power and make it bend to the will of its rider, to cede control over to someone far less imposing but no less capable. On the farm, the kids were as free range as the chickens. But roots run deep in the Midwest, such that few people extend much farther than one state in any cardinal direction. “I thought I would graduate from college and I would stay around the Midwest and raise children, and that would be my life. But things didn’t work out that way,” Dettwiler says. • Dettwiler had a musical gene coiled somewhere in her forty-six chromosomes. Her long-time friend, Celia Finestone, thinks it’s the work ethic of Dettwiler’s immigrant parents: her father a farmer, her mother a musician. Dettwiler moved north to the area near Madison, Wisconsin, where she taught high school music and roomed with Marlys Kerkman, two teachers looking to split the $160 per month in rent. “Peggy has always been motivated to do and to organize, and I can always remember from the time I first knew her the notes of things she was going to do next,” Kerkman says. Decades later, when Kerkman was in a terrible car accident and laid up in the hospital for about a month, not sure if she was going to lose a leg or not, “Peggy got in a car and came up and visited me,” Kerkman says, crying. “I really appreciated that. She’s well meaning. I thought it was great.” See Peggy on page 8 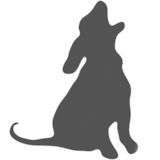 "Peggy's Song" by Brendan O'Meara. From an Illinois farm to Carnegie Hall, Mansfield's University's Peggy Dettwiler made herself into one of...

"Peggy's Song" by Brendan O'Meara. From an Illinois farm to Carnegie Hall, Mansfield's University's Peggy Dettwiler made herself into one of...