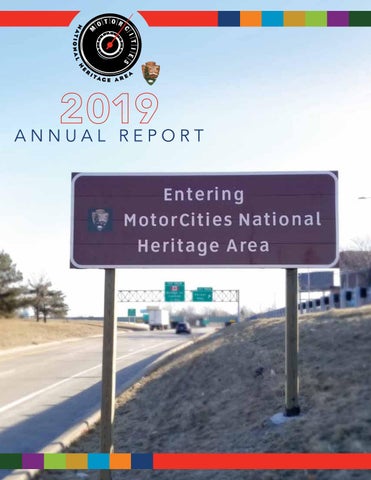 Welcome to the MotorCities National Heritage Area Partnership 2019 Annual Report. This past year was full of accomplishment for us, the culmination of many years of work on a number of key projects.

It’s always important to thank you, our continually-growing number of supporters, whether you’re a partner, member, sponsor or volunteer, for everything you’ve done during the past year to help us fulfill our mission of promoting and preserving Michigan’s rich automotive and labor history. With your help, MotorCities makes a profound impact throughout all 16 counties of the National Heritage Area. You can read more in this report about our many accomplishments, like the following: • Getting the first nine of our long-awaited highway signs in the ground; • Breaking ground for the Fort Street Bridge Interpretive Park in southwest Detroit; • Awarding our first-ever mini-grants, providing support up to $1,500 to short-term, high impact projects; • Hosting the spring meeting of the Alliance of National Heritage Areas, an opportunity to showcase our region’s automotive history and partnerships with days focusing on Detroit, Dearborn and Flint; • Working with seven Detroit area-based tour operators to establish a series of MotorCities-branded automotive tour experiences; • Launching our Speakers Bureau to bring more awareness of MotorCities and automotive history to the region. In 2020, our focus area is education, and we are working hard to bring new education programs to our National Heritage Area, while supporting key initiatives via our grant awards. We are making progress on so many fronts, and we thank you for all you do on behalf of MotorCities. Let’s take that positive momentum and keep moving forward. Your support is imperative as we do the important work of preserving and promoting our unique automotive and labor heritage!

Michael O’Callaghan Chairman, Board of Directors

Lansing Mayor Andy Schor welcomes MotorCities board, members and friends to his city for the 2019 Annual Meeting at the R.E. Olds Transportation Museum.

of every dollar goes directly into programs for MotorCities NHA

9 Highway Signs Installed Around Lansing, Flint and Detroit Drivers in metro Detroit, as well as the Flint and Lansing areas, are noticing something new along the highways – those familiar brown National Park Service signs with a message welcoming them to the MotorCities National Heritage Area! The first nine signs were installed in November and December 2019 and are the culmination of many years of work with the Michigan Department of Transportation.

Congresswomen Debbie Dingell and Rashida Tlaib join MotorCities Executive Director Shawn Pomaville-Size and representatives from the FortRouge Gateway Coalition (FRoG) put shovels in the ground at the site of what will soon be the Fort Street Bridge Interpretive Park in southwest Detroit.

On October 9, 2019, MotorCities staff and board members joined Congresswomen Debbie Dingell and Rashida Tlaib, our partners in the Fort-Rouge Gateway Coalition (FRoG), and Friends of the Rouge to break ground for the new Fort Street Bridge Interpretive Park, located at the foot of the Fort Street Bridge in southwest Detroit. On March 7, 1932, during the Great Depression, auto workers organized a march from Detroit to the Ford Rouge Factory in Dearborn. Known as the Ford Hunger March, the event is one of the most significant events leading to the creation of the United Auto Workers union. MotorCities, the University of Michigan-Dearborn, City of Detroit, City of Dearborn, Marathon Petroleum Co. LP, Michigan Department of Transportation, United Auto Workers Local 600, Friends of the Rouge, Friends of the Detroit River, various neighborhood block groups, PEA Inc. and others collaborated to build this park.

or individuals who have delivered outstanding projects in the areas of auto or labor heritage tourism, education/ interpretation and revitalization. The 2019 Milestone Award went to U.S. Senator Debbie Stabenow for her leadership that lifted the cap on the amount of appropriations that MotorCities can accept, paving the way for the organization to continue normal operations for four more years.

2019 Awards of Excellence Winners: (Left to right) MotorCities Executive Director Shawn Pomaville-Size, Leonard Kata of SAE International, Back to the Bricks Founder Al Hatch, Jill Engel of the Partnership for the Arts and Humanities, and MotorCities Chairman Michael O’Callaghan.

On October 30, MotorCities presented its 2019 Awards of Excellence during its sixth annual Michigan Auto Heritage Day event at the State Capitol Building. The awards recognize organizations

our region’s automotive and labor history first hand, while learning about revitalization projects and partnerships with days focusing on Detroit, Dearborn and Flint.

MotorCities launched a Speakers Bureau in 2019, a resource to promote awareness of automotive and labor history, as well as provide an overview about our organization and its important work. The offerings include 21 unique presentations offered by seven different presenters.

A Ford Model A used by Antique Touring Company, one of MotorCities new partners, to provide their unique auto heritage tour experience, entitled “From Tinkerers to Titans in the Auto Age.”

MotorCities-Branded Tours Launched MotorCities partnered with seven metro Detroit tour operators to offer a series of auto-themed historical tours. The experiences included tours in a Ford Model A, on a bicycle, on a bus, and on a kayak in the Detroit River, along with standard walking tours. Collectively, the tours reached more than 400 people in its inaugural season.

revitalization of the Packing Proving Grounds (PPG) site, including the Packard Museum and an Arsenal of Democracy Museum.

Students learn about how U.S. Army soldiers trained at Historic Fort Wayne during Every Kid Outdoors week in May.

MotorCities joined the Detroit Parks and Recreation Department, Detroit Public Schools Community District, the Historic Fort Wayne Coalition and more than 20 other partners to present the fourth annual Every Kid Outdoors program at Historic Fort Wayne in southwest Detroit in May. More than 1,000 fourth graders participated in the program.

The artists from the Services to Enhance Potential (STEP) exhibit at the Peace Gallery in Detroit.

OUR ME MBE R S

MEMBERSHIP BENEFITS Members joining for 2020 also have expanded benefits, as 17 of our partner attractions offer admission or gift shop discounts for MotorCities members showing their card. The attractions include:

Details on the specific discounts can be found at MotorCities.org/Membership.

Back to the Bricks

MotorCities Board Member and Speakers Bureau Presenter Russ Dore (center) as Thomas Edison with “Henry Ford” (left) and “Harvey Firestone” (right) in his presentation of “Henry and Friends.”

In August, the Detroit Entertainment Commission, Hagerty Insurance, MotorCities National Heritage Area and the Ford Piquette Avenue Plant worked together to restore and re-dedicate the Michigan Historic Marker commemorating the first mile of concrete highway in the world, running along Woodward Avenue between McNichols and Seven Mile Road in Detroit. On the left side of the sign, from left to right: Alex Rapanos, Territory Manager, Hagerty Insurance; David Flatt, Executive Director, Ford Piquette Avenue Plant; Martha G. Scott, Wayne County Commissioner; and Gregory J. Reed of the Detroit Entertainment Commission. Brian Yopp, Director of Programs &amp; Operations for MotorCities is standing to the right of the sign, and Marcell Todd, Director, City of Detroit Planning Commission and Historic Designation, at the far right.

At the conclusion of MotorCities September board meeting at the Michigan Firehouse Museum in Ypsilanti, Executive Director Shawn Pomaville-Size, flanked by board members, signed the contract with Action Traffic Maintenance of Flint to produce and install 15 MotorCities highway signs. (Below) Singer-songwriter Audra Kubat performs at the 3rd Annual March On! Blues Collar Poetry and Music Festival, held at UAW Local 600 in Dearborn. The March 2019 event benefitted efforts to build the Fort Street Bridge Interpretive Park.