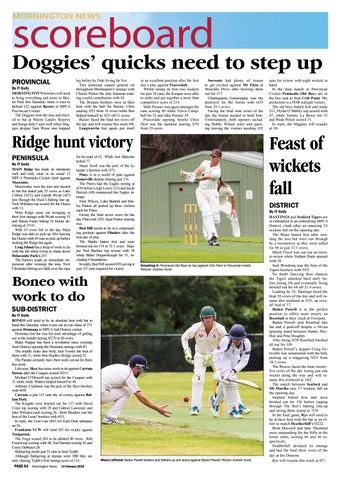 By IT Gully MORNINGTON’S bowlers will need to bring everything and more to Baxter Park this Saturday when it tries to defend 122 against Baxter in MPCA Provincial Cricket. The Doggies won the toss and elected to bat at Wayne Landry Reserve and things didn’t start well when Doggies skipper Sam Wiese was trapped

leg before by Dale Irving for five. This dismissal caused general rot throughout Mornington’s innings with Charlie Parker the only batsman making a solid contribution with 34. The Brittain brothers were at their best with the ball for Baxter, Chris snaring 3/25 from 16 overs while Ben helped himself to 3/25 off 11 overs. Baxter faced the final ten overs off the day and will resume this week 0/8. Langwarrin has again put itself

in an excellent position after the first day’s play against Pearcedale. Whilst losing its first two wickets for just 18 runs, the Kangas were able to settle and put together a more than competitive score of 219. Matt Prosser was again amongst the runs scoring 89 while Travis Campbell hit 52 and Jake Prosser 34. Pearcedale opening bowler Chris Dew was the standout snaring 5/59 from 29 overs.

Sorrento had plenty of reason to get excited against Mt Eliza at Wooralla Drive after bowling them out for 117. Chathupama Gunasinghe was the destroyer for the Sorras with 6/29 from 20.1 overs. Facing the final nine overs of the day the Sorras needed to hold firm. Unfortunately, both openers including Bobby Wilson were sent packing leaving the visitors needing 102

By IT Gully MAIN Ridge has made its intentions well and truly clear in its round 12 MPCA Peninsula Cricket clash against Mooroduc. Moorooduc won the toss and elected to bat but lasted just 25 overs as Luke Collins (3/15) and Gareth Wyatt (4/7) tore through the Duck’s batting line up. Nick Williams top scored for the Ducks with 13. Main Ridge came out swinging in their first innings with Wyatt scoring 55 and Shaun Foster hitting 43 before declaring at 7/141. With 19 overs left in the day Main Ridge was able to pick up 3/64 leaving the Ducks with 40 runs to pick up before making the Ridge bat again. Long Island has a heap of work to do with the bat when it tries to chase down Delacombe Park’s 247. The Parkers made an immediate impression after winning the toss, Nick Christides belting six balls over the rope

for his total of 65. While Joel Malcolm belted 77. Stuart Swift was the pick of the Islander’s bowlers with 5/71. Pines is in a world of pain against Somerville despite chasing just 174. The Piners had the Eagles reeling at 4/39 before Leigh Lowry (35) and Jayde Herrick (48) resurrected the Eagles innings. Nick Wilcox, Luke Bartlett and Harley Parker all picked up three wickets each for Pines. Facing the final seven overs for the day Pines lost 3/20, Sean Parker snaring two. Red Hill seems to be in a commanding position against Flinders after the first day of play. The Sharks batted first and were bowled out for 174 in 72.1 overs. Skipper Neil Barfuss top scored with 58 while Blake Hogan-Keogh hit 31, including 6 boundaries. In reply, Red Hill scored 0/20 giving it just 151 runs required for victory.

Boneo with work to do SUB-DISTRICT

By IT Gully BONEO will need to be its absolute best with bat in hand this Saturday when it sets out its run chase of 271 against Dromana in MPCA Sub District cricket. Dromana lost the toss but took advantage of getting out in the middle lasting 9/270 in 80 overs. Blake Pappas has been a revelation since crossing from District opening the Dromana innings with 83. The middle order also fired, Jack Fowler the best of them with 35, while Ben Bradley-Bridge scored 32. The Pandas certainly have their work cut out for them this week. Likewise, Skye has some work to do against Carrum Downs after the Cougars scored 9/253. Michael O’Driscoll top scored for the Cougars with 51 while Jordy Watters helped himself to 40. Anthony Craddock was the pick of the Skye bowlers with 4/58. Carrum is just 115 runs shy of victory against Ballam Park. The Knights were bowled out for 157 with David Cross top scoring with 28 and Gabriel Lawrence and Jake Williams each scoring 26. Brett Moulten was the best of the Lions’ bowlers with 4/51. In reply, the Lion’s are 0/43 wit Zach Dent unbeaten on 26. Frankston YCW will need 205 for victory against Tootgarook. The Frogs scored 204 in its allotted 80 overs. Rob French top scoring with 48, Tod Harnett scoring 42 and Corey DeBruyn 28. Balnarring needs just 35 runs to beat Tyabb. Although Balnarring at stumps were 5/80 they are only chasing Tyabb’s first innings score of 114.

runs for victory with eight wickets in hand. In the final match in Provincial Cricket Peninsula Old Boys are in the box seat to beat Crib Point. My prediction is a POB outright victory. The old boys batted first and made 212, Dylan O’Malley top scored with 47, while Tommy La Brooy hit 32 and Wade Pelzer scored 31. In reply, the Magpies will resume at 1/6.

Misery inflicted: Baden Powell bowlers and fielders up and about against Baden Powell. Picture: Andrew Hurst

By IT Gully HASTINGS and Seaford Tigers are in embattled in an enthralling MPCA District clash after an amazing 23 wickets fell on the opening day. The Blues batted first after winning the toss but were run through by a locomotive as they were rolled for 90 in just 37.5 overs. Mitch Floyd was run out on twenty-seven while Nathan Hunt opened with 20. Jack Brooking was the best of the Tigers bowlers with 5/25. No doubt fancying their chances the Tigers attacked hard early before losing 3/6 and eventually being bowled out for 68 off 21.4 overs. Leading by 22, Hastings faced the final 20 overs of the day and will resume this weekend at 3/35, an overall lead of 57. Baden Powell is in the perfect position to inflict more misery on Rosebud in their clash at Overport. Baden Powell sent Rosebud into bat and it paid-off despite a 58-run opening stand between Danny Heylbut and Pete Doughty. After being 0/58 Rosebud finished all out for 109. Baden Powell’s skipper Craig Entwistle was sensational with the ball, picking up a staggering 9/25 from 18.5 overs. The Braves faced the final twentyfive overs of the day losing just one wicket along the way and will resume this weekend at 1/62. The match between Seaford and Mt Martha saw 17 wickets fall on the opening day. Seaford batted first and were bowled out for 126 before ripping through The Red’s batting line-up and seeing them slump to 7/29. In the final game, Rye will need to be at their best with the bat in an effort to match Heatherhill’s 9/222. Brett Maxwell and Jake Theobold were outstanding for the Hills in the lower order, scoring 66 and 46 respectively. Heatherhill declared its innings and had the final three overs of the day at the Demons. Rye will resume this week at 0/7.